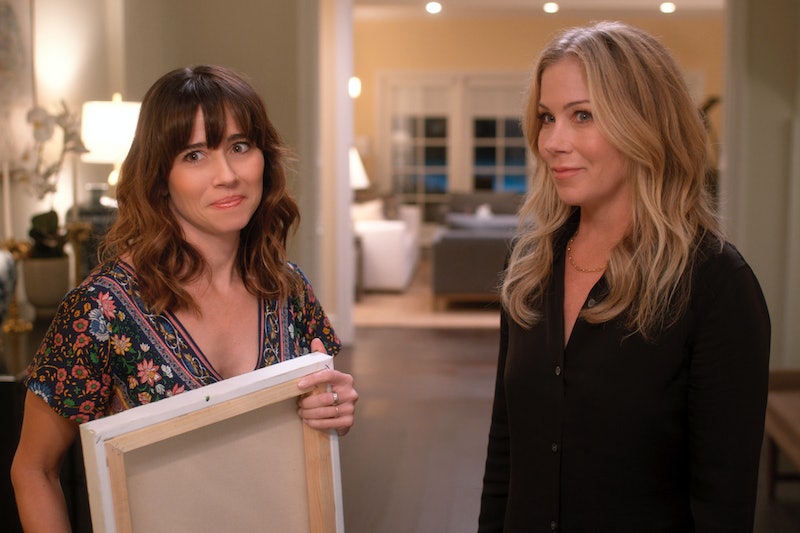 Following that murderous finale cliffhanger, Netflix's Dead to Me Season 2 teaser finally revealed when fans will get some answers, announcing that the dark comedy series will come back with new episodes on Friday, May 8. Starring Christina Applegate and Linda Cardellini, Dead to Me's sophomore season will include higher stakes, deeper friendship. And, as Netflix teased in a press release, "traumas that bond" will loom larger than ever before.

In the 40-second teaser trailer, fans are reminded of the bloody Season 1 events that led to both Jen and Judy's husbands' deaths. The bigger shocker of the two, of course, was the season-ending reveal that — spoiler alert — Jen had just shot and killed Steve (James Marsden), who laid bleeding in her backyard pool. Sitting in a diner, Judy encourages her newly reconciled friend to "stay focused on the positive."

True to form, Jen snaps back, "We are not in Snow White; we are in f*cking Scarface." Well, maybe they're somewhere in between. According to the official Dead to Me Season 2 synopsis, new episodes will pick up right where Season 1 left off. They will also introduce a new character who could end up revealing all of Jen and Judy's secrets, Detective Perez, played by Dina Maria Riva, who is "hot on their heels."

Netflix renewed Dead to Me for a second season in June 2019, and Applegate scored a 2019 Emmy nomination for Outstanding Lead Actress in a Comedy Series the following month. "I was like, 'There is no way,'" Applegate told People of her Emmy nod in July. "Yes, people have been really, really complimentary of the show and that's felt really nice because it doesn't always happen like that, but still I was like, 'How'd I squeeze in there?'" (The category's other nominees included: Rachel Brosnahan for The Marvelous Mrs. Maisel, Julia Louis-Dreyfus for Veep, Natasha Lyonne for Russian Doll, Catherine O'Hara for Schitt's Creek, and eventual winner Phoebe Waller-Bridge for Fleabag.)

For her part, Cardellini previewed Dead to Me's second season to The Hollywood Reporter in November, saying, "There are definitely going to be more secrets and more twists and turns, so we can count on that."

More like this
An 'Emily In Paris' Fave Is Joining Season 5 Of 'The Crown'
By Bustle Editors
Does Umbrella Academy Season 3 Have A Post-Credits Scene? The Answer Will Surprise Fans
By Brad Witter
Don't Expect To See Your Fave Modern Royals Depicted On 'The Crown' Season 6
By Jack Irvin
The 'Stranger Things' Writers Revealed 2 Tragic Unscripted Finale Moments
By Grace Wehniainen
Get Even More From Bustle — Sign Up For The Newsletter