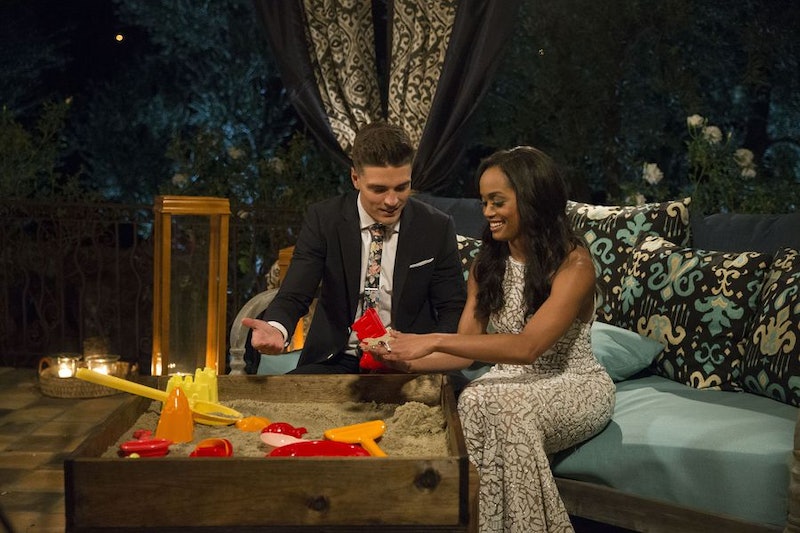 Just to get this out of the way — I judged Dean hard when he said that whole “once you go black, you can’t go back” thing to Rachel when they met on After The Final Rose, but I’m pulling it back and thinking of it as perhaps a producer suggestion or just a stupid joke he thought would land better. Because Dean is nice and kind and sweet and gets along very well with Rachel, and the fact that he’s 25 doesn’t come into play here. On Dean and Rachel’s one-on-one date, the two were just sipping champagne on the hood of a car when a blimp landed in front of them and they were told to hop on. Oh, and Dean’s biggest fear? Heights.

Dean, mature man that he is, handled it like a champ. He wanted Rachel to hold his hand, but then when the pilots invited Rachel and Dean to hop in the co-pilot seat and test it out, Dean took to it like a duck on water. Later, Dean recounted his tumultuous adolescence with a focus on when his mother passed away (he was only 15), and he made everyone cry. From where I stand, Dean’s kindness and openness toward giving this thing with Rachel a go puts him miles ahead of some of his Bachelorette peers. The other men in the house are screaming and metaphorically swinging their you-know-whats around, and Dean is just being cute, doing him, and opening up to Rachel.

Ultimately, it’s Rachel’s decision on whom she wants to date, and if she thinks that Dean is her person, he is her person. Their seven-year age difference isn’t the end of the world. They are both adults, and it’s fun and sweet to watch this romance blossom into something more — so everyone else can back off.