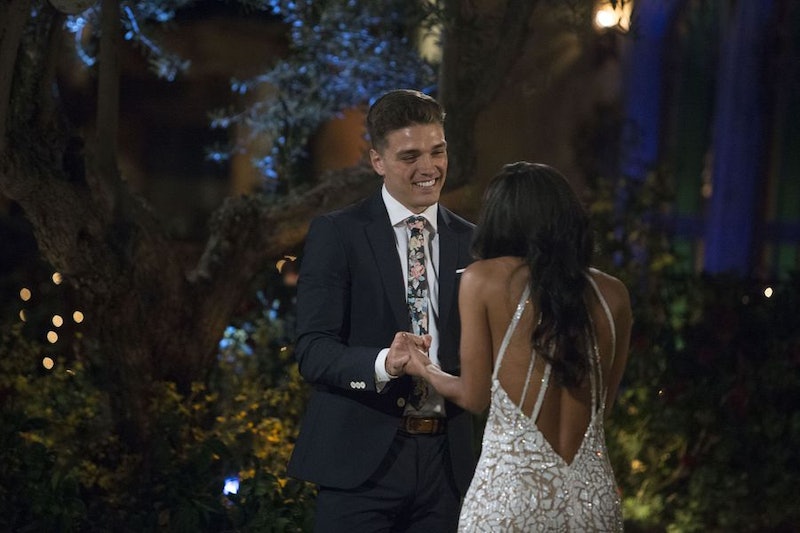 When Rachel Lindsay was named the newest Bachelorette, she stepped into a whole new world of reality television. Sure, there have been, like, 500 seasons of The Bachelor and The Bachelorette, but Rachel is the first black lead of the show. It’s big news for a show that has been consistently vilified by the public for its lack of inclusiveness (before Rachel made it to the final four on Nick Viall’s season of The Bachelor, no black woman had ever made it past the middle of the season on the show). But there's something majorly disappointing about this "historic" season, and that's Bachelorette contestant Lee who had some allegedly racist and misogynistic tweets on his (now-private) Twitter profile. But Dean has his eye on Lee on The Bachelorette, and Twitter is all for it.

Let me back up a bit — after the show had already started airing, a recent string of tweets, allegedly from Lee’s Twitter account, came to light. Screenshots taken by websites like Huffington Post before the account was made private show Lee allegedly making comments dubbing the NAACP racist, decrying feminism, and more. When Bustle reached out about these alleged tweets, ABC and Warner Bros. declined to comment. A rep for Lee could not be reached.

That, coupled with Lee's behavior on the show has been making a lot of fans uncomfortable — especially on a season that's supposed to be so groundbreaking. That's when Dean, sweet, sweet Dean, showed up. When Dean thought that Lee was picking fights with certain members of the contestant pool, he made the following claim to a producer during a talking head:

“Lee likes to get under people's skin and the people's skin that he's getting under, they're my friends, people I respect ... The only people I've seen Lee pick fights with are ... not the people he's used to seeing on a daily basis ... from a cultural perspective.”

When pressed by a producer to explain, Dean said, “You know exactly what I mean when I say that. The longer Lee sticks around the more everyone will be aware of his intolerance.” Dean is apparently not afraid to call someone out for what he perceives as intolerance in the house, and Twitter is all there for it.

We're not far into this season of The Bachelorette, and things are already so complicated. What does all of this mean for Rachel and her quest for love? I guess we have to wait and find out. But, in the meantime, props to Dean for standing up for what he believes in.