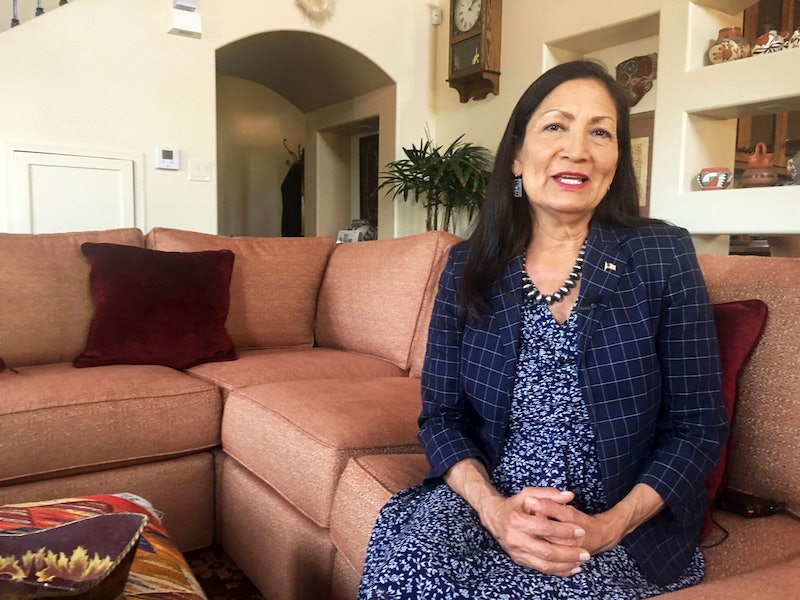 One of the first Native American women elected to Congress has responded to President Donald Trump's tweet mocking Sen. Elizabeth Warren. Rep. Deb Haaland, a Democrat who represents New Mexico, told CNN on Monday that she believed that Trump's tweet about the Massachusetts senator was in reference to the Trail of Tears, a federally-forced displacement of hundreds of thousands of Native Americans from their ancestral homelands in the 1830s that resulted in thousands of deaths.

"It's evident to me that he is just completely ignorant when it comes to Native Americans, Native American history," Rep. Haaland told CNN's Kate Bolduan. "It's completely exhausting to try to keep up with so much of his ignorance and racism for Native people, and at this point, I feel like he needs to be ignored because he is not learning."

Haaland added, "It'd be nice if he picked up a book and decided to read about Indian history. He would not be mocking anyone if he knew more."

On Saturday, Trump tweeted, "Today Elizabeth Warren, sometimes referred to by me as Pocahontas, joined the race for President. Will she run as our first Native American presidential candidate, or has she decided that after 32 years, this is not playing so well anymore? See you on the campaign TRAIL, Liz!" Trump's tweet quickly received intense backlash on Twitter, where users condemned him for mocking a historical event that's regarded as an act of genocide.

In early February, Warren gave an interview to The Washington Post about her decision to identify as Native American over the years, and apologized for doing so. "I can’t go back," she told the publication. "But I am sorry for furthering confusion on tribal sovereignty and tribal citizenship and harm that resulted."

CNN's Bolduan asked Haaland about Warren identifying as a Native American in the past — and if that ever bothered her. The New Mexico representative said that she didn't believe Warren was seeking to become an enrolled member of a tribe by citing her ancestry.

On top of that, Haaland told Bolduan, "I would never tell anyone how they should identify themselves. That is what someone decides on their own. What I know about Sen. Warren is that she has fought for working families for a heck of a long of time. She has returned billions to American who have been ripped off by big banks." And it was that kind of diligence and loyalty that Haaland said she hoped Warren would keep up.