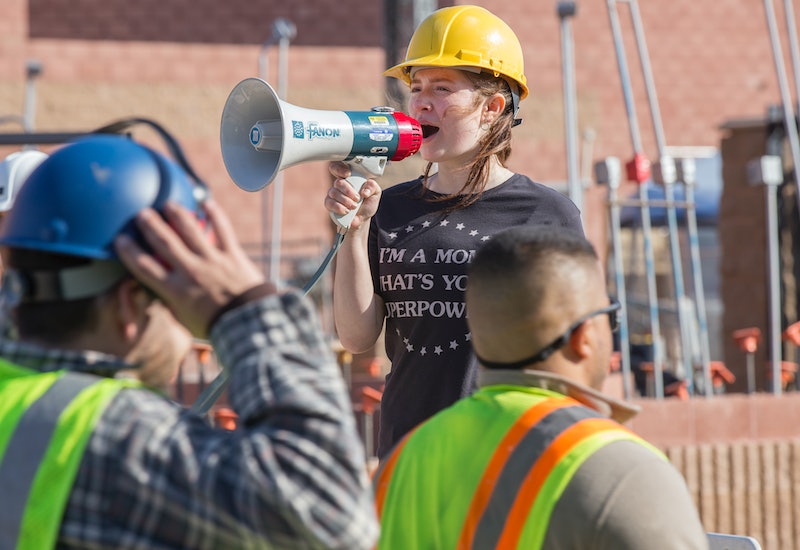 She wouldn't be Debbie Gallagher if she wasn't relentlessly fighting for something — for a voice among her older siblings, for money, for proper childcare, for education, for love... the list goes on. Like all of the Gallaghers, she was forced to step into the ring at a young age, and therefore, grow into her big girl pants long before most people in the world know they exist. And although her achievements via motherhood, education, and financial independence raise a triumphant, metaphoric middle finger to today's expectations of women, Debbie's story in Season 9 of Shameless is, sadly, not as empowering as it could be.

I know what you're thinking. Nobody's perfect, and the season isn't over just yet. Those are two totally valid points, but you have to address the obvious. Debbie's story attempts to join the real, ongoing conversation around womanhood in 2018 by tackling equal pay, queerness, and the patriarchy in general. But so far, it lacks the depth it needs to serve the movement in a legitimate way.

Again, I know what you're thinking. It's just TV, and Shameless is just a slapstick dramedy that pokes fun at the sociopolitical climate in which it exists. That's what TV does — I get it. But unlike in many other Gallagher stories that eerily mirror reality (Frank's campaign manager role in "making Chicago white again," his immigrant smuggling business, Ian and Trevor's homeless shelter efforts for queer teens, to name a few), the writing always just seems to just dip its toes into Debbie's feminism, rather than giving it the time, the nuance, or the development it truly deserves.

It all starts when Debs gets a job working on site as a welder after fearlessly putting herself through trade school and amputating three — yes, three — of her toes thanks to a work-related accident, all by herself. In the first episode, coming off of a graveyard shift, she flops down at breakfast with her male coworkers. It's pay day, and one of them asks Vee at The Alibi to cash his check. Debbie quickly discovers her net pay is significantly less than the $720 he collects, and after recounting that they work the same hours, she deduces that her colleagues make three dollars greater on the hour. And she's pissed.

She storms out of the bar on a mission for equal pay, and at first, it's inspiring. But in the end, the extent of her activism is constructing an adult diaper to make up for her frequent bathroom visits (the boss' excuse for her docked pay), and welding metal penises to the hoods of men-owned vehicles. After those two radical retaliations, her fiery passion is pretty much snuffed.

That's when she meets Alex, another woman welder who helps her explore her sexuality. This refocus in Debbie's story, initially, seems like a great fit. Considering she spends so much time condemning the patriarchy in the beginning, their budding relationship gave viewers like me hope that they'd do it together, while falling in love. Instead, we only get to explore any of this at arms length.

Debbie spends much of the season's remaining time questioning her sexuality and rolling her eyes at stereotypical relationship problems with Alex, who is afraid of getting her heart broken by another straight girl. Even Debbie's brothers invalidate her decision to be gay. Meanwhile, she walks the house in a rainbow shirt that reads "Vagitarian," making her swift choice to come out as lesbian seem easy, which is a tone-deaf disservice to real queerness and the complicated nature of sexual discovery. Not to mention, the possibility or realness of bisexuality is hardly mentioned. In short, it's a story that could've given deserved representation and complex attention to the LGBTQ+ community, but instead, it merely brushes the surface of sensationalization.

In the little screen time Debbie does get compared to Frank's drawn out monologues and inebriated ventures that have little purpose and drag on throughout, Debbie could've done so much more. She could've offered some real life examples of how to advocate for women and minorities, which is something Shameless is more than capable of doing, and has seen characters do in the past — take Mickey Milkovich's coming out story and his struggle, or Trevor, a transgender man's grueling battle with obtaining the proper I.D. gender marker, for example.

But instead, Debbie spends much of her time eating pie at Patsy's, begrudgingly listening to Alex's skeletons from relationships passed, and saying very little at all. By the mid-season finale, she has faded into the background, which is perhaps the most striking metaphor of them all; she's fallen victim to the cycle of womanhood. Getting pissed, speaking out, being ignored, and fading back into the background where she feels like she belongs.

But in the end, it's not Debbie's fault. Nor is it her portrayer, Emma Kenney's. It's up to the creators and showrunners to redeem her story, and hopefully, they'll use the second half of the season to do just that. Hopefully, they remember that Debbie is a fighter, because as a woman gets older, her struggles only get bigger.