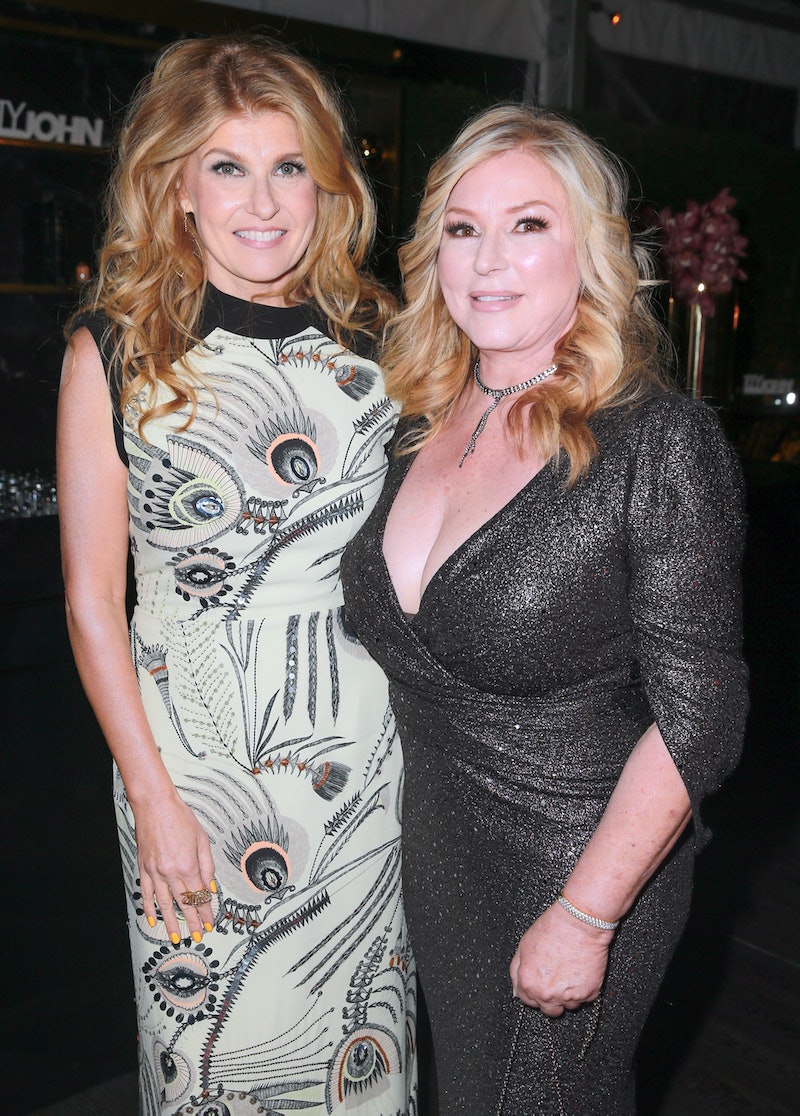 When Debra Newell agreed to share her story with Los Angeles Times reporter Chris Goffard, she never expected it to blow up. She thought the events of her traumatic relationship with John Meehan might, at most, take up a few inches of space on the fifth or sixth page of the newspaper she tells Bustle. But now, a hit podcast and a television dramatization later, Debra Newell hopes Dirty John helps other women who are struggling with abusive and manipulative relationships and she's glad it's had such an impact on people.

"My main goal of sharing my story is obviously to help others," Newell says over the phone in the days before Dirty John's series finale. "When you listen to the stats of coercive control, or just the amount of women that are killed constantly, this is such an important topic to share the awareness [and] share the signs."

Newell and Meehan shared a whirlwind romance, and were husband and wife before she found out about the restraining orders, threatening behavior, drug use, and jail time that plagued his past, as outlined by the Los Angeles Times' initial reporting. She wants people to know that sinister characters can disguise themselves as people who truly care for you, making them all the more dangerous. Later, when looking at signs of psychopathic behavior, Newell says, "he marked off all of them."

"Little did I know charm was one of them, amongst many, many other things," she continues. "So for me, I think it’s really important to get the awareness out there and realize how important this topic is."

Newell refers to the type of manipulation Meehan used as coercive control, which is still not a term used often enough when talking about different forms of domestic abuse. Though he might not have been physically abusive toward her, Meehan still was still alienating her from her family and concocting lies that allowed him to deeply usurp her peaceful life. She says she's been working with Laura Richards, an expert on domestic violence who worked to criminalize coercive control in the U.K., to better process what happened to her. "She’s been able to help me heal because she sort of understood what John did, and that it could happen to anyone," Newell says.

Laws surrounding coercive control in the U.S. have been on Newell's mind since her relationship with Meehan, as his lack of physical harm didn't lessen the trauma that ultimately befell her family. After she made great strides to cut Meehan out of her life, he ultimately attacked Newell's daughter, Terra, in a parking lot with a knife. Terra was injured but survived the brutal fight, and Meehan died as a result of her self-defense. "I think it’s really important to talk the laws of coercive control, and that is something we’re also looking at these days, is trying to pass a law," Newell continues. "Because I did go to four police stations, and they did nothing because I didn’t have a mark on me." That's mostly because of how our laws define "abuse," but Richards and others are workings towards change.

But that kind of misunderstanding also comes from regular people hearing her story who assume that there's something Newell could have "done" to prevent John from ever entering her life. Newell says she's received some pushback from podcast listeners and TV viewers who criticize her handling of the situation (and "ridicule" her and her daughters' voices, of all things), but she estimates that about 95 percent of those who contact her directly are sharing their own similar stories, or simply sending their support. She also thinks what's lost in the quick pace of an 8-episode series is the fact that there was much more going into her decisions than those naysayers ultimately see on TV. "Because I was in hiding for seven months, I also had a forensic psychiatrist working with me, two lawyers, and a guy that was a private investigator," Newell says. "So I was being told when to walk away, how to walk away, how to prepare myself so that I wasn’t in danger."

Otherwise, Newell, played by Connie Britton in the Bravo series, thinks the show did her story justice. She met with Britton multiple times ahead of filming, helping the actor nail down her voice and her gestures. The real-life Newell thinks she has a happier personality than her character does, but she understands why. "I think that I enjoy to laugh a lot," she shares. "But because of the subject matter being so serious, I feel like she had to be serious all the time."

Newell isn't back in the dating pool just yet. "I'm definitely taking a backseat for now. It's not the first thing on my list," she says with a laugh. She's been an interior designer for years, and she's eager to throw herself back into her career as the dust settles around Dirty John. But Newell will continue to be open about how John Meehan drove her life off the rails in the hopes that she can prevent the same from happening to other women.

"I’m going to be focusing on design," she says. "But also any time that anyone wants to talk about this, I’m more than willing if it’s going to help others."