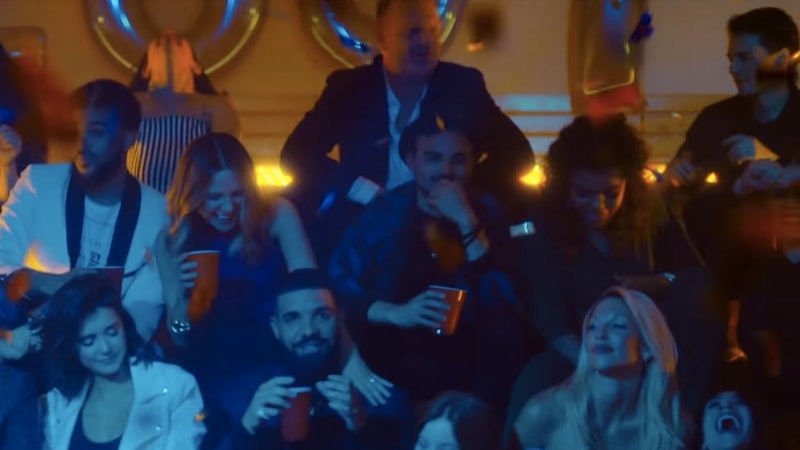 Hot off the heels of Drake's "I'm Upset" music video, which featured a reunion of the Degrassi: The Next Generation cast, there have been murmurs from eager fans about a potential reboot of the popular series. One cast member is making it clear that they'd be down for it. Actor Miriam McDonald would do a Degrassi reboot, according to her interview with E! News. The actor, who played Emma Nelson on the show, would head back to Degrassi high for one particularly exciting reason.

McDonald explained to the publication that if they did a reboot now, there would be a brand new spin on it, since they've all obviously changed since the show first came out. "I think we've all evolved as people too," she said, "so if there were to be something I think what we would bring to the table would actually be something quite different from what we did 5, 10, 15 years ago." She went on to say that it would be an "exciting concept" for the show.

When asked whether the rest of the cast would actually be down for a revival, she said there likely wouldn't be any problems wrangling everyone back together again. "I don't think there would be anyone out there that if there was an opportunity to do some sort of reboot in some sort of form, whatever form that may be," she said, "I don't think anyone would be quick to turn that down!" Well, that's definitely great news for any Degrassi fans out there. (And in the meantime, there's always the latest version of the franchise, Degrassi: Next Class on Netflix, to keep you occupied.)

McDonald's comments come shortly after Drake music video for "I'm Upset" was released on June 13, which featured a major reunion for the Degrassi cast. All of the actors (besides a few) joined in on the fun in his video. As cast members Shane Kippel (aka Spinner) and Ephraim Ellis (aka Rick) told TMZ, the whole production came together in such a short amount of time that it was nothing less than amazing. They explained they were notified about the reunion days before the video was shot, which they said took place over the June 9 weekend. It's pretty incredible that a something of such epic proportions was able to happen so quickly.

The reunion came as a huge, yet welcome surprise to just about every Degrassi fan out there. In fact, fans were so stoked to see the cast back in action again, that there were indeed whispers of a reboot for the teen drama. One fan even wrote on Twitter, "Can @Drake get a degrassi reboot goin." Another added, "I don't want a @Degrassi reboot after watching @Drake's video, I NEED it." And honestly, same.

Since fans are super into the idea of a reboot, they'll likely be glad to hear McDonald's comments about a potential Degrassi re-imagining. If you're familiar with the background of the drama, you would know that there's already a lot of precedence for a reboot if it were to happen. The series that McDonald, Drake, Kippel, and others were on was the series titled Degrassi: The Next Generation. Their show was itself was a spinoff of the original series in the '80s, Degrassi Junior High, as E! News pointed out.

And, of course, as mentioned earlier, the popular series was also rebooted back in 2016 under the title Degrassi: Next Class. But come on, nothing really compares to Degrassi: The Next Generation, which holds a special place to so many fans out there (as the response to Drake's video indicated). So, it's great to see that at least one of the cast members, McDonald, would be game for a reboot featuring the Next Generation cast, since fans are already clamoring for it.