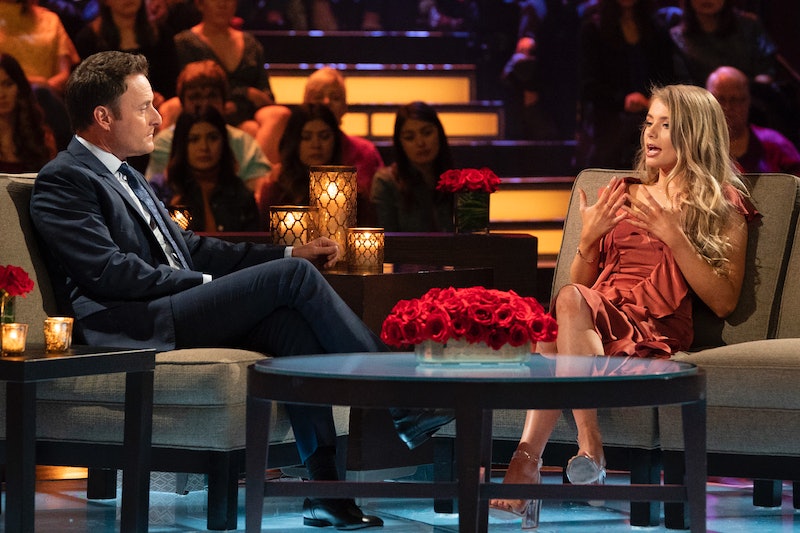 When the "Women Tell All" special rolls around at the end of every season of The Bachelor, you know the drama is coming, and this time, that drama was between Demi and Courtney — not that it was surprising, considering the fact that these two had drama while they were both still vying for Colton Underwood's affections. And now, they're picking up right where they left off. On Tuesday night. Courtney and Demi's fight on Colton's "Women Tell All," and this time, their fight was even more explosive than before.

During Demi's time on The Bachelor, she definitely took a more aggressive approach to claiming her time with Colton than others, and some women took offense to that, including Courtney, which led to Demi calling Courtney the "cancer" of the house. Don't worry — it doesn't seem like Courtney's forgotten about this, because when they had the chance to confront each other, things got seriously ugly. And although their fight on "Women Tell All" was definitely rooted in the feud that happened months ago during filming, it's probably safe to say that it was at least a little bit staged. It just played out a little too flawlessly for it not to be... even if the emotions behind it were real.

As soon as a clip was played of Courtney and Demi's feud on the show, Courtney came out swinging... and her anger didn't end there. At the very first opportunity she had to share her feelings, she told Demi exactly how she felt about being called "the cancer of the house, and she didn't hold anything back. She said:

"I don't understand what kind of person can coin a term that literally refers to an illness that takes the lives of so many. Did I deserve to be called something like that? Absolutely not. That was disgusting and it was vile. Did I think you were a lot of things? Yes, but never would I say something like that."

Demi definitely didn't coin that term, but it didn't seem to matter to Courtney. And even when Demi tried to apologize, Courtney kept interrupting her.

"It was a bit much," Demi said when she could finally get a word in. "You were more like bedbugs. I forgot you were there and then you kept annoying the f*ck out of me."

Of course, Courtney had to get the last word in — and it was all about the set up for a pretty big stunt she pulled. "Demi, you literally have the maturity of a three year old. All you do is talk about yourself and talk about other people all day," she said. "Back to time out. Back to time out, Demi." At that point, she proceeded to put a pacifier in Demi's mouth... and judging by Demi's reaction, this was probably staged because Demi was chill about the whole thing, only pretending to call security.

That seemed to be the end of it, until later on when Demi joked to Colton that she wanted to "introduce" him to Courtney. She was not pleased, and Colton was very, very confused.

Courtney and Demi's actual feud may never end, but it doesn't seem like Demi's going to let it bother her. Pacifier stunt or not, it looks like Demi's letting this one just roll right off her back. Onto the next drama, right?