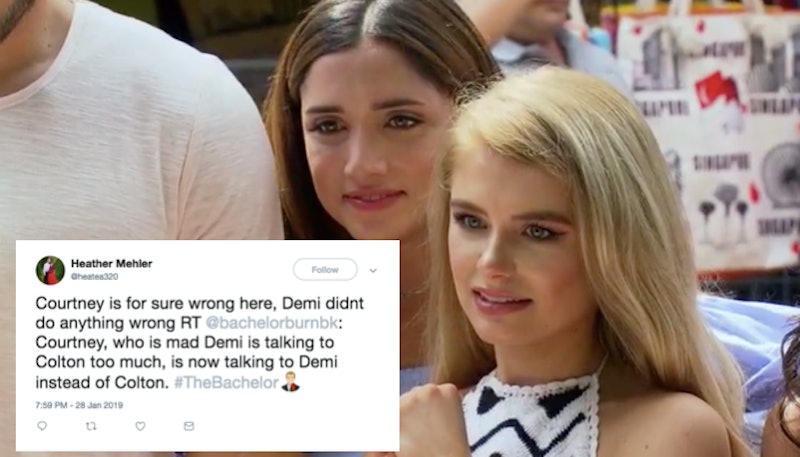 The Bachelor has been a part of the American television landscape for nearly two decades — every year, there are a few crops of young-ish men and women who try and find love (or sponsorship opportunities on national television). There's a formula to this game, and yet sometimes I find myself wishing that there was a Bachelor franchise handbook for the contestants who don't see to get it. For instance, Demi and Courtney's fight on The Bachelor really underscored the fact that luck on The Bachelor is made — not languished over.

Group dates are dreaded on The Bachelor for the sole reason that contestants don't get nearly enough time with Colton. That's where the whole "can I steal him for a sec" joke crept into the zeitgeist (Saturday Night Live even gets in on the action). You have to steal him because there's no time to talk! That's where Courtney and Demi's fight crept in. Demi is not afraid to walk up and grab her time with Colton, whereas Courtney sat like a bump on a log and waited to Colton to crawl to her on his knees and beg for a conversation. That's just not how this happens, girl. You have to jump in if you want to swim in the pool.

And that's precisely what Demi gently suggested to her fellow contestant, only for Courtney to rebuff her — hard. Not only did Courtney lecture Demi on being there for the right reasons, etc., etc, but Courtney also pulled out the "how old you are, anyway?" card when Demi was talking. That was rude, especially because Demi and Courtney are both literally the same age — they were both 23 when this was being filmed. So for Courtney to get on a high horse and demand respect when Demi was just trying to give her a few pointers on how to get Colton to notice her is a reach. A very big reach.

Here's the thing — wallflowers don't do well on shows like The Bachelor. They don't do well on any reality television shows. So if you would consider yourself a shy person or an introvert, you are better off watching The Bachelor and The Bachelorette from your couch because you will just not go far. The camera follows the people that make moves, and if the camera is not following you, you get left behind in the dust. Courtney spent more time picking a fight with Demi than she did trying to chat up Colton, which means that she is either not here for the right reasons (this is likely) or she just wasn't that into Colton (or screen time) anyway.

By the end of the episode, Demi had a group date rose and Courtney ended up sent back home to work on her catering business. And what have we learned here, folks? Being silent only works if you're being chased by monsters that hunt using the smallest, teeniest sounds. On The Bachelor, getting in a huge fight almost always gets you sent home. You talk to the Bachelor, and you ignore as best you can the other drama. It's a lesson Courtney had to learn the hard way.