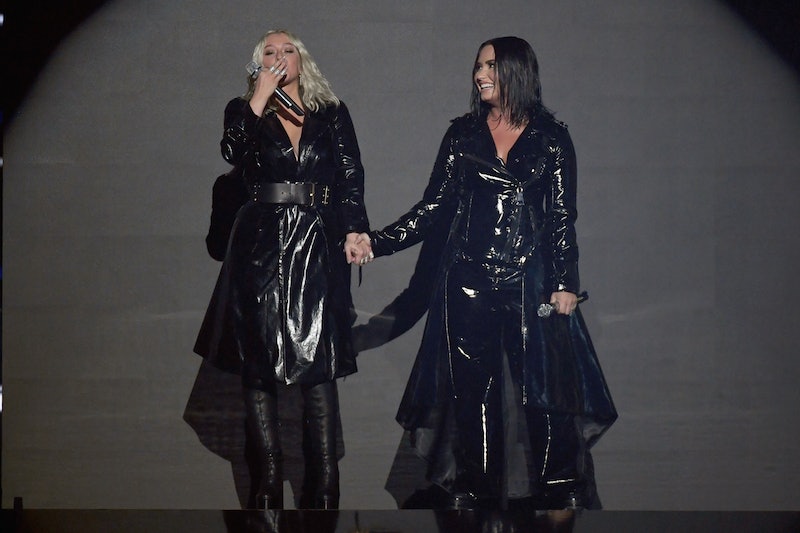 Now this is a "Beautiful" collaboration: Demi Lovato visited Christina Aguilera's Las Vegas residency on opening night to show her fellow singer some serious love. Xtina's appropriately titled, Christina Aguilera: The Xperience kicked off May 31 at Planet Hollywood Resort & Casinos Zappos Theater, and the "Cool for the Summer" singer was in the audience.

Lovato posted her admiration for Aguilera's opening night outing on Instagram Saturday, along with two adorable selfies of the pair. "The f*cking queen herself," Lovato captioned the selfie. "A PERFECT, perfect show.. couldn't believe it was opening night because it was so smooth, flawless and sounded incredible. I was entertained the entire time and was so bummed when it was over until I was reunited with this beauty."

Lovato and Aguilera's mutual musical crushes didn't begin Friday night, however. The two collaborated on the 2018 song "Fall in Line," which they performed at that year's Billboard Music Awards. Lovato even revealed in her 'gram that she had seen Aguilera in concert as a teenager. "I'm so so happy I got to hug you @xtina, haven't seen you in concert since I was 14 and I can't believe how much life has changed since then," Lovato continued her touching caption. "Honored to call you a friend keep it up queen. Oh and EVERYONE should go see #TheXperience at @phvegas!!!"

Aguilera and Lovato have never shied away from wearing their music-loving hearts on their sleeves before. When the duo's single "Fall in Line," featured on Xtina's album Liberation, was nominated for Best Pop Duo/Group Performance at the 2019 Grammys, Lovato expressed her gratitude in a series of tweets.

In the first she wrote, "Woke up filled with hope. Dreams come true y'all... thank you @xtina. I love you so much." Shortly after, the "Sorry Not Sorry" artist tweeted, "I grew up in Texas, singing to @xtina everyday, DESPERATELY trying to hit her high notes.. if you would've told me I'd have a Grammy nod with her I would've laughed in your face!! This is so surreal.." Aguilera retweeted Lovato's first message and wrote, "You deserve it all and getting to work with you was its own award for me @ddlovato. There's no one I'd rather share this with!!"

If the stellar Billboard Music Awards performance, shared Grammy nomination, and Las Vegas selfies weren't enough to prove this pair's friendship, Lovato previously opened up to People about the "Genie in a Bottle" artist's influence on her. In 2017, Lovato credited her new album Tell Me You Love Me to Aguilera's inspiration. "I grew up listening to Christina Aguilera," Lovato revealed to the publication. "She was one of my idols growing up. She still is. Her voice is incredible, and in [Aguliera's 2002 album] Stripped you really got to hear that."

Lovato added, "I think it was her breakout album that really transformed her into the icon that she is today. So that inspired me … she really inspired this album. I was even inspired by the black and white artwork!"

In an industry that can so easily pit female artists against one another, it is an absolute breath of fresh air to see Lovato and Aguilera's friendship and professional respect flourish.