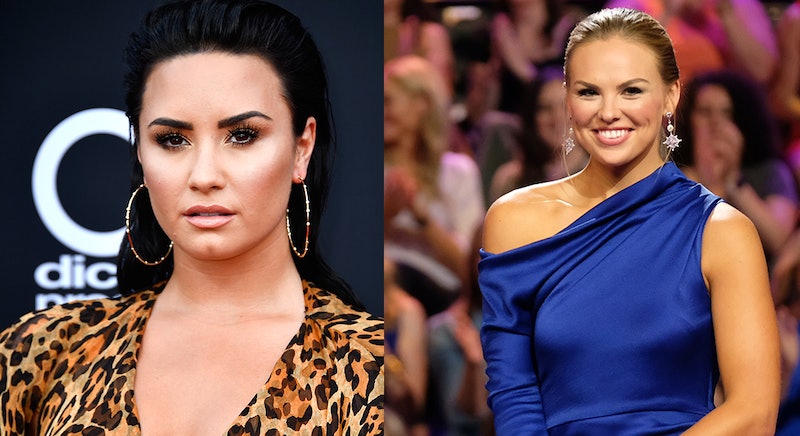 Even though this is the first season of The Bachelorette that Demi Lovato has watched, she couldn't help becoming a super fan right away. She shared her thoughts on Instagram Story almost every week as she watched new episodes. It got even better though. Demi Lovato's Bachelorette fandom came full circle after she met star Hannah Brown during night one of her finale and appeared in the audience during both nights. Demi Lovato even sat next to Demi Burnett from The Bachelor. Iconic.

But, wait, it is even better than that. The two of them snacked on windmill-shaped cookies right after Hannah's second windmill revelation. During the live portion of the first finale episode, Hannah revealed that — in front of his parents — she and Peter Weber actually hooked up four times in the windmill during their fantasy suite date. Thankfully, they couldn't be any more supportive and cheered along with the rest of the crowd.

Lovato was so excited to meet the Bachelorette star that she was the one to post a photo of the two of them together. Along with the photo, the singer wrote, "I interrupt this social media break with this very important and iconic snap shot of WINDMILL cookies with my new favorite person @alabamahannah.. and quess what... Jesus still loves us. Tonight’s the season finale y’all.. make sure to tune in cause it’s gonna get crazy!!"

Even though Hannah has a pretty busy night with Part 2 of her own season's finale airing, she took the time to comment on Lovato's post because, well, she is Demi Lovato, after all. Hannah thanked Lovato for her support and Lovato responded tell her "I got you, girl." Clearly, the fandom is mutual and maybe, just maybe a friendship is forming.

Maybe the pop star will make an appearance on a future season though. She wouldn't be the first celebrity to do so. Jason Biggs was on a group date earlier this season. Ashton Kutcher and Mila Kunis put the guys to the test during Rachel Lindsay's season of The Bachelorette.

Even if Lovato doesn't appear as a guest, she might go on as a contestant on The Bachelor — or at least that's what she said while watching Mike Johnson compete for roses. Once Mike got eliminated and Lovato's mom pointed out that he could be the Bachelor, the singer said that she would sign up to compete on his season if that was the case.

Nevertheless, Mike wasn't the only one that Lovato loved from the season. She couldn't help fanning out over Hannah as she watched the season. Even during the first episode she ever watched, The "Sorry Not Sorry" singer said that Hannah is "SOOOO CUTE!!" And just like that, a Bachelorette fan was born.

The Bachelorette is a show about finding love and progressing a relationship at an accelerated pace, but that is usually something that (usually) just happens on the show. In real life, Lovato couldn't help falling for Hannah's charm right away. And now they're hanging out in real life just a few weeks later. Although Jed got Hannah's final rose, Lovato got to share a windmill cookie with her and watch After The Final Rose live which is so much better.