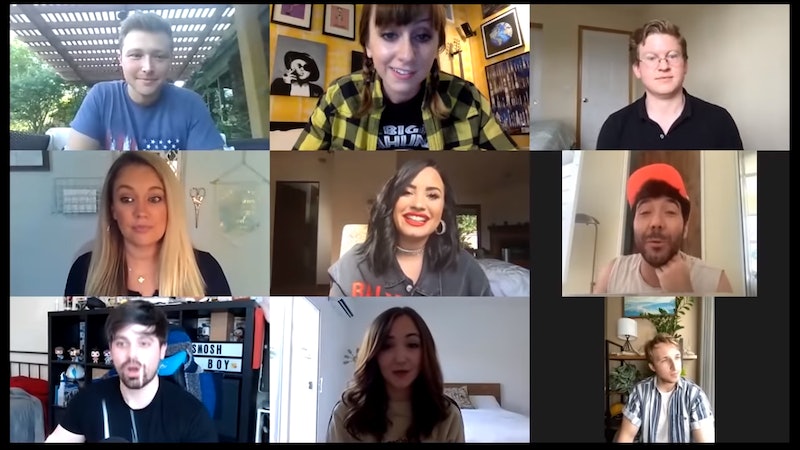 Attention all Disney Channel fans of the late aughts: Demi Lovato reunited with her Sonny With a Chance co-stars in a pre-recorded video shared on April 25. The “Anyone” singer joined Sterling Knight, Tiffany Thornton, Allisyn Ashley Arm, Audrey Whitby, Doug Brochu, Shayne Topp, and Damien Haas to chat about their time on the 2009 comedy series and its Lovato-less spinoff, So Random! In the virtual reunion amid quarantine (which began with Lovato’s lighthearted “I went to rehab! Several times!” quip after Arm asked what everyone has been up to), Lovato opened up about the tolls of being a young actor for the Disney machine.

“I wasn't sleeping and I was so miserable and angry too because I felt like I was being overworked,” she said, before admitting she was surprised that So Random! continued on despite her departure from Sonny. “When I left, you don't expect your show to go on without you, but it did," Lovato said. "But I couldn't have been happier for everybody. I just wasn't in a period of time when I was ready to be on camera again. I could not go back into that environment and there were other things that factored into it."

On top of being sleep deprived and overworked, Lovato also struggled with an eating disorder at the time. While she “had the best time” with the cast, Lovato explained she had no desire to revisit a Sonny With a Chance reboot due to her complicated experience on the show. "I love all of you guys so much, but I went through so much during that show that I would rather just start a whole new project with all of you," Lovato said. "When I think about the show, I miss you guys. And I miss spending time with you and joking and going to Kitchen 24 on our lunch breaks… If we were ever to do anything, I think we should just do a whole new thing."

Sonny followed Lovato’s Sonny, a teen who moves to Los Angeles to join the cast of a sketch comedy series called So Random! Filled with diva co-stars and a rival show called MacKenzie Falls, Sonny ran for two seasons between 2009 and 2011. Lovato’s departure from the series to focus on her mental health culminated in the spinoff and show-within-a-show, So Random!, which ran for one season.

The reunion comes after Disney+ added Sonny With a Chance to its library last month. Per Billboard, the announcement came courtesy of Brochu, who may have willed the reunion into existence. “We definitely need a cast catch-up because I've been hit with so many memories the past few days,” he said. “Self-isolation cast camping trip to find Candy Face?"