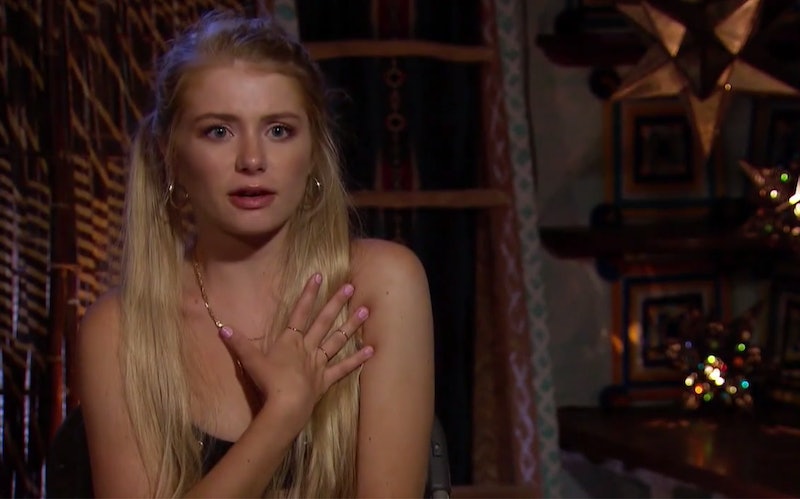 Although the main focus has strayed from them since they became an official couple, Demi and Kristian's relationship on Bachelor in Paradise just returned to the forefront in a very powerful way. When Demi admitted that she isn't as comfortable displaying public affection as Kristian is, it opened up a larger conversation about what it's like to navigate your first gay relationship after coming out. What may have, at surface level, seemed like a simple disagreement about having different love languages was actually about the unique fears LGBTQ+ folk face in queer relationships. No matter how confident Demi had (or hadn't) been showing PDA in the past, this was different: then, she was dating men and conforming to straight, cisgendered norms; now, she's dating a woman in a very public way, bringing up feelings of internalized homophobia and fear of judgment. As Demi said on the show, "It has everything to do with me being comfortable with being gay around people. I'm still holding back because I'm scared."

The struggle began when Demi noticed Kristian being physically affectionate with the other women on the beach. She would touch their shoulders while laughing with them or hug them goodbye. They ended up talking about how they express love differently with Katie, who'd been having a similar issue with Chris: he just wasn't giving her as much affirmation as she wanted. Kristian told Katie that she likes physical touch, but Demi isn't a very touchy person. Demi was visibly annoyed by the comment, and then Nicole arrived with a date card with Demi's name on it.

"I'm irritated," she said. "I don't wanna go on a date right now." In a confessional, she went on to say that she has never liked to show affection in a group setting. But then she began to get emotional and explain how that hesitation has been amplified by the fact that now, she's in a relationship with another woman.

Although those feelings were totally valid and understandable, she still blamed herself for "not giving [Kristian] enough." She felt guilty and feared that it would eventually drive a wedge between them. Not to mention, she felt resentful toward Kristian for what she assumed to be flirtatious behavior, as well as pressure to get on the same page. "I'm getting there," she said. “I wanna give her what she needs, but I’m still uncomfortable with it because I don't want people to be like, 'That's weird.'"

Despite her confusion and hesitation, Demi took Kristian on the date. Kristian could immediately sense that something was wrong, and they sat down for a heart-to-heart. Demi revealed her observations and fears, and that she was frustrated by Kristian's affection toward others. Kristian assured her that those interactions were in no way romantic or sexual — it's simply how she shows care for people she loves.

"I just don’t like PDA," Demi said. "It's just something that I don't like.” She also mentioned that she didn't grow up around the display of much physical touch, which contributed to her discomfort. But it was clear t wasn't just about PDA: it was about the anxiety of being with someone of the same gender on national television, and the potential judgment that comes with that.

Some viewers misunderstood Demi's reasoning because of her previous interaction with men in the franchise (for example, her hot tub make out session with Derek). But what they're failing to take into account that a same-gender relationship makes the situation — and the feelings — entirely different. Her romance with men on the show is normalized and therefore largely accepted by society. With women, unfortunately, it's not, which is why it's so important for couples like Demi and Kristian to have a platform. And Paradise provided that.