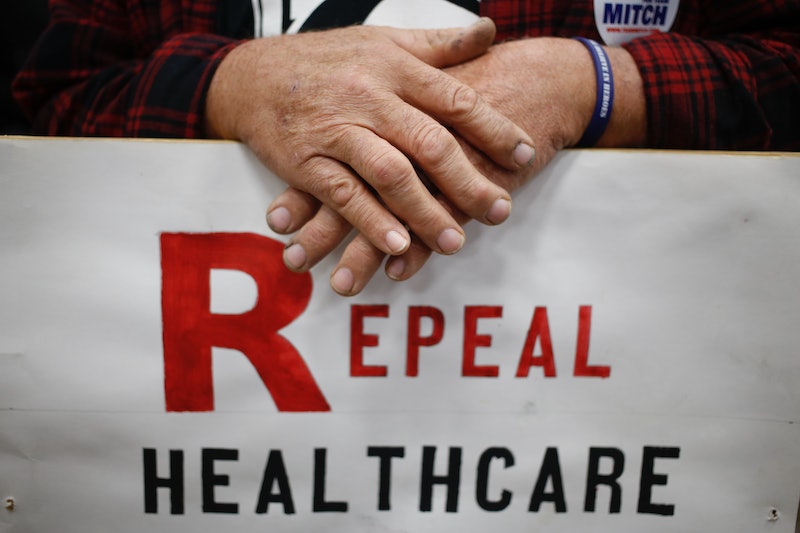 Over the last few months, strategy after strategy deployed by the Republican Party to make good on their seven-year promise to do away with President Obama's signature health care legislation has crumbled. Even with full control of Congress and the presidency, the GOP cannot seem to come up with a health care bill that satisfies the needed number of legislators, much less the public. So on Monday night, when the idea was floated that Congress should simply repeal Obamacare and then worry about figuring out a replacement plan at a later date, people understandably went nuts.

Not only is that obviously not what Democrats want, but it's also not what Republicans or even President Trump promised on the campaign trail. Even people who were initially reluctant to support the Affordable Care Act now understand how much worse off their lives will be without some form of government-regulated health care system in place. Without any laws in place, the most vulnerable populations of Americans are at the mercy of health insurance providers. Medical costs for those with preexisting conditions, and even women who are pregnant, would skyrocket.

But in a stroke of satirical genius, some took to Twitter to use Republicans' own catchphrase against them. People are using the hashtag #RepealObamacare to shine a light on the absolute hypocrisy and nonsense of doing away with a system that helps people, just because Congress can't decide on the right way to do it.

Nick Jack Pappas, who describes himself in his Twitter bio as a comedy writer, seems to have started the tongue-in-cheek use of the #RepealObamacare hashtag with this wisecrack.

Another analogy for why repealing the Affordable Care Act outright makes no sense. You can't figure out the best way to help people, so just harm them instead... yea'ok.

That'll teach them to demand basic inalienable rights and a better quality of life!

Jesus was only in it for the money

That whole "do unto others thing," doesn't extend to government officials, I guess.

Hmm, might be on to something here. Maybe the Democrats can use this "repeal and no replace" tactic to their advantage.

While at the moment the "just repeal now and worry about replacing later" plan seems to be dead in the water, we can't sleep on this issue. Republicans who want Obamacare repealed are up in arms that their lawmakers can't get it done, and Democrats are clinging to the legislation to save it. It's clear that this is long from being decided, but at least we can have a humorous moment between the Republicans' continuous roll out of worrying, subpar plans.