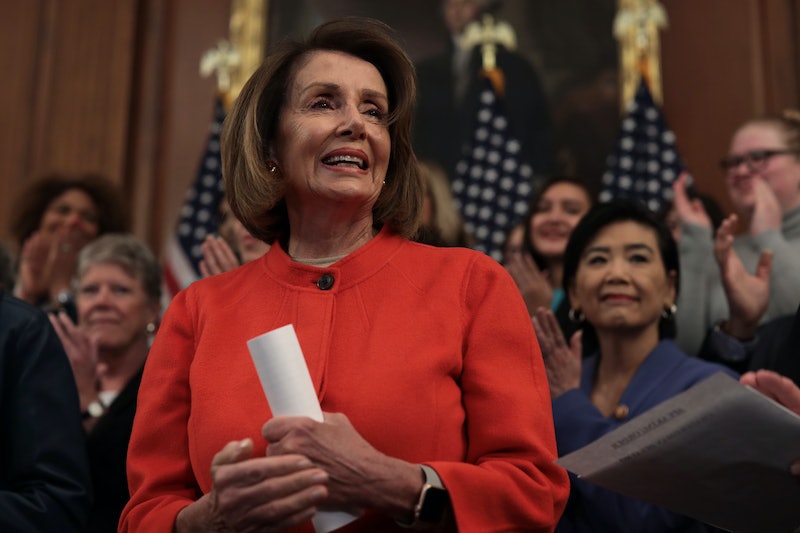 House Democrats claimed victory Friday after passing a sweeping electoral reform bill that seeks to get money out of politics and expand voter rights, among other things. The bill H.R.1, or the "For The People Act," as Democrats call it, passed the House in a 234-193 vote. However, with little to no Republican support, the bill's future remains in question.

Among its many provisions, the bill aims to make Election Day a federal holiday and expand automatic voter registration in an effort to increase access to the polls. It also calls for serious reforms to current ethics and campaign-finance laws. And in a provision likely to be a direct response to President Donald Trump's 2016 campaign decisions, the bill would requiring all presidential and vice presidential candidates disclose at least 10 years of tax returns to the American public.

House Democrats have hailed the bill as an attempt to return transparency to elections and break down barriers around the ballot box, Politico reported. "HR 1 restores the people's faith that government works for the public interest, the people’s interest, not the special interest," Vox reported House Speaker Nancy Pelosi said Friday. "It is fundamental to our democracy that people believe that actions taken here will be in their interest. That is what this legislation will help to restore."

Other House Democrats hailed the bill as an opportunity to affirm voter rights. "This vote is an opportunity to be on the right side of history. If not us, then who?" Politico reported Rep. John Lewis said in a speech on the House floor. "If not now, then when? The time has arrived to tear down the barrier to the ballot box."

But the future of the bill remains in question thanks to fierce opposition in both the White House and the Republican-controlled Senate. Majority Leader Mitch McConnell has already vowed to keep the legislation from coming up for a vote in the Senate. Earlier in the week, the Hill reported that McConnell referred to H.R.1 as a "622-page doorstop," adding "I certainly don't plan to even bring it to the floor here in the Senate."

Even if the bill somehow did manage to get past the Republican-controlled Senate, it appears to have no support from the White House. In a policy statement issued earlier this week, the White House noted that President Trump would be advised to veto the bill should it ever land on his desk.

Some aspects of House Democrats' electoral reform bill raised some outside concerns as well. The American Civil Liberties Union (ACLU) has also opposes H.R. 1, saying that though it strongly supports some aspects of the bill, there were certain provisions that it said "unconstitutionally impinge on the free speech rights of American citizens and public interest organizations," according to its letter to the House Rules Committee.

According to Politico, House Democrats are planning to put some of H.R.1's provisions into smaller, separate pieces of legislation in an effort to see at least some of the perhaps more widely supported reforms pushed through the Senate. It was unclear, however, exactly which provisions might get pulled out and reframed.