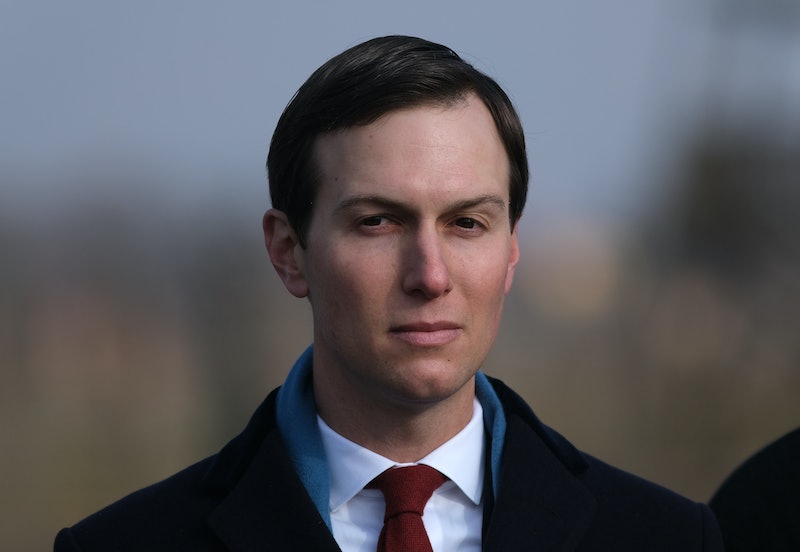 It appears that an investigation into security clearance records for the Trump administration isn't going to take place without a fight. Last week, the House Oversight & Reform Committee reiterated that Democratic members want Jared Kushner's security clearance documents, but a lawyer for the White House said on Tuesday that they have no intention of obliging, per Politico. What's more, he argued that the request by the committee is "overly intrusive" and "not consistent with applicable law," according to the publication.

In January, the committee first announced an investigation into the security clearance process at the White House. Then, last week, The New York Times released a report that POTUS had allegedly ordered then-Chief of Staff John Kelly to approve Kushner's clearance last year, despite several supposed red flags. Trump denied any involvement in any security clearance process in a January interview with The New York Times.

On March 1, Committee Chairman Elijah Cummings wrote a letter to White House Counsel Pat Cipollone, following up on the January investigation with a renewed request for documents and scheduled interviews. Cummings wrote,

Since I [announced the investigation on Jan. 23], the White House has stalled, equivocated, and failed to produce a single document or witness to the Committee...these new reports raise grave questions about what derogatory information career officials obtained about Mr. Kushner to recommend denying him access to our nation's most sensitive secrets, why President Trump concealed his role in overruling that recommendation...and why your office is continuing to withhold key documents and witnesses from this committee.

Now, the White House is hitting back.

On Monday evening, Cipollone said in a letter to Cummings that he would brief the committee with general information about how the administration goes through the security clearance process, but wouldn't hand over anything specific to Kushner. Via Politico, Cipollone wrote,

These actions suggest that the Committee is not interested in proper oversight, but rather seeks information that it knows cannot be provided consistent with applicable law. We will not concede the Executive's constitutional prerogatives or allow the Committee to jeopardize the individual privacy rights of current and former Executive Branch employees.

Cummings issued a statement of response to Cipollone on Tuesday afternoon, writing,

There is a key difference between a president who exercises his authority under the Constitution and a president who overrules career experts and his top advisors to benefit his family members and then conceals his actions from the American people. The White House’s argument defies the Constitutional separation of powers, decades of precedent before this Committee, and just plain common-sense.

Cummings concluded, "The White House security clearance system is broken, and it needs both congressional oversight and legislative reform. I will be consulting with Members of the Committee to determine our next steps."

The back and forth between Cipollone and Cummings on Tuesday came a few hours before the latest report on White House security clearances: on Tuesday evening, CNN reported that Trump allegedly pressured Kelly to give his daughter, Ivanka Trump, a security clearance as well. Bustle has reached out to the White House for comment. The new report directly contradicts a claim Ivanka made three weeks ago in an ABC News interview, in which she maintained her father had "no involvement" in her or her husband's security clearance processes.