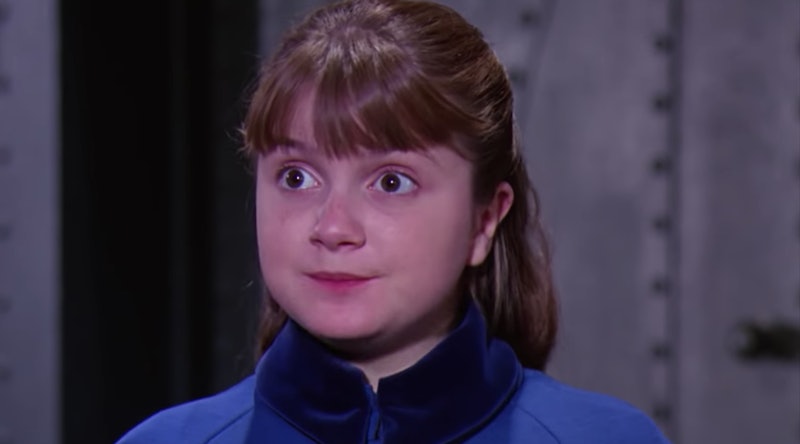 Here is some sad news for Willy Wonka & the Chocolate Factory fans. Denise Nickerson from Willy Wonka died at the age of 62 on July 10, Variety reported on Wednesday. Nickerson, of course, was known for playing Violet Beauregarde, the young teen who loved chewing gum and then literally turned into a giant blueberry. She will forever be remembered for the 1971 role that she played perfectly.

Reports of Nickerson's death first surfaced after a family Facebook page titled "Support For Jazzy and Josh Nickerson" (Josh is Nickerson's son and Jasmine is his wife) posted a brief message reading, "She's gone." Prior to that, the family sadly shared on July 10, "They just took off all the equipment. None of it was helping, but making her only more uncomfortable. We're telling her it's okay to let go."

The family first shared about Nickerson's hospitalization in a July 9 Facebook post. They wrote, "So as a public update, Denise had a major medical emergency yesterday morning. We spent all day in the ER and she was finally moved into the ICU last night. She's had seizures this morning and is in pulmonary and respiratory distress." The update continued, "The doctors have found that she aspirated and has developed pneumonia. They have upped her oxygen. She's under a DNR order so they aren't putting her on a ventilator or feeding tube and right now we just have to wait for updates."

Josh and Jasmine also set up a GoFundMe page to help them raise money for their family, especially after "Jasmine quit her job to stay at home" with Nickerson and Josh started working a second job. The couple are also expecting their first child at the end of August. They explained further that Nickerson "suffered a severe stroke" last year and it "caused extreme damage." They shared, "We cannot afford to pay for death expenses. Although she had the fame and notoriety, there is no inheritance. No life insurance. No end of life nest egg. Just our income which isn't even enough."

Overall, it definitely sounds like a sad situation, but both Josh and Jasmine are extremely grateful for the love and support from everyone. Jasmine shared on Facebook on July 11,

"We are so overwhelmed with the outpouring of love and support we're receiving. We have been up almost all night again and finally slept a few hours from about 4:30 last night til about 7:30 this morning. We're exhausted physically, mentally, emotionally. We thank you all and are trying to sort through the thousands of messages on like every platform. Please be patient with us, as it's hard to look at so much so quickly but we will get there. It's hard to wake up and re-realize she's gone but trending around the world."

Nickerson is being honored by many on social media, including by her former Willy Wonka costar Julie Dawn Cole, who played Veruca Salt. Cole tweeted on July 11, "So very sorry to say that my dear friend and Wonka sister, Denise Nickerson, has gone."

Fans are also remembering Nickerson across Twitter. Here are just a few of the many tweets:

She Impacted So Many Childhoods

She left quite the mark.

She Continues To Shine

Her talent will never be forgotten.

She Made Others Laugh

She lifted many spirits.

In addition to Willy Wonka, Nickerson starred in several other famous projects, including Dark Shadows, The Electric Company, and an episode of The Brady Bunch. Nickerson will forever be in fans' memories, especially every time they watch her as Violet Beauregarde.

More like this
12 Years Ago, Austin Butler Manifested His Oscar Nom In This Disney Movie Scene
By Jake Viswanath
Sandra Bullock’s Razzies Speech Proves She’s The Ultimate Miss Congeniality
By Sam Ramsden
Anne Hathaway Shared A "Thrilling" 'Princess Diaries 3' Update
By Darshita Goyal
Cruz Beckham Teased New Music With An Adorable Nod To Mom Victoria Beckham
By Stephanie Topacio Long
Get Even More From Bustle — Sign Up For The Newsletter
From hair trends to relationship advice, our daily newsletter has everything you need to sound like a person who’s on TikTok, even if you aren’t.