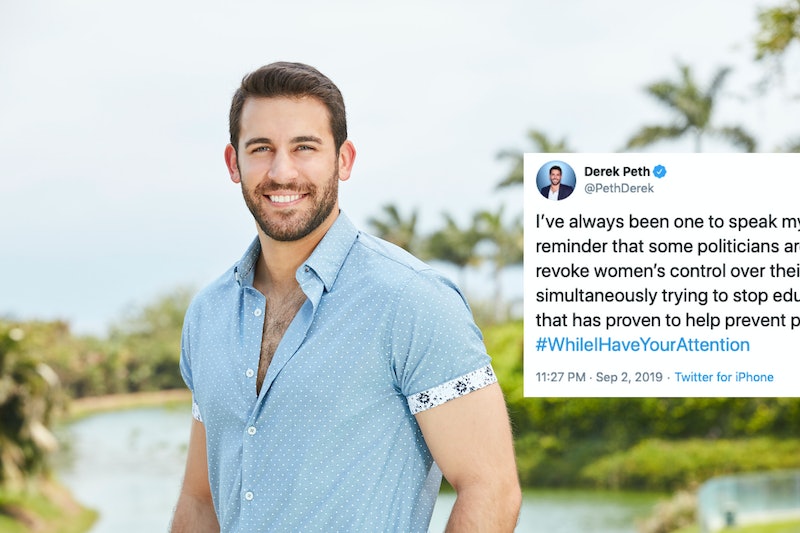 Fans have gotten to know Derek Peth on two seasons of Bachelor in Paradise and The Bachelorette, and now, he's using his following for good. After he sent himself home on BiP during Monday night's episode, Derek shared political tweets about women's reproductive rights and gun control while he had fans' attention. And although Derek's been openly sticking up for the women on his season on Twitter, it's refreshing to see him continue to use his platform to share important messages.

The latest episode of BiP wasn't a good one for Derek. After Demi ended things with him earlier this season when she realized her feelings were stronger for her girlfriend, Kristian, Derek felt a real connection with Tayshia, who decided to pursue things with John Paul Jones instead. That led to Derek deciding to bow out of the season, and it was heartbreaking to see him go, talking about how he wondered if he'd ever be able to find the love he was looking for.

But despite how hard that must have been for him, Derek's spinning the situation positively, tweeting about social issues he feels passionately about. "I’ve always been one to speak my mind so ... just a reminder that some politicians are still trying to both revoke women’s control over their body while simultaneously trying to stop education in public schools that has proven to help prevent pregnancy," Derek wrote, adding the hashtag #WhileIHaveYourAttention.

With all the anti-abortion laws being passed in 2019, Derek's tweet couldn't have come at a more important time, and his followers seemed to truly appreciate it — including Bach franchise alums Ashley Spivey and Nicole Lopez-Alvar (who also happens to be Derek's BiP castmate).

But Derek didn't stop there. He also added another tweet about how the United States government needs to take more action against ongoing gun violence, since it continues to cause of so many tragedies in the country.

"Another reminder that our citizens are dying from random gun deaths while other first world countries have fixed this issue and (part of) our government refuses to do anything about it," he tweeted. "We can do better."

These tweets came after Derek defended Tayshia in a separate tweet where he asked fans not to attack her just because she didn't return his feelings and decided to further her relationship with John Paul Jones instead.

Good for Derek for speaking his mind on such important topics. It's imperative that the conversation against things that actively endanger people's lives, like gun violence and anti-choice laws, continues, and with the reach that Derek has through his appearances on the Bachelor franchise and social media, he's definitely contributing something positive.

And after getting to know Derek better on the show, it's probably safe to say that he will definitely find the right person for him, even if it didn't happen quite how he expected. He has so much to offer — including his ability to stand up for what he believes in.