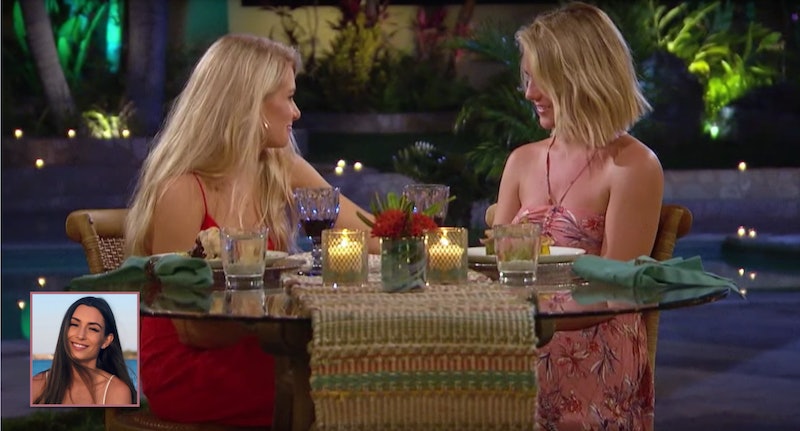 After competing for Nick Viall's heart on Season 21 of The Bachelor, Astrid Loch ultimately found love on Bachelor in Paradise Season 5 with Kevin Wendt. She knows first hand what it's like to weather emotional ups and downs of Paradise, and she's dishing all to Bustle. Read what she has to say about Demi and Kristian making it Paradise official, Katie and Chris' misunderstanding, and more in this week's recap.

“For both of [Demi & Kristian] to let love be what overweighs any judgment or any expectations, that’s true love.” — Hannah G.

Can you believe we’re already halfway through Paradise? This season seems to be filled with more drama than ever, and this week has left me with more questions than answers. What’s a friendship rose? Why are we still fighting over Blake when we have Mike? And when did Dean become the voice of reason?

But let’s start at the beginning.

Monday’s episode picks up with Jordan and Christian getting into a rather violent altercation that ultimately sent both of them home prior to the rose ceremony. It was hard to tell who exactly threw the first punch, but once Jordan body slammed Christian everything quickly went downhill. I can’t even imagine how scary the whole thing must have been for Nicole and the rest of the cast, and I applaud production for their zero tolerance policy for violence on set. Did you guys notice how many of the staff quickly rushed in to break up the fight? As viewers, we often forget just how many people it takes to make this show because we never actually get to see the people on the other side of the lens — but trust me, they’re the real stars.

After Chris Harrison diffuses the situation, and after a little more of the Blake-Hannah-Dylan triangle unfolds, we finally head into the Rose Ceremony, which starts off with Onyeka eliminating herself. Hannah finally chooses Dylan over Blake and America can go to sleep knowing everything will be okay. But every time someone makes a smart decision… there’s someone else out there making a questionable one. Now, it’s hard to truly know where Kristina was coming from when she gave Blake the rose. Was it a friendship rose? Are there feelings left? Does she want him to find love? Or does she want to watch him suffer in his “own personal hell”? If I had to take a guess I’d say it’s a combination of all four. Ultimately though, it’s HER decision, and nobody should be judging her for it — especially when she had zero connection with Cam, Wills, or Kevin, who are all now on the next flight home.

It’s a new week in Paradise, and with that we get to meet Caitlin from Colton’s season (as an honorary Canadian, I should mention she’s one of us). As someone who’s been through this experience, there truly is nothing more intimidating than seeing a CLEAN girl walk down the stairs. Caitlin ultimately decides to take Blake on the date and… they also met at Stagecoach? *makes mental note to never let Kevin go to Stagecoach without me* My favorite part of this date was Blake trying to break down his Paradise experience thus far and Caitlin accepting it as if he was telling her about his favorite food.

Back on the beach, after a talk with her BFF Hannah B., Demi sits down with Derek and opens up to him about how she still has feelings for the girl she was dating back home. As much as I’ve enjoyed the snarky and outspoken Demi on Colton’s season and in earlier episodes of Paradise, I have to say that I love this honest, raw, and vulnerable version of Demi so much more. And of course I have to give total props to Derek for how he handles hearing that Demi has downplayed her feelings for someone else. If all men were as empathetic and understanding as Derek, this show probably wouldn’t exist. More on these two later.

Tuesday’s episode kicks off with Demi confiding in the fairy godfather also known as Chris Harrison about her situation back home with Kristian. Although Demi doesn’t find all of the answers she’s looking for, she does get Chris Harrison's support and an “I love you,” which is the ultimate stamp of approval.

But as always, all good things must come to an end, and the mood of the show quickly shifts as the focus turns back to another love-friendship-triangle between Kristina, Blake, and Caitlin. Now, this is the part of the show where Kristina lost me a bit. She gave Blake a rose in order for him to potentially find a connection with someone else, yet when he goes on a date he seemingly enjoyed with Caitlin, she tries to make him question that connection. Remember earlier when I asked the question of whether there were still feelings there between these two? I personally think there might be, or maybe she just wants to stay for another week.

All this of course doesn’t sit well with Caitlin, who’s been fired up by some of the other girls on the beach. The conversation that started with an innocent sounding “Hey girlie” quickly takes a wrong turn. I definitely think Kristina overreacted with her tone and overall condescending responses, but I’d bet money that she knew Caitlin wasn’t coming from a good place. I don’t think you get to accuse someone of not respecting women when minutes earlier you called that same person a bitch. At the end of the day, I think they could have both handled themselves better and I’d be curious to know how they’re both reflecting on this conversation now that they’ve gotten to watch it back.

(Side note: Nicole is a total mood watching Clay work out on the beach while eating fish tacos.)

You know what isn’t a mood? Seeing Katie self-sabotage a perfectly good relationship because of her own insecurities. Watching her tell Chris it was okay for him to go on another date reminded me a lot of my time in Paradise when Kevin implied that I should consider going on other dates. He too at the time was trying to self-sabotage the relationship and made that statement in order to get reassurance from me about my commitment and how I felt. Unfortunately for Katie, things didn’t go as smoothly, as Chris takes this opportunity to go on a date with new arrival Jen Saviano, who by the way is drop dead gorgeous.

I have to believe there was a greater power looking out for Katie that ensured Chris wasn’t having a good time. (Fun fact: if you’re suffering from sea sickness, make sure you stare at the horizon line, since its the only thing that doesn’t move). I really like Chis and Katie together, as they remind me of Kevin and myself. Hopefully by next week they can find their way back to each other and continue their relationship stronger than before.

Now let’s get back to Derek and Demi (and Kristian). I know Demi has gotten some flack about coming to Paradise with a girlfriend back home but let’s be real: She’s 24, she was always up front with Kristian, and she shouldn’t be crucified for needing time to figure out her feelings. Anyone who is choosing to bash her at this point is completely missing the point of this storyline. I admire Kristian because it takes a lot of confidence to let someone go on a dating show to figure out their feelings. Sometimes you don’t know that you’ve got a good thing until it’s gone, and Demi figured out that exactly while in Paradise, and isn’t that what this show is all about?

I do feel for Derek in this situation, though. There’s nothing worse than hearing, "You’re perfect, but I'm choosing someone else." As always, he handles this whole thing maturely and with such understanding that I almost felt I was watching another show. I'm pretty sure he feels a little better today after reading the many DMs he must have received after last night.

Overall I was blown away with how ABC handled this whole topic, and I'm so happy we finally get to see a same-sex relationship on a mainstream American reality TV dating show. Should Demi and Kristian get to stay or should they be leaving the beach and continue their relationship in the real world? Personally, I can’t wait to see more of them and think they deserve to have a few more weeks of a free vacation before having to return to the real world and deal with everyone else’s opinions. After all, we're not telling Hannah and Dylan to leave the beach now that they’ve made it official.

That’s all for this week!