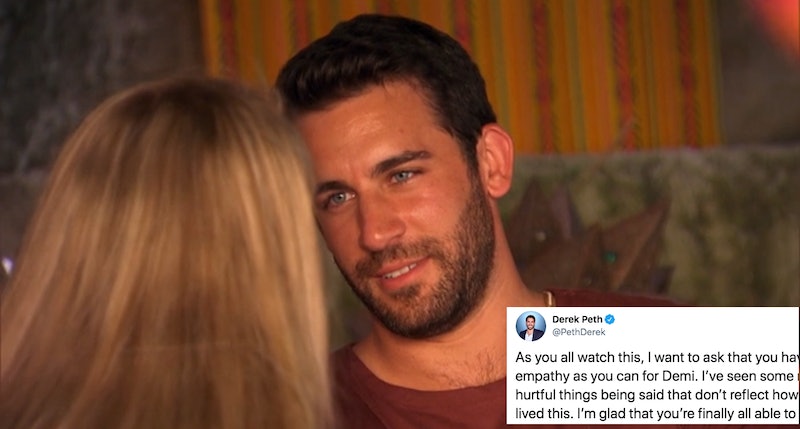 With her outgoing personality, Demi of Bachelor Nation doesn't shy away from attention. But not all attention is good, and the other half of her Bachelor in Paradise couple is taking to social media to defend her. Derek's tweet about Demi on Bachelor in Paradise following the Aug. 19 episode calls for viewers to be compassionate toward her in light of the news of her complicated feelings for someone back home.

Demi has been transparent about her conflicted emotions on Bachelor in Paradise since she admitted she has feelings for a woman back home while she pursued Derek. The Week 3 episode ended with Demi seemingly asking Chris Harrison to bring her non-Bachelor Nation love interest to Paradise to help her navigate these emotions. And while you might think that would upset Derek, his tweets indicate he isn't mad about any of Demi's actions — and he doesn't think fans should be either.

"As you all watch this, I want to ask that you have as much empathy as you can for Demi. I've seen some really hurtful things being said that don't reflect how I feel and I lived this," Derek wrote on Monday, after the episode aired on the east coast. "I'm glad that you're finally all able to see how open and honest she's always been with me," he added. In a follow-up tweet, the BiP star added that he wasn't mad at Demi for coming to Paradise with a little bit of baggage. "I think it's unfair to assume we should all be clean slates bent on getting engaged because we're on a show," he said. "This is our lives and we're all just people seeking meaningful connections. That's what Demi and I are both doing and it should be respected."

Demi had already been experiencing hate on the internet due to her sexuality. But there's been a new wave of backlash that's being justified by the fact that Demi had been seeing someone before coming on the show. Tanner Tolbert, who met his wife Jade on Bachelor in Paradise, compared Demi to Jed Wyatt from The Bachelorette in a since-deleted tweeted. And the comparison, while echoed by some BiP watchers, did not go over well with the former Bachelorette. Hannah herself called out Tanner's comment on Twitter, writing, "one is my best friend, one is my ex-fiancé....I can tell you first hand, not the same."

In fact, there's not really any reason to compare Jed to Demi. Demi has been completely upfront with her relationship status. She said in the first episode that she had been seeing a woman back home, but wanted to go on the show to explore her options. And while she spoke with some of her female friends about her romantic quandary before talking to Derek, she showed him respect by letting him know fairly quickly where they stood. Then, there's the added layer of having to open up about her LGBTQ identity publicly, which Demi said she didn't really want to put a label on. As Derek wrote on Monday, Demi was always "open and honest" with him. So, really, Demi and Jed couldn't be more different.

To Derek's point, he is the one who actually lived through this. So if he and Demi are on good terms (which their Twitter interactions suggest they are), there's no reason people not involved should be angry on his behalf. Instead, look at this pair as an example of what a relationship should contain — honest and respectful communication. Because no matter if Demi chooses to be with Derek, or the woman she was seeing back home, or neither of them, the way she is expressing her emotions is exactly how it should be done and no one understands that better than Derek.