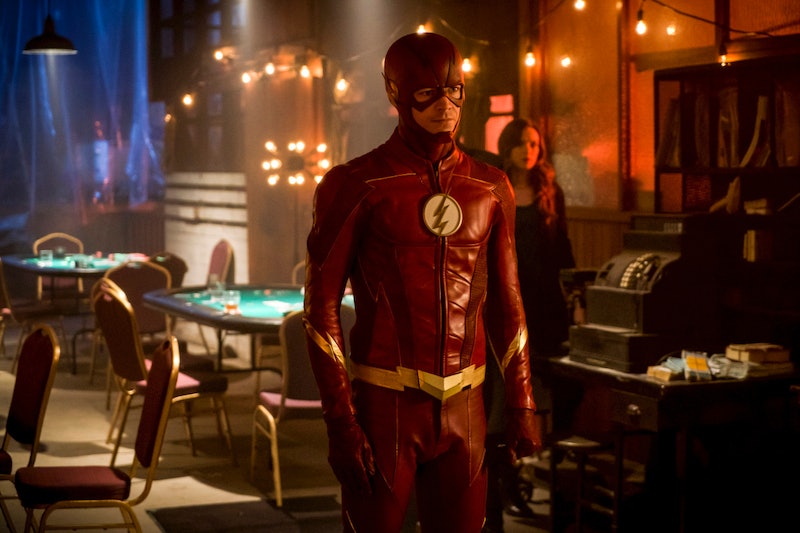 Spoilers for The Flash episode "Harry And The Harrisons." Ever since DeVoe declared war with Barry, Team Flash has been stuck playing catch up. It's hard to get ahead of The Flash villain The Thinker, when said villain uses a dark matter thinking cap and can absorb the powers of metahumans, but now it looks like Barry might just have the upper hand. Not only does the Team know the basics of the Thinker's goal, DeVoe's plan for The Enlightenment on The Flash didn't count on Iris publishing an article on him, and now he has all of Central City on his tail.

Team Flash finally has something they haven't had, well, since the beginning of the Season: an idea of DeVoe's master plan. After seeing him rob several tech facilities in last week's episode, Barry, Caitlin, Cisco, Harry, and Iris have figured out that he plans on sending a handful of satellites into space, and emitting a signal (one assumes using Dark Matter) that would erase every human's intelligence, essentially removing any technological intelligence from human kind and leaving without any technological advances (which he believes are the root of all evil). So, Team Flash knows DeVoe's plan, what they don't know is how to stop it, and that's where Caitlin steps in. In "Harry And The Harrisons," Caitlin calls on Amunet Black, hoping to recruit her to use her metal powers to shoot down the satellites. But she also has an ulterior motive: she wants Amunet to help her get Killer Frost back.

In the end, Caitlin's secret motive doesn't really matter. Amunet admits that what she did to help Caitlin keep Killer Frost at bay last year was really a placebo effect. Whatever's keeping Killer Frost out of sight now is a mental block only Caitlin can push past. Not only is Amunet unable to help Caitlin, she doesn't stick around to help the team defeat DeVoe either. After getting all of Team Flash to help her steal back her precious metals, Amunet leaves Barry and Caitlin in the dust. She does, however, give them one parting gift: a grenade of shards. Used correctly, they have the power to destroy a satellite or to defeat DeVoe, both physically (knock him out) and mentally (he can't use his powers on them) — the exact plan is, like everything else, still a little hazy. But that's not the only advantage Team Flash has to beat the Thinker once and for all.

Harry and Iris have both found DeVoe's only weaknesses: his wife Marlize and his secrecy. By using his emotional intelligence instead of his fast dissolving knowledge, Harry figures out that the reason DeVoe is so quiet right now is because he doesn't have the one thing that motivates him: his wife. And, while Team Flash is on the hunt for Marlize, Iris has another trick up her sleeve. The only reason DeVoe has been able to get away with his evil plans is because nobody knows he's a villain, and in this episode, Iris changes that for good.

After convincing Barry that Central City citizens would be an asset in this fight, not another obstacle, Iris publishes an article exposing DeVoe and his plan to the world. And almost immediately, she begins to receive tips from readers, telling them where they spotted DeVoe last and what they think he's up to. DeVoe still has the power to move between pocket dimensions, but this still gives Team Flash a huge upper hand. At the very least, it multiplies their allies and takes away any credibility DeVoe has with the public. Perhaps it will be enough to get Barry's job back at CCPD. DeVoe's plan is smart, but armed with the knowledge that Marlize has left him and with the eyes of Central City, Team Flash might have finally thrown DeVoe for a loop.