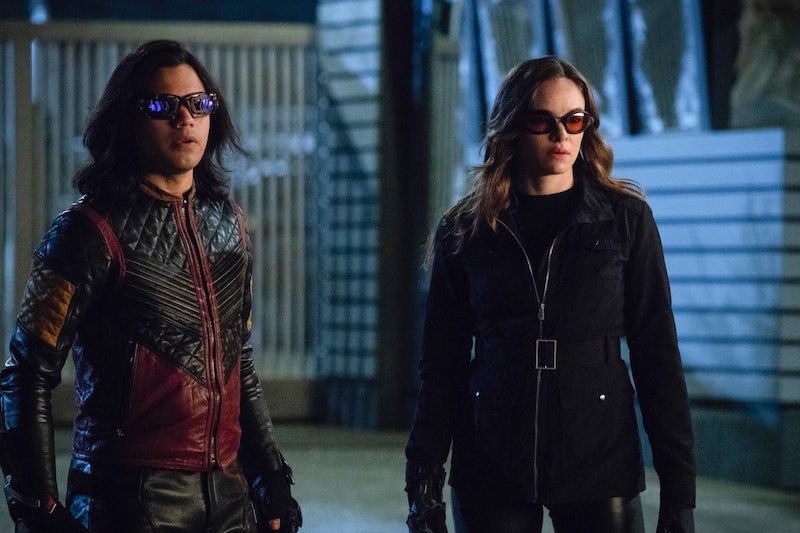 Out of all of the character deaths that have hit The Flash Season 4, maybe the most surprising loss has been the disappearance of Killer Frost. DeVoe used one of the abilities he's stolen to change Caitlin's DNA, essentially killing off her alter-ego. Caitlin was finally starting to come to terms with Frost, and even getting to know her a little better. And Killer Frost, in turn, was embracing her more positive, heroic side. Is Killer Frost really gone on The Flash, or will she return — perhaps just in time to vanquish DeVoe?

Team Flash has had bad luck when they've tred to force a member of the crew to gain or regain powers — just think back to all those times when Wally attempted to become a speedster. After facing off with the Thinker, Caitlin left with her life. But she was disappointed to find that she no longer had her once-evil alter ego. Usually, Frost is activated by a blast of adrenaline to Caitlin's system, but she's been nowhere to be found, even after subsequent showdowns with major bad guys.

Normally, Caitlin and Cisco would be heading to their lab in order to find a scientific solution to the issue. And while the resident brainiacs are as savvy as ever, they're hesitant after Wells' overuse of his Thinking Cap left him barely able to string two long and jargon-heavy sentences together. So far, science has gotten them nowhere when it comes to resurrecting Killer Frost. However, they did make one fascinating discovery: Caitlin realized that her cells were still the same, meaning that unlike some of the other victims of DeVoe, she still has her powers, and Killer Frost wasn't absorbed by the evil mastermind, who taunted Caitlin for not being able to access her.

Caitlin will also come face to face with Amunet again in May 8 episode "Harry and and Harrisons." Amunet once kidnapped and forced Killer Frost to work for her, so perhaps the memories triggered by seeing this character again could help reactivate Caitlin's powers or bring back Frost. On the other hand, studying Amunet's immunity from DeVoe could also help Cisco and Caitlin put together a cure. According to actor Danielle Panabaker in an interview with Entertainment Weekly, her character Caitlin is deeply affected by Killer Frost's disappearance, so her emotional state could be key to her possible reappearance. "There’s still so much to learn about Killer Frost and Caitlin, and just as we’re starting to scratch the surface, Killer Frost gets taken away from her," Panabaker said.

And according to the actor, it's Joe's skills as a detective that will provide the most guidance. "[Joe] says sometimes you have to look in a different direction," Panabaker told the outlet. Maybe this means getting help from the villainous Amunet or doing an experiment that seems unconventional, even for Team Flash. But Panabaker hinted that this advice "prompts Caitlin to look in a different direction not only for herself in trying to find answers to Killer Frost — why she went away, and if she can get her back — but also in the larger context of Team Flash and getting the help they need."

And whether it's through scientific research or some other means, Caitlin could potentially figure out how to use her own powers again, rather than relying on Killer Frost to wield them. Perhaps the two personalities will even integrate, so that Caitlin has control over when she wants Frost to emerge, rather than just when she's experiencing fear or distress. So it's possible that Caitlin Snow could regain her icy abilities and quicker healing without the full return of Killer Frost — but until Team Flash manages to defeat the Thinker and permanently stop DeVoe, it's hard to imagine that fans have already seen the last of her.