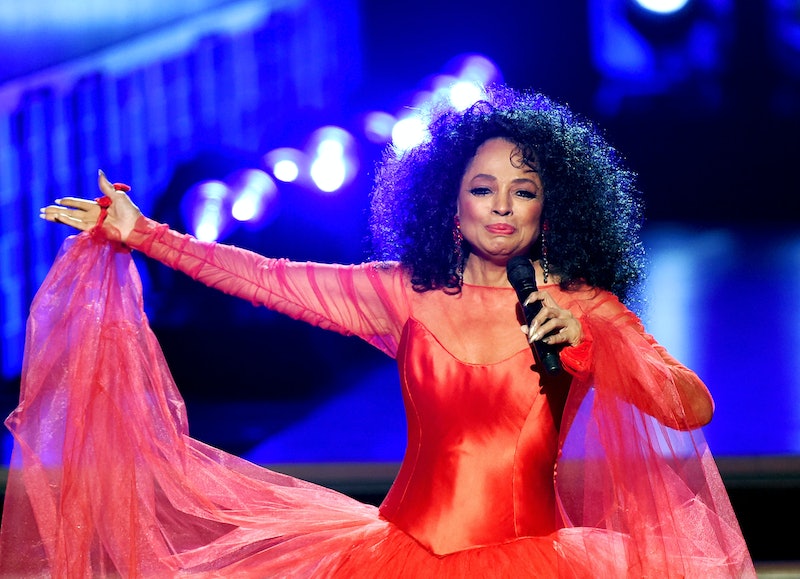 Listen, the world can be a rough place to live in sometimes, especially these days. But if there's one upside to existing on this planet right now, at this very minute, it's that you're alive and well enough to witness Diana Ross' 2019 Grammy performance — and her entire family cheering her on for it. After a short introduction and look back on her career on Sunday night, Ross' grandson Raif came out and introduced her, looking as cute as ever.

Fans might remember that the little guy (just don't call him that) also took the stage at the 2017 AMAs with his grandma, breaking out all the dance moves and essentially stealing the show. Raif, the 8-year-old son of Rhonda Ross, didn't stay on the dais this time, instead walking backstage to join his family. Meanwhile, Ross took the stage wearing a red ball gown and said that she took to performing as a young girl because it made her happy.

"It brings me joy, through my life there has always been music and its power," she said, before launching into the "Best Days Of My Life." The camera panned to the crowd where her daughter Tracee Ellis Ross and family were sitting, dancing, singing along, and snapping pictures. Celeb families, just like us, huh?

Ross finished "Best Days Of My Life" and then sang "Reach Out And Touch (Somebody's Hand)," walking into the audience and greeting people as she sang, like the legend that she is.

As she closed out her performance, she thanked the crowd, telling them to raise their hands and "not be lazy," and even adding, "Happy Birthday to me!" (Ross' 75th birthday is March 26, but we are all now officially celebrating it until then, and for as long as she asks us to celebrate afterwards.)

On Twitter, fans were taking it all in and loving the moment.

Oddly, though, Ross has not received a whole lot of love from the Recording Academy throughout her storied career. According to the official Grammys website, Ross had 12 number-one hits with the Supremes, including "Stop! In The Name Of Love." You'd think that single, or any of the others would have earned a nod from the Academy in its day, but alas, the performer didn't receive a nomination until her solo album Ain't No Mountain High Enough. Her first Grammys nom was in 1971 for Best Pop Vocal Performance for the title track of that album.

She was also nominated in 1974 in the same category for "Touch Me In The Morning," and then wasn't nominated again until 1981 for "Upside Down" in the Best R&B Vocal Performance. Her last nomination to date was in 1983 in the same category for "Muscles." She didn't win any of those times, although she was up against winners Carole King, Roberta Flack, Aretha Franklin, and Chaka Khan, respectively, so it wasn't an easy decision for the judges most likely. Luckily, the Recording Academy made up for their oversight all those years by awarding Ross with the Lifetime Achievement award in 2012, so we can forgive them.

In 2012, she said in her acceptance speech, “It’s been many years, and I’ve watched all the changes in the industry. When I started, I think we were making 78s, then it was 33 1/3s, then it was 45s, then there was eight-tracks and then it was cassettes... We went from analog to digital, and it’s been such an incredible ride.”

If her 2019 Grammys performance was any indication, that ride isn't over yet. And now she at least has Raif as her backup dancer and hype man.