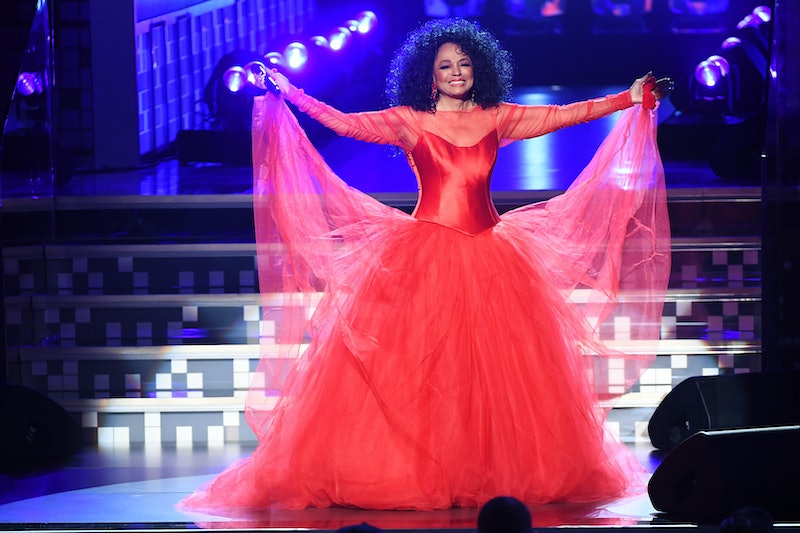 Is there a better way to ring in your birthday than with Beyoncé? Only a handful of people really know the answer to that question, and one of them is Diana Ross. On Tuesday, March 26, the legendary Motown singer threw a huge bash across two Hollywood venues to celebrate her 75th birthday, and the guest list was almost as iconic as Ross herself. However, the night’s biggest moment came courtesy of a certain Destiny’s Child singer. Beyoncé sang “Happy Birthday” to Diana Ross, and the whole world is obsessed with her gorgeous rendition.

The Supremes icon threw a star-studded bash at Hollywood club Warwick before moving the party over to the famed Hollywood Palladium, where she headlined her own 75th birthday concert, according to People. The show was dubbed Diamond Diana and billed as a “once-in-a-lifetime concert," according to the artwork shared by Ross on her Instagram. The poster for the event even included a dress code for the shindig, and it was specific and fit for a queen: “sequins, beads and feathers.”

The singer’s large family were VIPs on the guest list, including daughter Tracee Ellis Ross, son Evan Ross, and daughter-in-law Ashlee Simpson. Many longtime friends, like Motown founder Berry Gordy, and top celebrities (other than Queen Bey) were also in attendance according to People, including Sean “Diddy” Combs, DJ Khaled, Kris Jenner, Kourtney Kardashian, and Khloé Kardashian, who captured the moment that made the whole world go wild and posted it to her Instagram stories.

The crowd gathered around what Ellis Ross described as “the biggest cake ever," as seen in a video on Kardashian's Instagram story, to sing “Happy Birthday” to her mother, but the actor hatched another plan in her head at the last minute. “Beyonce? Are you still here?," Ellis Ross can be heard asking after delivering a speech about her mom. “Do you want to sing ‘Happy Birthday?’ Come on down!”

Being the humble performer that she is, Beyoncé obliged Ellis Ross and delivered an impromptu acapella rendition that had Ross beaming and cheering along at moments. The whole audience seemed enraptured, staying completely silent throughout (while still filming the moment, of course). The Hollywood Palladium also posted a video of the scene, which showed Beyoncé and Ross embracing in a warm hug after the unplanned performance.

And though it's hard to imagine that anyone could beat Beyoncé as the highlight of any soiree, other musical heavy hitters also took the stage to celebrate Ross. According to Instagram stories from the night, as reported by People, Diddy joined her on stage to perform a mash-up of her seminal hit "I'm Coming Out" and his song "Mo Money, Mo Problems". Robin Thicke duetted with the superstar on "Endless Love", while Evan and Simpson sang "Love Hangover" together. Even the Kardashian crew danced with Diana on stage as she sang "Turn Me Over" and "Ease on Down the Road".

In one of the night's most joyous moments, fellow icon Stevie Wonder sang his own rendition of "Happy Birthday" to Ross, solidifying her party as a night to remember. No one loved it more than the singer herself, who tweeted her gratitude in iconic fashion. There ain't no party like a Diana Ross party.