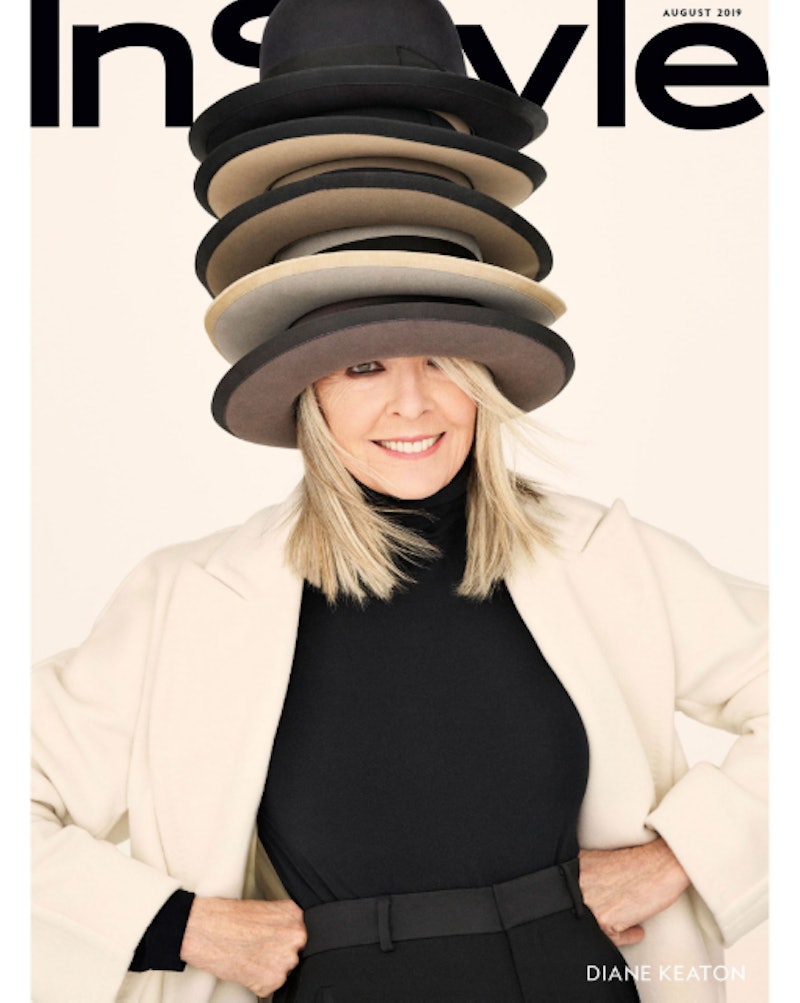 If you're a fan of Nancy Meyers movies or could watch First Wives Club on repeat forever, then you're likely also a fan of Diane Keaton. The actor has been a staple in some cult classic romantic comedies, and now, Diane Keaton's InStyle cover recreates Caps For Sale. The classic picture book was a staple for most elementary school classrooms, and if you're a fan of Keaton's style, you'll know that the recreation makes total sense.

On the cover of InStyle, Keaton wears a cream colored coat with a long sleeve black turtle neck and high-rise black trousers beneath it. While the look is typical of the actor's typical menswear-inspired wears, it's the accessories that steal the show. Keaton is rocking an actual pile of hats. Yes, a pile, and the image is so reminiscent of Caps For Sale that you'll get instantly nostalgic and remember that Keaton's signature sense of style is so good.

Keaton has a few different iconic style moments, like her full, circle skirts and fabulous suits, but she's also know for her collection of hats. If you follow the star on Instagram, you'll know that she's almost always in a fab piece of headwear. From bowler styles to wide brims to baseball caps, Keaton knows how to wear them, and now, she's wearing several in a total homage to Caps For Sale on the cover on InStyle.

According to the feature on Keaton from InStyle writer Sarah Cristobal, the actor actually styled herself for the shoot, and the cover? Well, it was inspired by one of Keaton's own Instagram posts. In it, the actor is wearing a multitude of hats (just like on the cover) and asking which she should wear or if she should wear them all. Clearly, all of the hats won out, and given that she styled herself, her most signature accessory was bound to be featured.

When asked about styling herself, Keaton admits that it's a bit of a protective measure to hide her own anxieties, but the topic soon turns to one of Keaton's favorite accessories: hats. In the interview with InStyle, the actors says, "And I’ve always liked hats. They just frame a head. But, of course, nobody really thinks they’re as great as I do."

In the interview, Keaton also details some of her famous roles in famous films like Annie Hall and how she moves past bad reviews. One of her most well-known roles was in the news only recently and proves that her films reach so many people.

When Ariana Grande released her song "Thank U, Next," the music video which payed homage to several well-known romantic comedies was a smash, but she had another movie-themed performance. When on the Ellen Show, Grande performed the song complete with an homage to Keaton's cult classic film First Wives Club and its famous "You Don't Own Me" scene.

Whether you've just become of a fan of Keaton thanks to Grande's performance or have long loved her roles in films like Annie Hall and her several Nancy Meyer's films, the actor is certainly both an acting and style icon. Clearly, she wear many hats (pun intended).