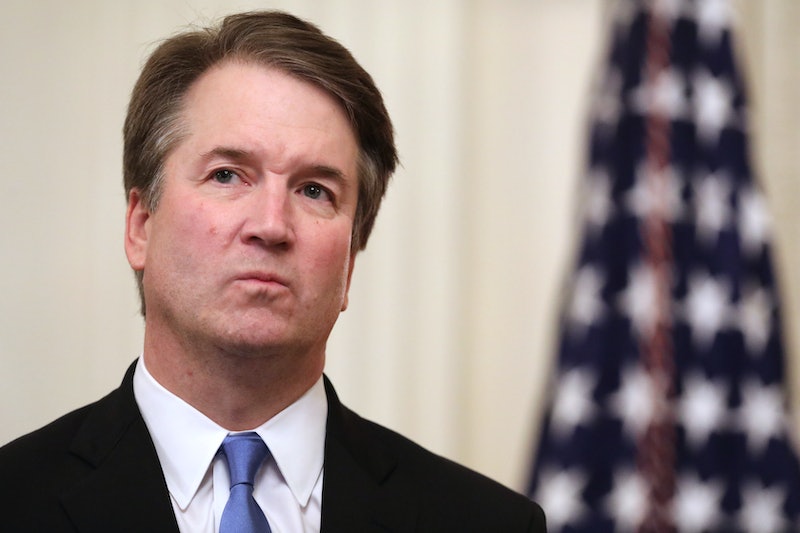 "I'd be in favor of opening up [an investigation into] the allegations, absolutely," Feinstein said Wednesday.

Kavanaugh was accused of sexual misconduct by multiple women prior to his confirmation to the Supreme Court earlier in the month. He categorically denied all of the allegations, and the Judiciary Committee investigated them before approving his nomination in September.

But the Senate — and, by extension, the Judiciary Committee — is controlled by Republicans, and its investigation was criticized by Democrats and experts on sexual misconduct laws, who argued that it was too limited and, more broadly, carried out primarily with the goal of clearing Kavanaugh's name. Feinstein is ranking member of the committee, and as such, will become its chairwoman if Democrats win control of the Senate in November. Should this happen, she would have the authority to reopen the committee's investigation into Kavanaugh.

Feinstein is also running for reelection in November, and she made the comments about the Kavanaugh investigation at a debate with her opponent, fellow Democrat Kevin de Léon (California holds "jungle primaries," in which the top two vote-getters in the primary face off in the general election regardless of their party).

De Léon, who is running against Feinstein from the left, said that he would "unquestionably" support another investigation into the Kavanaugh allegations.

Several women accused Kavanaugh of some form of sexual misconduct during his confirmation hearings. Dr. Christine Blasey Ford says that he pinned her to a bed, groped her, attempted to remove her clothes, and pressed his hand against her mouth when she tried to scream when they were teenagers; Deborah Ramirez says that he shoved his penis in her face in college; and Julie Swetnick says that he facilitated the gang rape of herself and others at various parties when they were young. Kavanaugh denies all of the accusations, and partly blamed them on Bill and Hillary Clinton while addressing them in front of the Senate.

Many Senate Republicans struck a similar note; Sen. Lindsey Graham said that Ford's allegation amounted to a "drive-by shooting" of Kavanaugh, while Sen. Orrin Hatch accused her of being "mixed up" in her recollection of what happened. Ford, meanwhile, has been getting death threats since going public with her story, forcing her and her family to move out of their home.

Ultimately, Lisa Murkowski was only Republican senator to vote against Kavanaugh's nomination, and he was confirmed to the high court by the smallest margin of any Supreme Court nominee in over 130 years.

The Judiciary Committee's investigation into the Kavanaugh accusations wasn't the only one that faced criticism for being too narrow. The FBI also carried out a probe into the allegations — but it lasted less than a week, and the bureau did not interview either Ford or Kavanaugh as part of it.