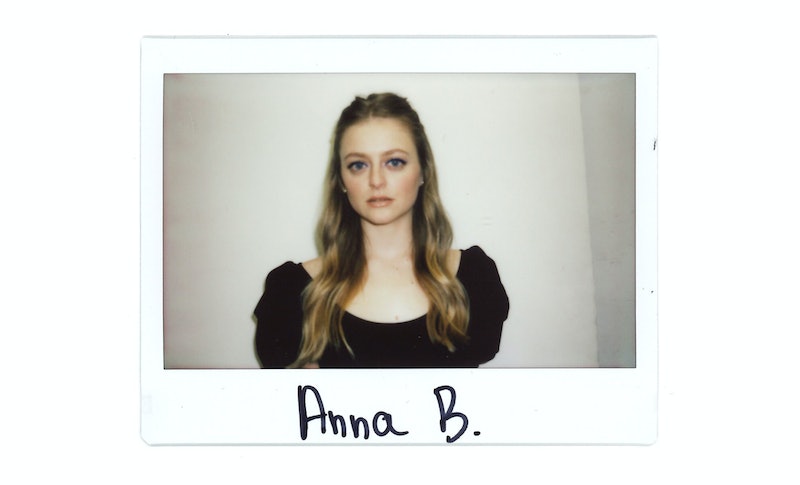 When celebrities hang out with Bustle writers, we want to give them the chance to leave their mark. Literally. So we hand them a pen, a piece of paper, a few questions, and ask them to get creative. This time, Dickinson star Anna Baryshnikov is leaving her mark in the Bustle Booth.

It’s more than a trap-heavy soundtrack and opium-fueled ragers that set Dickinson, the new Apple TV+ series about the poet Emily Dickinson, apart from formulaic period fare. It’s that showrunner Alena Smith takes the cast of priggish Puritans and pedants that usually surround a modern Victorian heroine and reimagines them as full human beings, brimming with the same range of emotions as the actors who play them. That's especially true of Lavinia Dickinson, a historical footnote credited for saving sister Emily’s letter-poems. In Dickinson, she’s a fully realized little sister — one who's earnest, envious, and boy-chasing.

“What I love about Lavinia is she's also bad at it,” says actor Anna Baryshnikov of her character's boy-crazy exploits. “Like in kind of a classic way. When you want something so badly, you just get nervous, and act like an insane person.”

Baryshnikov can relate. “I was really deeply terrible at the kind of college social scene,” she tells Bustle of her time at Northwestern University, where she never felt she fit in at frat parties. “I share that [Lavinia] wears her heart on her sleeve and just goes for it, even if it's not going to go well.”

Very confessional case in point: Baryshnikov’s semi-sorta-date with a maybe-paramour that ended far from happily ever after. “This is the saddest example, but in college there was a costume party where you brought a date and you dressed up as something together. I had a huge crush on this guy, and we had come up with doing Space Jam costumes. He wore a Space Jam jersey, and I painstakingly spent a lot of time on my Lola Bunny outfit.” And, then, the inevitable turn...

“And when we were at the party, I watched him, in what felt like slow-mo, lock eyes with an older girl in the world's most sophisticated Catwoman costume. I was just like, Oh, it's over for me. And then later that night I got my period in those white shorts.”

Strip the story of its anachronistic details, and it could be a scene ripped from Dickinson's bawdy house party episode — one built around Dickinson’s poem “Wild Nights.” In that episode, Lavinia plays the harp to get a boy’s attention but ends up bleeding from the face when a string snaps. “Honestly, attempting something that didn't go my way is definitely in my repertoire,” says Baryshnikov.

In another episode, Lavinia sits for a professional portrait and hates the results. Again, the actor sees parallels to modern life in this straightforwardly Victorian predicament. "A lot of women right now can share a certain part of Lavinia’s throughline, which is that she is so worried about how the world is going to perceive her that she desperately tries to control [her image]," she says. "We live in a really tricky time where everyone is constantly their own director, photographer, stylist, editor. We're recording our lives in this way that makes us so conscious of how other people perceive us.” But where Baryshnikov empathizes, she also sees an enduring personal challenge.

“By the end of the season, I think Lavinia arrives in a place where she realizes she is a better version of herself when she can let go of that concern, and I would hope the same as for me.” Get to know Anna on her own terms in her Bustle Booth questionnaire below.

More like this
'That '90s Show' Star Callie Haverda Got Advice From Mila Kunis & Ashton Kutcher
By Brad Witter
Hailee Kaleem Wright's Topsy-Turvy Path From MTV To Broadway
By Samantha Leach
At 28, Rosie Perez Risked Her Career To Stop Playing Stereotypes
By Gabrielle Bondi
'The Crown' Season 6 Has Suspended Filming "Out Of Respect" For The Queen's Death
By Bustle Staff
Get Even More From Bustle — Sign Up For The Newsletter
From hair trends to relationship advice, our daily newsletter has everything you need to sound like a person who’s on TikTok, even if you aren’t.