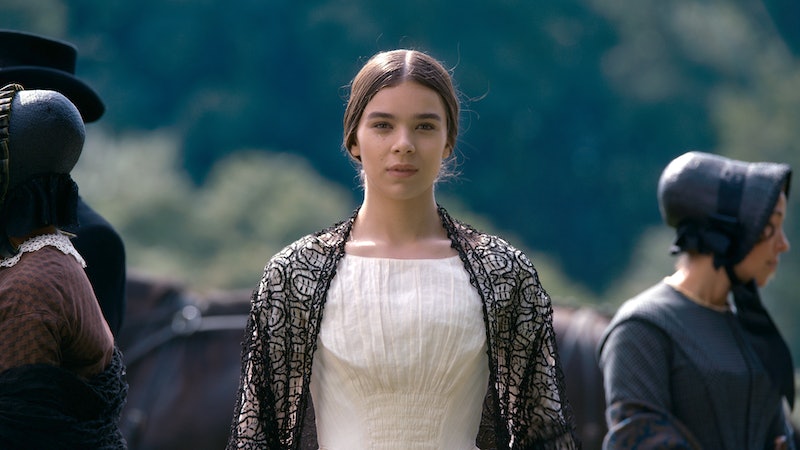 Emily Dickinson might not be for everyone, but f you saw the Dickinson trailer and a 19th century poet saying "dude" really spoke to you, then there's some very early good news. The new Apple TV+ series Dickinson is already set to return for Season 2, even though the new series on Apple's new platform just premiered on Nov. 1.

In October, The Hollywood Reporter reported that Dickinson had been picked up for a second season and that production was already underway. A number of other Apple TV+ shows, including Morning Show, See, Little America, and Home Before Dark were also reported to be getting second seasons long before their initial release.

Dickinson puts a modern spin on the poet's life, showing her as a young woman who rebelled against the conventions of her time. The show also has some fantastical elements, including Wiz Khalifa playing "Death" and a number of other contemporary touches.

"This is a coming-of-age story about a radical young female artist who was ahead of her time," series creator Alena Smith explained to Variety at the New York City premiere of the show. "One of my projects here is to say if Emily Dickinson wasn’t understood in her time, can we understand her better in ours? I'm intentionally using her life and her poems and the context of the 1850s in order to reflect on today. I would say that the show is more about us and more about today than it is necessarily a traditional Emily Dickinson biopic."

Star Hailee Steinfeld has related the way Dickinson was misunderstood in her time to the way many young women might still feel today. "The pressure that Emily Dickinson was under to feel or act or do certain things, I think women still feel that way," the actor explained during a Tribeca TV Festival panel in September, according to THR. "We hope that people see this and feel seen and feel heard, because that’s exactly what Emily was searching for, to be understood."

As one of the very first shows for Apple TV+, Dickinson debuts at the same time the streaming service does, which means the stakes are high for everyone involved with the project. Audiences are able to stream all 10 episodes of Dickinson at once, which is not be the case with the other new Apple series, according to IndieWire. In order to watch, viewers need to use the Apple TV app on their Apple device, on certain Samsung smart TVs, or by going to tv.apple.com on Safari, Firefox, or Chrome browsers. (More information on how to access Apple TV+ can be read here.) However you choose to watch, just get ready for a lot of partying, a lot of amazing costumes, and a lot of Emily Dickinson being so over the 1850s.

More like this
RHOP’s Robyn Dixon Explained Why Juan Paid For Another Woman's Hotel Room
By Brad Witter
'The Last Of Us' Episode Schedule Competes With The Super Bowl & Oscars
By Brad Witter
Grammys Host Trevor Noah Made Adele's Dream Of Meeting The Rock Come True
By Brad Witter
Pedro Pascal Barely Got Through The "Lisa From Temecula" 'SNL' Sketch
By Stephanie Topacio Long
Get Even More From Bustle — Sign Up For The Newsletter
From hair trends to relationship advice, our daily newsletter has everything you need to sound like a person who’s on TikTok, even if you aren’t.