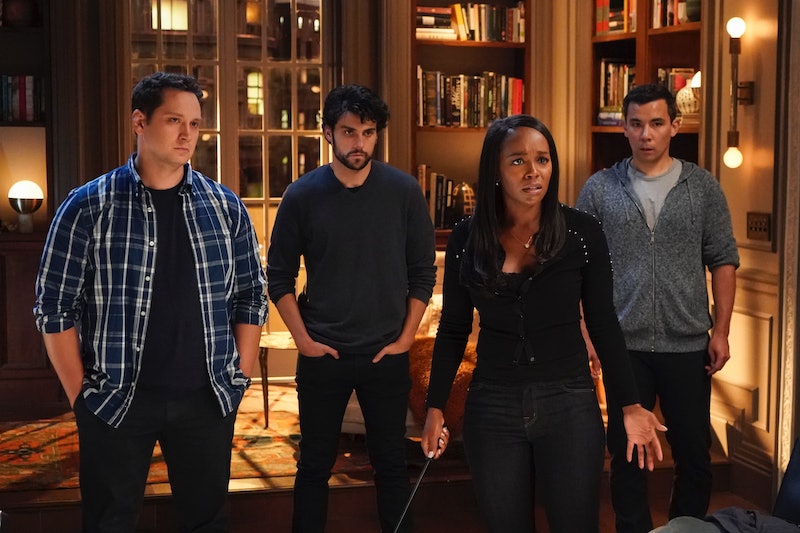 Spoilers ahead for How To Get Away With Murder Season 6. How To Get Away With Murder is not known for very realistic plot lines, so it’s no surprise that the final season opened with Annalise experiencing not one but several of her own funerals, flashing forward and back in time. The show has always used time jumps to tell a murder mystery, but this season it looks like the victim might be Annalise herself. Leave it to this show to make it so that Annalise dies in the final season of HTGAWM — killing the main character is a power move, and one the series hasn't been afraid of pulling ever before (RIP Wes).

Season 6 opened with Annalise in rehab after going on a bender after Tegan called to tell her that Emmett was dead in the Season 5 finale. Part of her therapy in rehab is imagining what people would say about her at her own funeral and we see that nightmare as she works through the visualization. But at the end of the episode, in one of its trademark time-jumping cliffhangers, How To Get Away With Murder seems to jump to Annalise’s actual funeral ceremony.

Killing off Annalise in the final season of HTGAWM might actually make sense for the series' arc. Showrunner Pete Nowalk told TV Line that he and his writers are going to “answer all the questions” and that those answers will come “very quickly in the writing process.” He said, “I hope the show moves really fast and keeps people on the edge of their seat and ultimately feels satisfying.”

It usually is anyway, given how the writers rely in unexpected plot twists. And there are some very convincing reasons (and motives) for Annalise to take a long dirt nap. Here's how it could eventually go down.

The Keating 4 Are Tired Of Annalise

How much do the Keating 5 love to hate Annalise? Let's count the ways: With the reveal that Michaela’s dad was a former client of Annalise’s, Michaela has already threatened Annalise’s life; Laurel still blames Annalise, partly, for Wes' death; Connor and Oliver have been jerked around incessantly; Asher has never trusted Annalise and is always looking for a way out. One, or all of her formerly loyal students could turn on her this season for good.

Tegan is a hard character to read, but she’s definitely hiding something. Tegan may have killed Emmett, and she would definitely kill Annalise if she got in the way of covering that up or any of her other goals. Nate seems to have some idea that Tegan was responsible for Emmett’s death — she looks way too comfortable in his chair — and Nate will likely share his suspicions with Annalise. With both of them on her case, Tegan has all the more motive to take 'em out.

We don’t know a lot about the woman who seems to be Gabriel’s mother, but we do know that she has a box with Sam Keating’s name on it. If Gabriel’s mother knows that Annalise helped cover up Sam’s death, resulting in a lack of money and support for Gabriel, who is Sam’s son, she might be inclined to hurt or kill Annalise over it. Wilder things have happened on this show.

Again, Nowalk says that the final season of HTGAWM will be full of twists and cliffhangers, but that the answers will eventually come. “There will be certain things where I want people’s imaginations to do the work,” he told TV Line. “But I like a good murder mystery. The people who have stuck with us have been so patient, I really just want to give an answer.”

One of those answers could be that someone finally puts Annalise out of her misery. As much as it would be nice to see her and the Keating 4 live happily ever after, HTGAWM is just not that kind of show.