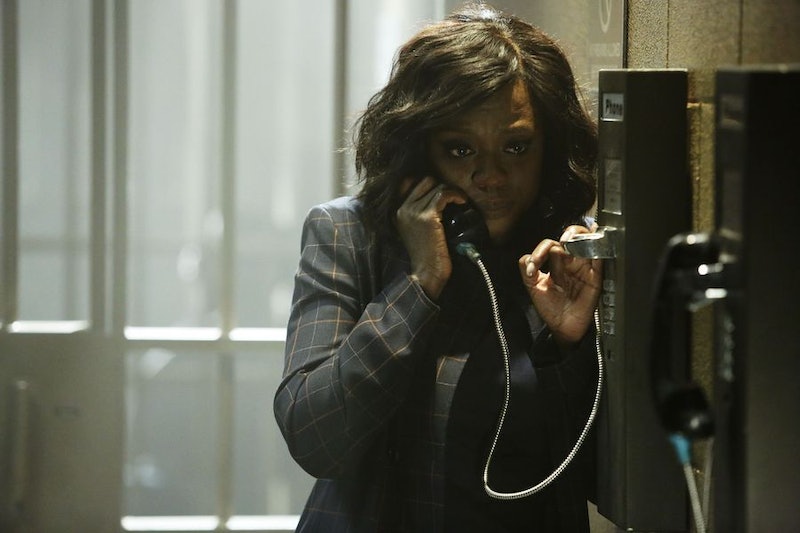 Spoiler alert for anyone who didn’t watch the fall finale of How To Get Away With Murder — I always knew that Wes was going to be the body inside Annalise’s charred house. It was too easy! I know there was some attempted misdirection with us being made to think it was Frank, but who would kill off my beautiful, formerly-bearded hitman? A crazy person, that’s who. Still, though, the question remains—who killed Wes on How To Get Away With Murder? I have more than a suspicion that Annalise was behind Wes' death.

Let’s take it back now, all the way to Season 2, when that whole story about Annalise being pregnant and getting in a car accident with her baby and the child dying. Annalise is a compartmentalizer, but she still never got over the death of her only child, which, I don’t know, if the child had lived, maybe she would be a completely different person. But I digress. Annalise got in a car accident because Frank accidentally set it up (this was when he was young and not a cold-blooded hitman), but really, Wallace Mahoney was responsible because he set up the hit on Annalise.

You see, Rose, Wes’ mother, worked for rich guy Wallace Mahoney, and she was the star witness in his son, Charles’ trial — he allegedly murdered his fiancée, and Rose was Charles’ alibi. Still with me? Good. Rose didn’t want to testify in court, which made Annalise’s job harder, and it also made Wallace Mahoney subtly threaten Wes’ life. Rose killed herself instead of testifying, asking Annalise to take care of Wes. The biggest kicker here is that Wallace Mahoney raped Rose many years ago, and Wes is his biological son, and also the brother of Charles. Wallace, wanting to make sure the decks were stacked in his favor, also ordered the hit on Annalise because if your lawyer dies during your trial, the judge will probably call a mistrial and you’ll be good to go. Annalise lived, Wes lived, and Annalise’s baby died.

Annalise has always taken a special interest in Wes, and I believe it’s because she wanted him dead. Annalise is the queen of the long con. Wes was the living embodiment of the fact that her son is dead — Wallace Mahoney is dead, Rose is dead, but Wes was still there. If Wes were never born, Rose may have testified in court, securing Charles Mahoney’s alibi and getting him off for murder. She would have won her case, Wallace Mahoney would have been happy, and he would not have ordered the hit on Annalise as insurance because Annalise couldn’t get her star witness to testify. Annalise’s baby would then still be alive, and Annalise and Sam could be happy parents to a fifth grader by now.

Rose feared for her son’s safety, so getting Wes away from her was the plan she thought would save him, but putting him in the hands of Annalise was clearly a mistake. Annalise, for a lawyer, is not a rational person. She’s vengeful, and she’s unkind, and setting up a murder is, oh, exactly what she’s good at. I don’t think she had this particular plan in mind when she had Wes put in her class, but it did work out the way I think she wanted it to, especially after she found out that Wes was about to flip on her to the police.

Annalise is likely behind Wes’ death because he is, irrationally, the reason why her baby is dead. If Wes never existed, Annalise’s baby would have lived, and that is why Annalise needed to get rid of him.