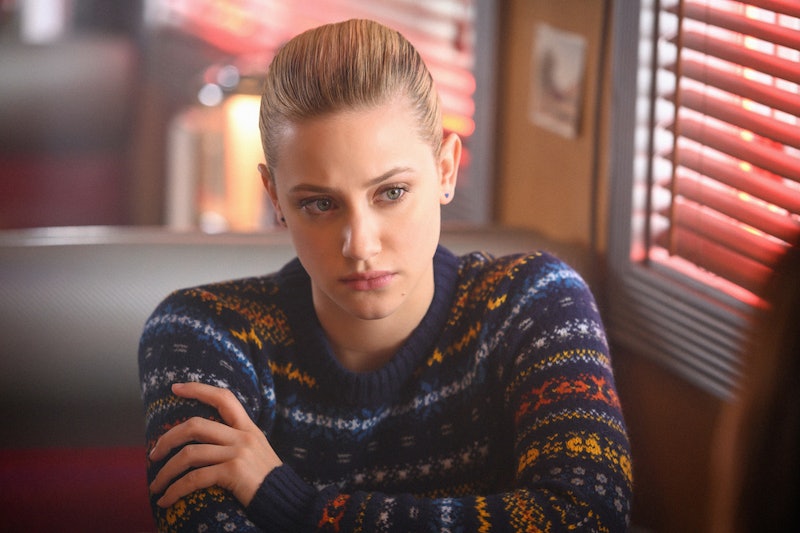 Spoilers ahead for the midseason finale of Riverdale Season 4. Bughead may be as dead as Jughead is, because Riverdale is making it look like Betty killed Jughead. In a flash-forward at the end of the midseason finale, Betty was shown standing with a bloody rock in her hand while Jughead lay on the ground, bleeding from his head. Archie checked his pulse, confirming he was dead, then looked up in horror. "What did you do Betty?" he asked. What did she do, indeed.

Because Betty looked as shocked and upset as Archie about her boyfriend's sudden demise, it seems like she attacked Jughead in a fugue state akin to the one she entered to help her younger self. Earlier in the episode, Betty discovered that The Farm had hypnotized her using a trigger word (tangerine) that, when said three times, results in her going into her own mind to confront "Dark Betty." One such fugue episode caused her to dig her nails into her own palm until she bled, while another led her to break a mirror. So clearly, this fugue state can be dangerous. What if someone triggered her with the "tangerine" code word and Dark Betty attacked Jughead? That would explain why she seems like she's coming out of a trance when Archie pronounces Jughead dead.

The rock in Betty's hand indicates that she delivered the fatal blow to Jughead's head, and it also mirrors the scenario with her cat, Caramel, when she was growing up. Her father manipulated her into killing Caramel with a rock in order to put her out of her misery. Perhaps Betty came upon an injured Jughead and couldn't help but try to put him out of his misery, too?

That said, there's still a chance that the flash-forward is just an extension of one of Betty's fugue states, and Jughead isn't really dead. After all, everything that actors Lili Reinhart and Cole Sprouse (who play Betty and Jughead) have said about their characters' relationship in Season 4 suggests things end up OK between them. For example, Sprouse told Glamour in July that Bughead would hit a bump on the road because of their long distance relationship with him away at school, but that it would turn out all right. "They might fall, turn away from each other, only to come back together way stronger. I think they're gonna be really good."

"I think Betty is someone [who is] going to go and end up with her high school sweetheart ... It doesn't mean maybe they won't explore other people and break up along the way, as a lot of people do, but I think they're going to come back together and be strong at the end of it all."

Both Sprouse and Reinhart used that phrase "come back together stronger," which would not be the case if Betty kills Jughead in cold blood. And even if Betty was somehow responsible for Jughead's death, she probably didn't do it on purpose. If she had, there's no way Archie would still be hanging out with her in all the other flash-forwards. He's Jughead's best friend and all about justice.

All of that suggests that, as usual, the flash-forward isn't as it seems. Unfortunately, Riverdale fans will have to wait until mid-January to find out the truth.

More like this
Does 'Locke & Key’s Ending Mean There Could Be A Season 4?
By Sophia Moore
'Better Call Saul’s Co-Creator Explained Jimmy & Kim’s “Happy Ending” In The Finale
By Brad Witter
Who Plays Trent In 'Never Have I Ever'? Benjamin Norris Calls His Character A “Himbo Stoner”
By Grace Wehniainen and Radhika Menon
Netflix Reveals First Look At Wednesday In The 'Addams Family' Spinoff Series
By Bustle Editors
Get Even More From Bustle — Sign Up For The Newsletter