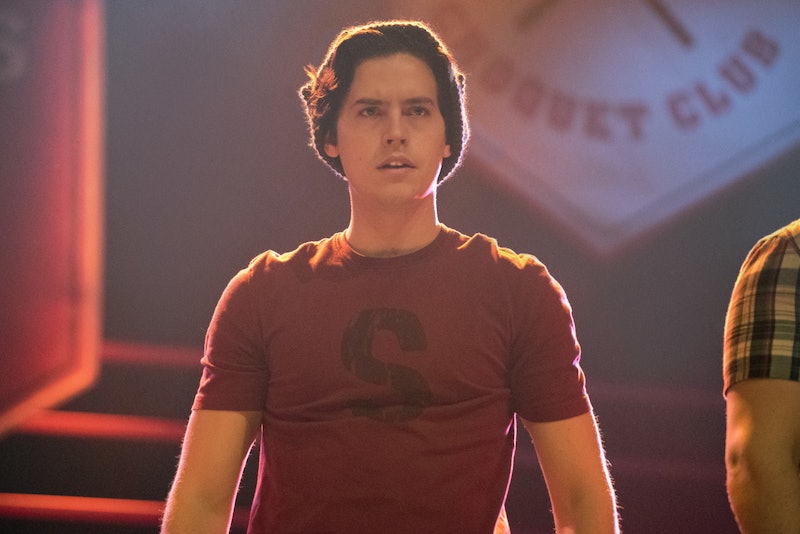 At the end of Season 3, it was pretty heavily implied that Jughead will die in Riverdale Season 4. In a cliffhanger flash-forward, Betty, Veronica, and Archie were shown covered in blood and burning their clothes — including Jughead's blood-soaked beanie. Afterward, Betty asked everyone to swear they'd never speak of whatever happened again.

When Riverdale's Season 4 trailer was released in September, it didn't allay an fears about Jughead's fate, showing a massive forrest search for our dear, beanie-wearing narrator and a shot of him in what looks like a coffin. But for as much as the show may be trying to convince us that Jughead dies, there are plenty of reasons to believe he'll be OK.

Firstly, Jughead was at one point intended to be in the scene. As Riverdale creator Roberto Aguirre-Sacasa explained to Comicbook.com, he initially wrote it with only Betty, Veronica, and Archie, but then the studio asked him to put Jughead in and he acquiesced. He ended up cutting Jughead again after Cole Sprouse refused to film in his underwear in the cold with his co-stars, but if they were able to switch the scene around so easily, clearly Jughead's absence doesn't have much bearing on his future storyline.

"I said, 'You know what? I think Cole's right. I think if he doesn't want to be freezing, I don't think he should be in the scene,'" Aguirre-Sacasa told Comicbook.com. "And then the network and studio were like, 'Why wasn't Cole there?' I was like, 'He didn't want to get cold.' So it was a great confluence of events."

Of course, Riverdale could still choose to kill Jughead off in another way, but even the show's stars think that's unlikely to happen. "Really, I don't think we can kill Jughead," Marisol Nichols, who plays Hermione Lodge, told TV Guide. "I think there'd be riots and protests and stalkers and everything else under the sun."

However, if Jughead does get killed off (even though he's a main character in a main relationship and the narrator of the whole series), Sprouse still doesn't think that would be the end of the character's time on the show. "To be honest, I think there could be a Riverdale without every single one of our characters. And then we'll appear as ghosts, or our twins will take our place," he told Variety.

On the off chance that Jughead is fated for death, fans can take comfort in knowing that he'll be alive and well for at least a few more episodes. According to TV Guide, the first half of Season 4 is spent building up to that clothes-burning flash-forward, while the second half of the season is the fallout from that moment. Sprouse also confirmed to Variety that his character is in the episodes dealing with Fred's death, which was written into the story after actor Luke Perry died in March.

So whatever Jughead's fate is, he'll still play a pivotal role in Season 4. Plus, TV Guide reported that any Jughead-related questions will be resolved by the midseason finale, which means there are only a couple of months of dread to go until the show (probably) reveals that yes, Jughead will be just fine.

More like this
Nicola Coughlan Shared A Lady Whistledown Excerpt From ‘Bridgerton’ Season 3
By Grace Wehniainen, Alyssa Lapid and Sam Ramsden
The 'Bachelor In Paradise' Schedule Shifts To 4 Hours Every Week After The Season 8 Premiere
By Brad Witter
A New 'And Just Like That' Table Read Pic Confirms A Key Character's Return
By Jack Irvin and Grace Wehniainen
Everything You Need To Know About ‘Black Panther: Wakanda Forever’
By Bustle Editors
Get Even More From Bustle — Sign Up For The Newsletter