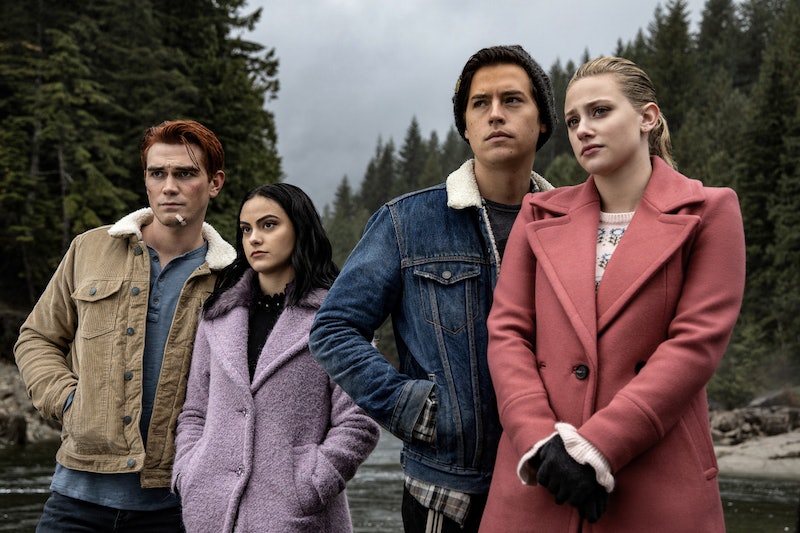 Series creator Roberto Aguirre-Sacasa promised to explain Jughead's fate in the midseason finale, but expect there to be plenty of mysteries left to solve when Riverdale Season 4 returns. For every answer Aguirre-Sacasa gives, he introduces 10 more questions. But fortunately, he won't leave fans hanging in suspense for too long.

Based on schedules for the previous two seasons, Riverdale is likely to come back from hiatus around Jan. 15, 2020, which means you'll have a month to sit with whatever fallout the Dec. 11 episode brings. However, there are already a few tidbits about the back half of the season to tide you over until ten. According to Decider, Season 4 is going to be a total of 22 episodes, which leaves 13 still to come — and a lot of ground left to cover.

In an interview with TV Guide, Aguirre-Sacasa revealed that after the flash-forward with Jughead's beanie is resolved in the midseason finale, the rest of Season 4 will be "dealing with the repercussions from that flash-forward." The midseason finale trailer also shows Betty's mom attacking Betty with a knife, so there will be a lot to unpack there. Plus, Jughead's grandfather Forsythe Pendleton Jones I has been cast for Riverdale and will appear in the midseason finale (either through a flashback or through a reveal that he's not dead after all). That's a storyline that can certainly extend into the rest of Season 4.

Beyond that, Aguirre-Sacasa hinted to Us Weekly in July that Season 4 could include a love triangle akin to the one between Betty, Archie, and Veronica in the comics. "My hope is that this season we'll [play in] a lot more of the high school stuff and more of the love triangle stuff," he said. He'd also previously told the magazine that he felt Riverdale "would be a failure" if it didn't explore "Archie and Betty together romantically." Maybe if Betty and Archie actually think Jughead is dead, it will open up a chance for a relationship between them?

One confirmed Season 4 plotline is that there will be a crossover between Riverdale and the upcoming Katy Keene show that follows Lucy Hale as the titular character and Riverdale's Josie McCoy in the Big Apple. E! News reported that the Feb. 5 episode of Riverdale will feature Veronica visiting New York and going shopping with her old friend Katy. It airs the night before Katy Keene's Feb. 6 premiere.

"Before Katy Keene officially premieres, we all thought it would be super fun to do a crossover that took Veronica to Katy's world — New York City — and established Katy in the Riverdale universe," Roberto Aguirre-Sacasa and Michael Grassi said in a statement to E! "For our first Riverdale/Katy crossover, we couldn't be more excited that it's old friends Veronica and Katy — Cami and Lucy — having fun and heart-to-hearts."

With all of that in mind, it sounds when Riverdale comes back, it will be up to all of its old tricks: relationship drama, potential character deaths (and surprise returns), and some classic high school fun for good measure.

More like this
An 'Everything Everywhere All At Once' Star Just Joined The 'Loki' Season 2 Cast
By Grace Wehniainen
The 'Andor' Timeline, Explained
By Gretchen Smail
Alicent's Green Dress In 'House Of The Dragon' May Be An Act Of War
By Kadin Burnett
'The Rings Of Power' Episode 4 May Put A Face To Season 1’s New Villain
By Kadin Burnett
Get Even More From Bustle — Sign Up For The Newsletter