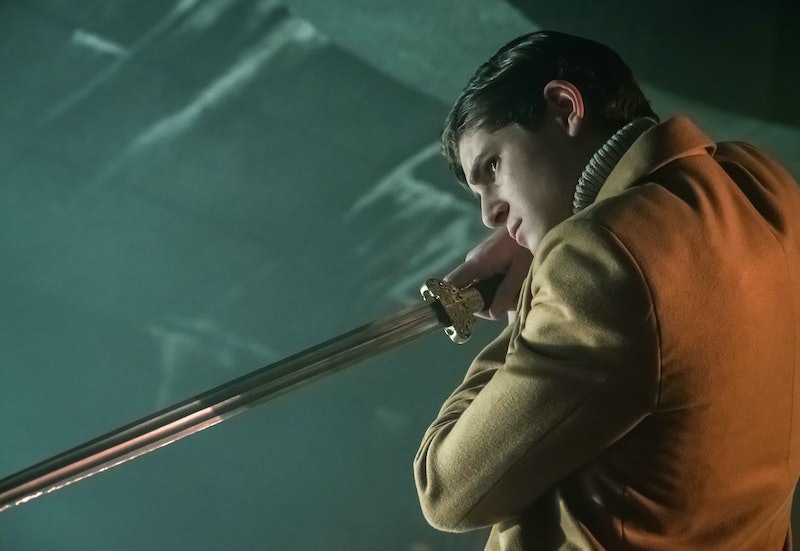 The final image of Gotham Season 3 is Bruce Wayne, standing over the city, ready to protect its citizens from suffering the same trauma he went through 60-odd episodes ago in the series premiere. Bruce finally become a vigilante on Gotham, and in a roundabout way, he has Ra's al Ghul to thank. Because if it wasn't for that awful moment when Bruce kills Alfred with al Ghul's sword, the teenager wouldn't have broken out of his hypnotic Shaman training. Alfred gets a lot of credit too, since his speech encouraging Bruce to find what he cares about the most inspires his charge to take to the streets with an improvised costume (no bat theme yet) and disarm a mugger who could have created another Bruce Wayne.

Of course, those wondering whether or not Alfred will really die don't need to worry. That "water" in the secret hideout was from one of Ra's al Ghul's chemical deposits, known in the comics as the Lazarus Pits. which has regenerative powers. The Lazarus Pits are named after a very famous resurrection story, and their regenerative powers are super strong. It's strange to say so, considering that the person who he loves most in the world ran a sword through him, but other characters weren't as lucky as Alfred in the Gotham two-hour Season 3 finale.

While under the influence of the virus, Jim stabs Fish, killing her for the second and presumably final time. Tabitha kills Barbara, as revenge for Barbara killing Butch... or, at least incapacitating him with a shot right between the eyes. It seems like Jervis Tetch didn't make it, and Ed Nygma gets hit by Victor's freeze ray on Oswald's orders. All that, and the Court of Owls' plan did work — they caused mass chaos and surely at least a few casualties by releasing the Tetch virus, even if Strange and the GCPD are able to whip up a cure fairly quickly. (Though even that was only 90 percent effective, according to the news report Bruce was watching in Alfred's hospital room.)

Jim and Harvey can't handle all of Gotham City's crime on their own, no matter how good their intentions. Now that Bruce has adopted his vigilante persona and decided to actively crusade for justice, he'll have a lot to look into when Gotham returns for its fourth season in the fall of 2017.