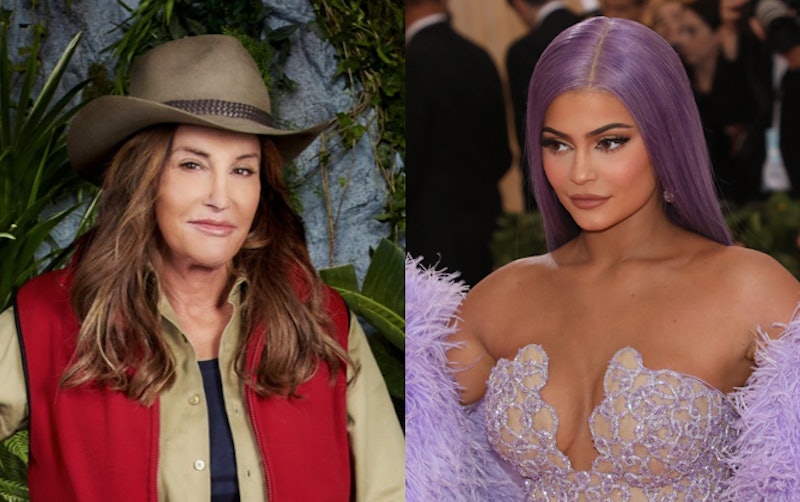 It's all going down in the jungle and I'm not talking about gross things being eaten. Nope I'm talking about hot goss. And guys, Caitlyn Jenner may have dropped a hint that Kylie Jenner is pregnant.

It all comes down to a mysteriously large number being given by Caitlyn when discussing her family. The Mirror reports that Kate Garraway and Jaqueline Jossa were quizzing the star on her family tree and, when asked how many grandchildren she has, she said: "This December I'll have 20."

In fairness, with such an enormous brood, one might well struggle to keep up. However, canny detectives (AKA reality TV fans) have done the maths and you guys — it just doesn't add up. In fact, according to Cosmopolitan, the reality star has 16 grandchildren with two in utero. Meaning that's two unaccounted for.

So obviously fans have pretty much started knitting mittens and are hoping for another Christmas surprise in the form of a brand new sprog for TV's most familiar family. According to Hollywood Life, a source close to Kylie claims she isn't pregnant and found the whole thing pretty hilarious. Which I guess makes sense because having rumours spread about you is sadly part and parcel of living in the public eye.

Rumours regarding Kylie being pregnant are old hat and TBH not that unbelievable considering that she successfully managed to stay out of the public eye while pregnant with her first baby Stormi.

I'm not claiming to be a doctor or fertility expert but for a baby to be due in December, she probably would have had a bump by Halloween. And unless she's delivering a Polly Pocket doll, there was no hint of a bump when she dressed so flawlessly as Ariel from the Little Mermaid.

Caitlyn has proved to be well worth the reported £500,000, according to Hello, that she's been paid for the gig. From the get go she's been grilled by fellow campmates about the family that made her a household name. However, despite her entertainment value, The Sun has reported that this year the bookie's favourite to win is Roman Kemp, radio DJ and son of Martin Kemp.

More like this
Twitter Is Still In Hysterics Over 'Love Island's Chaotic Heart Rate Challenge
By Frances Stewart
The 'Love Island' Contestants *Do* Know Who Gemma's Dad Is, After All
By Bustle UK
Fans React To Kelly Holmes’ “Extraordinary” ITV Documentary
By Sam Ramsden
Yes, Luca Bish Really Doesn’t Drink Alcohol
By Shahed Ezaydi and Sophie McEvoy
Get The Very Best Of Bustle/UK