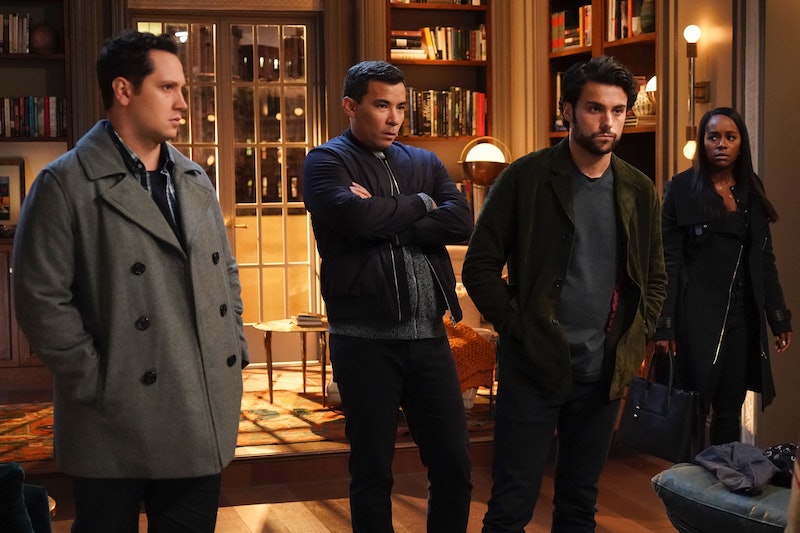 Spoilers ahead for HTGAWM Season 6. The final season of How To Get Away With Murder is taking viewers on a bumpy ride through time and it seems like it's all going to end with Annalise's inevitable death, given that viewers have seen what appears to be her funeral in a flash forward. But through the shows' trademark flash-forwards and flashbacks, viewers are just learning how it ended up there and now, there's a new suspect. It's possible that Connor may have killed Annalise on HTGAWM, although Michaela has been the prime suspect so far. Turns out, they both have motive.

Earlier episodes of Season 6 showed a flash-forward to Michaela sitting in an interrogation room with two police officers telling her that she was responsible for the murder of an FBI informant and they want to know why. Oct. 10 episode, "Do You Think I'm A Bad Man?" took this interrogation room scene one step further, with Connor in the next interrogation room being questioned for what seems like the very same crime.

And it seems like he and Michaela could have worked together, because when the police asked Connor if he wants to cooperate with their investigation, he says he'd have to talk to Michaela first. These two have always been close, so conspiring with each other isn't too far out character for either of them.

Of course, it's all for naught, because Connor promptly has what looks like an asthma attack and collapses to the floor. Previews show a shocked Michaela in the next room, and... that's it. Connor could be dying or he could be faking it as an elaborate way to get out of questioning. Hasn't Annalise taught the Keating 4 as much? When in doubt, lie your pants off.

Michaela's motive to kill Annalise is pretty plain to see. Annalise sent Michaela on a wild goose chase to find her birth father, and she thought that he passed away. But it turns out that, according to tapes of Annalise's psychiatric sessions with Sam, Michaela's father might be the lawyer that Annalise was working for when she represented Dwight, who Michaela thought was her father.

Apparently this lawyer, Solomon, was sleeping with Michaela's mother and got her pregnant. Michaela is already angry with Annalise because she never told her that she knew Dwight, so she'll be even angrier when she can process this.

Connor's motivation is different — because we don't know it yet. Connor is one of the only remaining of the Keating 4 that we don't know how Annalise fits into his back story. She knows everything about all of her students, and she's handpicked each to be a part of her special squad. Connor had everything to gain with Annalise, so whatever she did or does to him in the final episodes of Season 6 have to be worthy of a murder. He's getting more and more cavalier in his court cases and confidence in taking charge with what he thinks is right, so maybe Annalise crosses him in a way he can't go back from.

Connor, after all, doesn't know everything that Annalise does. She could ruin him professionally, making him kill her, or maybe her backstory with him is the most twisted of all. In either case, it could be enough to take Connor to the end of his line — and Annalise with him.