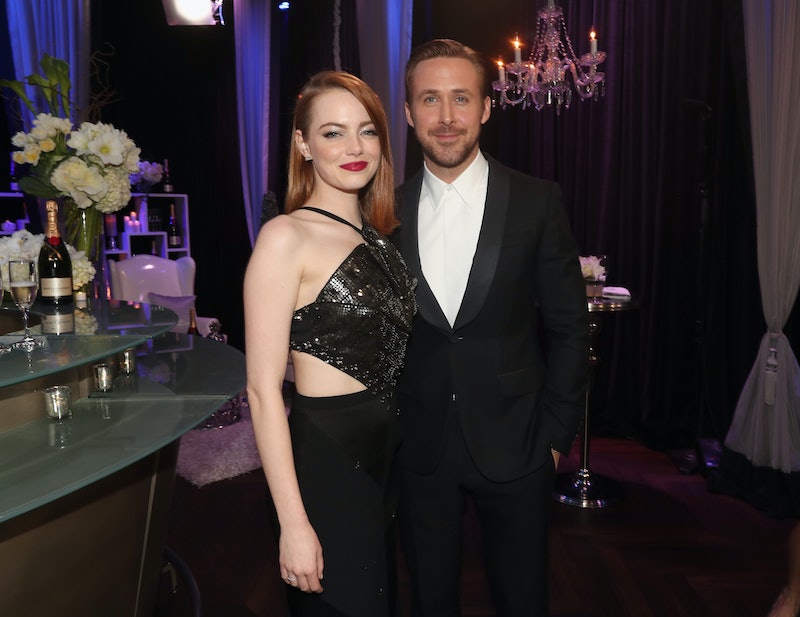 Filmgoers seem to be falling in love with La La Land, a romantic movie musical by director Damien Chazelle. The film stars Emma Stone and Ryan Gosling as lovers who follow their Hollywood dreams. The chemistry between these co-stars have people wondering if Emma Stone & Ryan Gosling dated in real life, since they have also played each others' love interests in Crazy, Stupid, Love and Gangster Squad. Rumors about the duo dating have often circulated, but Stone and Gosling themselves have never confirmed any kind of romantic relationship throughout their on-screen collaborations.

Besides, Gosling has been with partner Eva Mendes since 2011 and the couple has two daughters together. Stone had been dating The Amazing Spiderman co-star Andrew Garflield until 2015 and have been spotted together in 2016 reportedly as friends. But even though Gosling and Stone have been in other, confirmed relationships, the rumor mill still linked them together in a 2011 alleged frozen yogurt date, reported by the New York Post's Page Six. Early last year, the rumors once again circulated as Stone and Gosling filmed La La Land, but they were just that — rumors.

As much as fans wish these two amazing actors would join forces as a couple in real life, I think everyone should appreciate them for who they are: two co-stars with great chemistry and who are willing to share them chemistry with audiences in multiple movies.

I mean, their hands and feet are even immortalized together in concrete at the TCL Chinese Theaters in Hollywood — and as everyone knows, concrete is forever.

Last year, Stone told The Daily Beast that she enjoyed working with Gosling, because they're friends and they know each other so well professionally at this point. “To work with Ryan again, who is my buddy, it’s wonderful to get to work with someone you know and trust so much as an actor and as a human being. So it was great,” she told the publication in an interview.

Gosling told CNN at the La La Land premiere last month that he felt that Stone really came into her own during the filming of the movie. "She shows so many of her talents in this film," he told the network. "I thought I knew they were there, but I didn't see them in full bloom until we shot the film."

So even though Stone and Gosling may not be a couple in real life, the two co-stars sound so supportive of each other and seem like great friends.