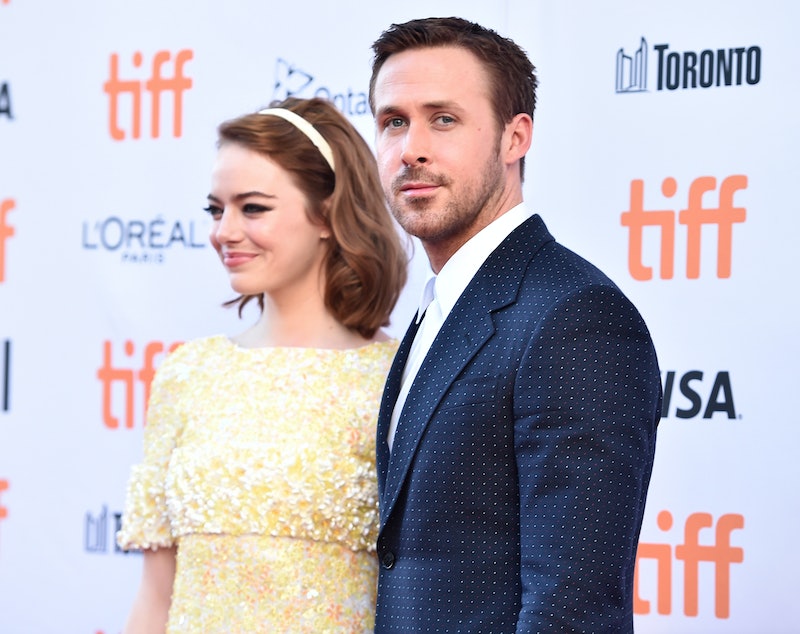 Just in case you're the last person on Earth who isn't yet convinced that these two are the perfect onscreen couple, listen to Emma Stone and Ryan Gosling's duet for La La Land called "City of Stars," and it will remove every shadow of a doubt. Not that anyone should be surprised at this point, but the pair sounds perfect together. Please call Julia Roberts and Richard Gere, and Meg Ryan and Tom Hanks, to tell them thanks for submitting, but there seems to be a new A-List power couple at the top of the pile.

I can't believe we've honestly been given this gift after the embarrassment of riches that was Stone and Gosling's sexual chemistry in Crazy Stupid Love and Gangster Squad, but the dynamic duo is starring in a musical this time around. La La Land is coming out on Dec. 9, which is the same day the full soundtrack will be released, but "City of Stars" dropped Friday as a kind of preview to get everyone excited. If you preorder the album on iTunes, you get "City of Stars" as an instant download and can start listening to it right away.

Now, if the world was fair, Gosling and Stone's voices would clash, and you'd listen to their duet on "City of Stars" and say to yourself, "Well, maybe next time." They already look beautiful together, compliment each other perfectly when it comes to acting, have an absurdly delightful onscreen rapport, and are friends off-camera. Surely they can't also harmonize like a dream.

But hey, guess what? They harmonize like a dream. I want to be mad about it, but I just keep listening to "City of Stars" and getting all sentimental and lovelorn instead.

Curse you, Emma Stone and Ryan Gosling. Every time I try to shake my fist at them, I end up stroking the back of my hand down the side of my face in the mirror instead, wishing that I had developed some sort of immunity to their on-camera romance by now. But like all everyone, I'm still susceptible to their charms. You better believe I'll have my butt in a theater seat on Dec. 9, humming along with "City of Stars" and buying what these two are selling hook, line, and sinker. This song just reinforces why.