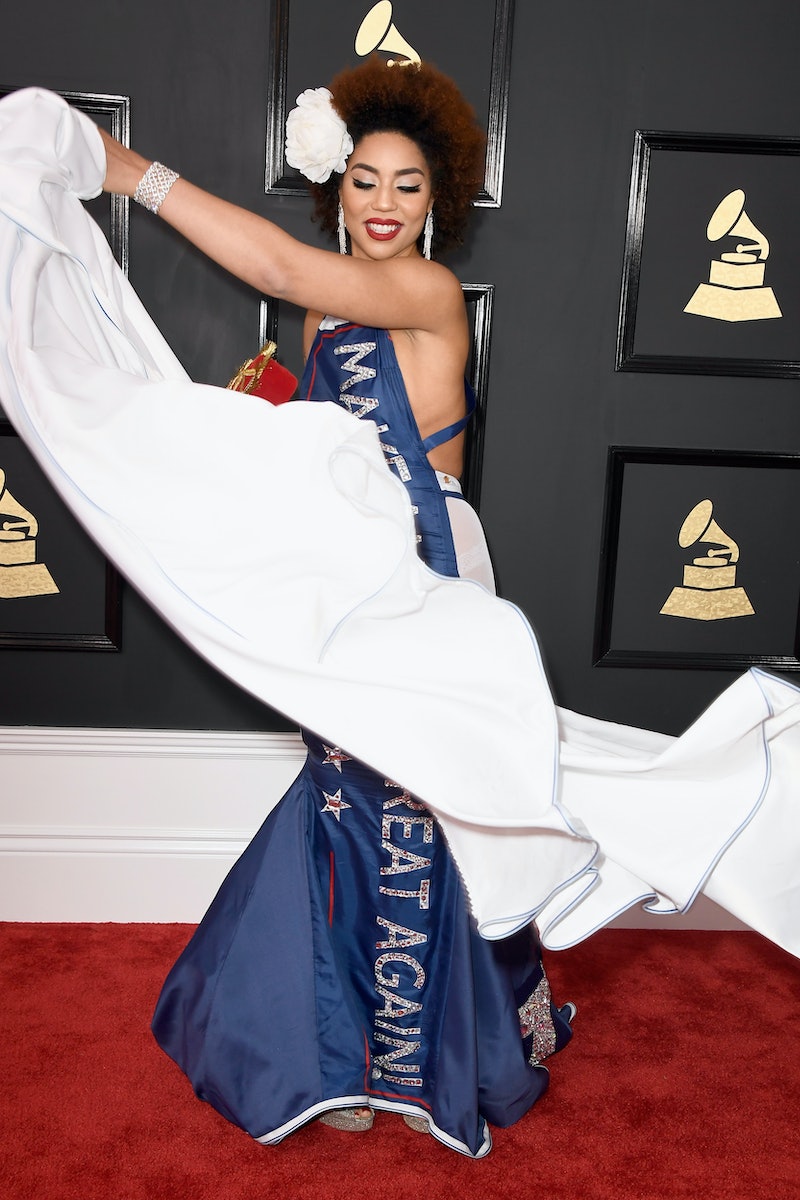 Musician Joy Villa proudly showed off one of the Grammy Award's most controversial looks when she arrived at the event in a dress reading "Make America Great Again," i.e. President's Trump's campaign slogan. And if you were in any doubt as to if this was a political statement, the hem of the dress read "Trump." So did Joy Villa vote for Trump? It's a fair question. While the singer argued via Instagram that her look was about being "free to express yourself," a less charitable interpretation would be either that she's a genuine Trump supporter or she was hoping to gain a lot of publicity from her fashion decision. So which is it? Bustle has reached out to Villa for comment, but did not receive an immediate response.

Her Instagram previously implied that she was politically neutral, with her posting a meme shortly after the election that read "After the election, if you win, don't gloat, if you lose, don't despair" and accompanying it with the following text:

Keep your spirits high my friends, we shall overcome and persevere! 😊💥😘⚡️🎆 let this be a chance for us to #UNIFY instead of #DIVIDE I love you, be bold! #election2016 #trump #hillary #election#staystrong

The use of both a Trump and a Hillary Clinton hashtag seemed to suggest she was on the fence, politically.

She even pulled a Taylor Swift and posted a photo on the day of the election celebrating the joy of voting without any further details or hashtags to confirm who she was actually voting for.

However, her Twitter gave some more clues that maybe the reason she seemed so political neutral was that neither Trump nor Clinton represented her interests. In a tweet on Nov. 8 she referred to the pair as "two crazy candidates" and advocated votes for the other candidates on the ballot. The Facebook post she linked here seems to have since been deleted.

In short, there's no conclusive evidence as to whom Villa voted for. However, from her Twitter, it looks as if she voted for neither Trump nor Clinton, but for one of the other candidates on the ballot in New York City, where she seems to be based: Green party candidate Jill Stein or Libertarian candidate Gary Johnson. Since she mentioned three, perhaps Villa was referring to the possibility of a write-in vote.

If I had to hazard a guess, given that Johnson was campaigning on a pro-legalization of marijuana platform and given the tweet above from Villa showing her actively campaigning against California's Proposition 64 (which led to the legalization of recreational use of marijuana in the state), I would assume she may not have felt inclined to give Johnson her vote. As such, Jill Stein seems more likely.

So, does Villa really dig Trump? Quite possibly. But she probably didn't vote for him.