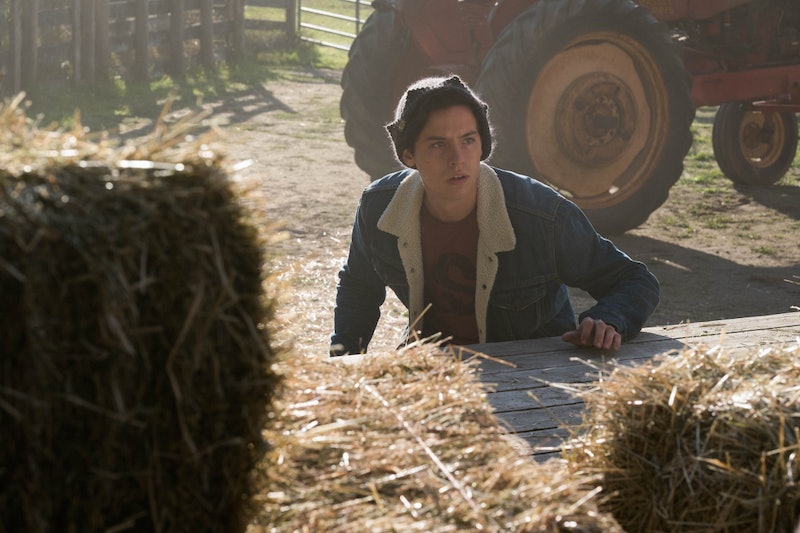 Ever since Riverdale's Season 3 flash-forward, fans have been speculating that Jughead will die in Season 4, and the Halloween-themed Oct. 30 episode seemed to confirm those fears. Another flash-forward showed Betty and FP identifying a body at the Riverdale Coroner's Office that looked an awful lot like Jughead. But considering the two didn't seem that broken up about it, some viewers now think Jughead will fake his death.

In the scene, FP is covering his mouth, similar to the way an improv actor would if they were trying not to laugh. It felt way too much like he was trying to act shocked, rather than actually absorbing the fact that his son is dead. Betty, meanwhile, just looked stoic and unshaken. If that was really Jughead's body, wouldn't FP and Betty both be completely devastated?

Instead, fans have a few alternative ideas about what might be going on. One is that Jughead took some kind of heart-slowing drug that made it seem like he was dead, or that he used a fake body. Another theory is that it's Jughead's twin or another relative who's dead. In the comics, Jughead has a cousin named Nathan who looks a lot like him. He also has a younger, similar-looking cousin named Souphead. Riverdale has been fond of twin and triplet reveals over the years, giving Cheryl Blossom's dad a twin out of the blue and even giving her and Jason a triplet in the Halloween episode. Maybe Jughead has a twin too? Star Cole Sprouse's real-life twin Dylan Sprouse could easily play him, which Sprouse even seemed to tease in a recent interview with Variety.

"To be honest, I think there could be a Riverdale without every single one of our characters," he said when asked about Jughead's fate. "And then we'll appear as ghosts, or our twins will take our place." Yeah, twins.

It's also possible, though, that that really is Jughead's body and he really does die. Riverdale creator Roberto Aguirre-Sacasa has been cagey about what happens to Jughead, but he suggested to Us Weekly that fans should be worried.

"One thing that's happening next season is that the kids are going to be seniors. We talked about how that's the last time that some of them will ever be together, and that it's a really, really special time," Aguirre-Sacasa said. "And we felt one way to subvert that was if something terrible had happened to the core four ... You know, I would be [worried about Jughead.]"

Of course, the "terrible" thing that happens to them doesn't necessarily mean Jughead dies. There's a theory that Jughead kills someone — perhaps Brett Weston Wallis from Stonewall Prep — and has to fake his death and leave town to avoid getting caught. Perhaps the group burned their clothes and Jughead's beanie to help cover up the crime while Jughead was escaping Riverdale. Or maybe the only way to get Jughead out of Stonewall Prep and away from certain doom was to fake his death so he didn't wind up like the Stonewall Four.

Whatever the case, Sprouse shouldn't start looking for new jobs just yet. "I think we kind of say, no one's ever actually dead on Riverdale," Lili Reinhart, who plays Betty, told Distractify. "Even when you're buried in the ground, you can still come back."

More like this
'The Queen’s Gambit' Season 2 Tweet Wasn’t From Anya Taylor-Joy
By Mary Kate McGrath, Jack Irvin and Grace Wehniainen
Netflix Shut Down 'Bridgerton' S3 Rumours About A “Very Dark” Storyline
By Bustle
'The Last Of Us' Episode Schedule Competes With The Super Bowl & Oscars
By Brad Witter
Grammys Host Trevor Noah Made Adele's Dream Of Meeting The Rock Come True
By Brad Witter
Get Even More From Bustle — Sign Up For The Newsletter
From hair trends to relationship advice, our daily newsletter has everything you need to sound like a person who’s on TikTok, even if you aren’t.