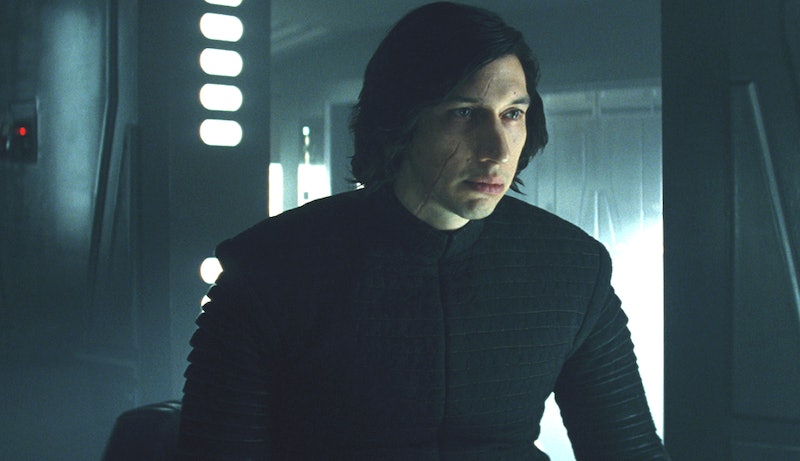 Spoilers from The Last Jedi ahead. Something beautiful happens whenever a new Star Wars movie comes out: Despite millions and millions of people going into the movie looking for answers, we almost always emerge more full of questions than we started. Did Kylo Ren tell Rey the truth about her parents? What does the final scene with the little Force-sensitive boy mean? Should we be looking for clues about the new trilogy in Episode 8? Luckily, director Rian Johnson is willing to share a few answers to all the burning questions that Star Wars: The Last Jedi left us all with.

One thing he won't do, however, is squash a fan theory. Since the film debuted in early screenings on Dec. 14, Johnson has been glancing at the conversation on Twitter, where he says "it’s about 90 percent joy and love." That's why he's not about to kill your theory — he might just offer some direction. "I think part of the fun is you know people having their interpretations of it and revisiting the movie and having arguments with their friends, I would absolutely not want to come in and play the math teacher and correct anyone," he says via phone less than 24 hours after The Last Jedi was released to the public.

So with that in mind, here's what Johnson had to say regarding a few major mysteries.

1. Was Kylo Telling The Truth About Rey's Parents?

Midway through The Last Jedi, we appear to get an Empire Strikes Back-style moment, wherein Rey learns the painful truth about parents — Kylo Ren says they're nobodies, just junkers from Jakku who ditched her and aren't coming back. It felt simultaneously shocking and anticlimactic in such a way that many fans aren't sure Kylo's words are quite true. Well, get ready to scratch your head because Johnson has a two prong answer for this one.

"I don’t think he’s lying in that moment — I think he is like telling what he saw and I think that Rey seems like she believes it in that moment. So for me, I wrote it as an honest revelation and as an honest kind of reaction to it, as opposed to a move in a game of chess," he says, effectively knocking down the theory that Kylo was just saying anything he could think of in order to get her to join his side.

But then the plot thickens. "Now as we know in these movies, you know the whole idea of a certain point of view comes into play and as you know I’m not involved in writing the next movie. JJ [Abrams] and Chris [Terrio] are writing it so, I want to make it clear I’m not sure how it’s going to get resolved," he adds. "For me the important part was saying it was an emotionally honest revelation, I feel like it, I don’t know, I believed it."

Basically, since Johnson isn't privy to what's coming down the line in Episode 9, per se, it's entirely possible that Kylo could believe he was telling the truth, without actually knowing it. It's also worth noting that "junkers from Jakku" isn't exactly an identity, and that could still stand to be unpacked further. Tl;dr: Nothing's final until the credits roll on Episode 9, y'all.

2. Does The Little Boy In The Closing Scene Have Anything To Do With The Story or Future Trilogies?

In a stark contrast to most Star Wars films, The Last Jedi closes with a shot of a character we don't really know — alone, in a hangar, exhibiting what looks like an inkling of Force-sensitivity. And if you thought this boy was a symbol, rather than a brand new character or even the subject of Johnson's impending brand new Star Wars trilogy, you're on the right track.

"For me it was more about this movie, and for me it was all about this personal notion. Luke has now given this spark of hope back to the galaxy and the idea that this legend of Luke Skywalker is now going to spread anew and inspire the next generation and then what Luke did at the end was about more than saving a group of 20 people in a cave," he says. "The real purpose of it is seeing that final scene, that was more kind of the emotional payoff for me, the notion that finally the galaxy is ready. The seeds of resistance are going beyond a little group of soldiers, and to the rest of the galaxy now thanks to Luke Skywalker."

If that doesn't give you goosebumps, I think you need to watch this movie again.

3. Does The Last Jedi Connect To Johnson's Trilogy At All?

In a word, nope. (Unless you just mean that it happens in the same universe and will still feel like Star Wars.) The new trilogy is totally and completely different. In fact, it seems like there may not even be any characters in common.

"Its totally separate," he says. "Each individual story is different, yeah so I’m not sure I know that whatever the next trilogy is going to be, it’ll be a totally different story, have different characters, as it needs, and probably some differences in tone. At the end of the day I was trying to make a good Star Wars movie here and I’ll be doing the same thing with the trilogy."

Judging from The Last Jedi, I think he'll manage.

4. Where Did Leia's Jedi Skills Come From??

This film is full — so freaking full — of shocking moments, but one is particularly startling. After Kylo Ren decides against firing on the captain's deck where his mother, Leia, is standing, another Tie Fighter pilot does it for him, sending Leia flying out into space. We find her, nearly frozen, before her fingers begin to twitch, she harnesses the Force, and pulls herself back to safety in one of the most moving moments in Star Wars history. Apparently, this is something Lucasfilm boss Kathleen Kennedy has been trying to make happen for a while now.

"It was something that Kathy Kennedy would always bring up when we were having story talks. Why doesn’t Leia ever use [the Force]? She has this power inside her what was the choice to not do that? And I knew there wasn’t really room in the movie to go into her decision to never go that route like in life, broadly, but I thought it would be interesting — I thought it would be very emotionally powerful — to have a moment where you see that potential in her realized," he says.

But for those fans jumping right to the idea that Leia has just been a secret Jedi this whole time, it's not quite the same as moments like Luke finally summoning his lightsaber on Hoth, per the write and director. "It’s not a 'let’s concentrate and do this' [moment], it’s a more instinctual movement ... It’s a drowning person driving their strength to the surface and the idea that this potential inside her would manifest in that way as opposed to in a calculated way, that seemed really right and it seemed like something I wanted to see from Leia, and it felt really powerful to me."

Yeah, dude, you betcha it was powerful.

Apparently, Johnson didn't even notice the similarities until a little birdie pointed it out to him. A little birdie named Oscar Isaac.

The scene occurs at the end of the film, when Poe finally meets our girl Rey. She introduces herself, and with a wildly sexual glow in his eye (to be fair, Isaac always seems to have this), he says, "I know."

"Oscar noticed — Oscar pointed it out on set, like 'Oh it’s kind of like in different context, like our version of I know,'" he says. "When I wrote it, I wasn’t even explicitly thinking of that, although maybe subconsciously it felt right because Oscar— Poe has a lot of Han in him."

And hey, if Abrams and Terrio decide to come through on what is largely perceived as sexual tension between Poe and Rey, that line just might end up being the line that lights the spark of another classic Star Wars 'ship.

Bonus Question: Was There A Star Tours Reference In The Battle On Crait?

"Yes! Yes!" Johnson says, adding that the red salt canyon run the Millennium Falcon takes during the Crait battle is meant to replicate "the comet scene in Star Tours" — yes, he's talking about the classic Disneyland and Magic Kingdom ride.

"It’s something that, occasionally in FX reviews, that everyone would sort of look at me and give me a side eye view. But yeah I remember lining up for the original Star Tours when I was a kid waiting for three hours in line, I saw that original one so many times," he says.

And if you, like Johnson, miss the old, original Star Tours — you know the one that they used before they started randomizing bold new missions and bringing in Finn and Poe for support — you've now got the perfect little homage, nestled in a battle for hope and truth at the end of The Last Jedi.