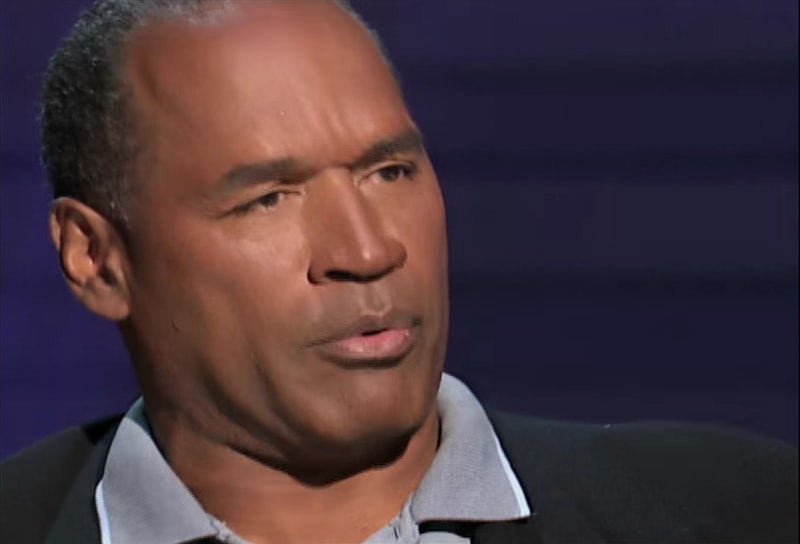 In a years-old interview aired for the first time Sunday night on FOX, O.J. Simpson described how he would have "hypothetically" murdered his ex-wife, Nicole Brown Simpson. In relaying how he'd carry out that hypothetical crime, Simpson repeatedly slipped into the first person. But did Simpson ever confess to the crime?

According to FOX, the interview was initially shelved because the victims' families were concerned that Simpson might profit from its airing. Since then, Simpson served nine years for unrelated armed robbery and kidnapping charges. Terry Wrong, the executive producer of the interview special, told FOX that the families were aware that it would be aired and that they supported the decision.

"Their thinking is we know he’s free again, we know him and we’ll think he’ll hang himself in this interview by implicating himself, so let’s see it," Wrong told FOX. "Let everybody see it."

The portion of the interview where Simpson describes how he would have "hypothetically" murdered Nicole and her friend Ronald Goldman is intense. Though he reiterates that the details he provided were hypothetical, Regan often asks Simpson to recount the night as if it were fact, and Simpson often responds with what are portrayed as legitimate memories.

If the question is "Did O.J. Simpson confess to the murders?" the answer is a little gray. Simpson never says he murdered Nicole and Goldman, but he does walk a very thin line.

In the interview, Simpson describes the night in question. The way he tells it, a friend named "Charlie," whom he does not describe in any detail, told him he "wouldn't believe what was going on" at Nicole's house that evening. That was enough to peak Simpson's interest, and the two men went to Nicole's home investigate.

Simpson described hypothetically parking in an alley, putting on a wool cap and gloves, and reaching under a car seat for a knife. At this point, most of what Simpson says is in the first person.

"I always kept a knife in that car for the crazies because you can't travel with a gun," he explained to Regan in the interview.

When Simpson and Charlie arrived at Nicole's, Simpson said he saw candles in the windows and heard music playing. Then, Goldman arrives, and the two get into an argument.

"We started having words about who was this guy, why was he here," Simpson explains. Nicole comes outside at this point and tells Simpson to leave, which Simpson said he didn't like.

Charlie still has the knife in this moment, Simpson says, and the two follow Goldman into the home. Shortly thereafter, he says, Nicole fell to the ground, and Goldman allegedly postured as though ready for a fight. Simpson said he asked Goldman if Goldman thought he could take him in a physical altercation. Then, Simpson said, he grabbed the knife from Charlie.

"After that, I don't remember," Simpson said, explaining that he blacked out.

As Simpson tells it, by the time his memory returns, he sees blood everywhere, and Charlie is screaming that they need to leave. "It was horrible," Simpson said. "It was absolutely horrible."

According to Simpson, he then went home to clean up before rushing to the airport for a late-night flight to Chicago, where he was scheduled to compete in a golf tournament the following day. The next morning, he says, the LAPD called him and told him that Nicole was dead.

What ensued is a well-documented series of events wherein the police eventually requested that Simpson turn himself in, which he refuses. From there, a car chase temporarily captures the country's attention before Simpson ultimately gives himself up.

Simpson was eventually acquitted at the end of a trial often referred to as "The Trial of the Century," but the case became one of the most notorious controversies in recent American popular history. Whether or not Simpson committed the murders grew into a divisive question, and it often seems as though everybody has an opinion on the matter.

As for Simpson, he said that one of the worst parts of the legal battle that ensued was how many people in the public thought he was guilty.

"It's almost like Ron and Nicole were physically dead, and it's almost like they killed me," Simpson said. "Who I was, was attacked and murdered also in that short period of time. And once again, to this day, it bugs me that it seems that people wanted me to be guilty. And that really really really bothered me."