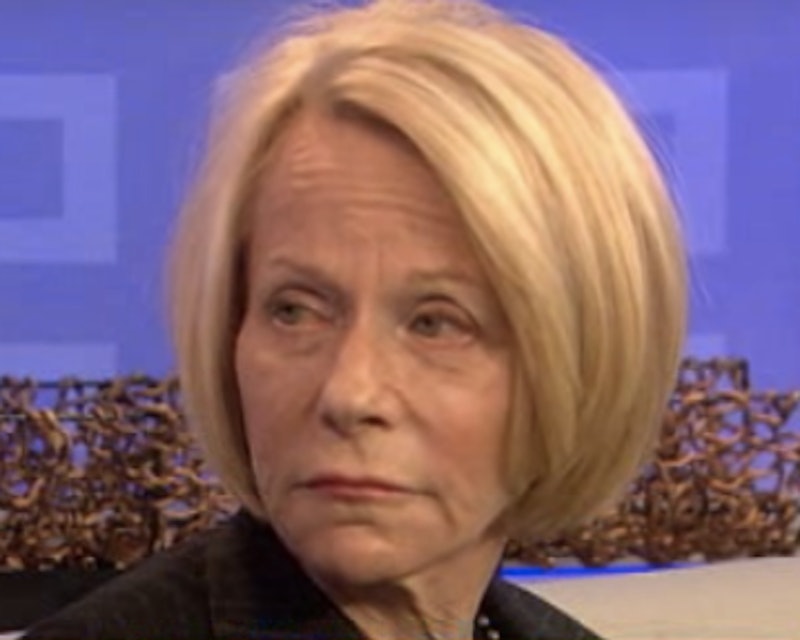 The new HBO movie The Wizard of Lies takes a look at the Bernie Madoff scandal, one of the most notorious financial scams in American history. The film stars Robert De Niro as Bernie, while Michelle Pfeiffer portrays his wife, Ruth Madoff. And while Bernie is currently saving a 150-year prison sentence for his crimes, Ruth was never charged with anything relating to the scandal. But did Ruth Madoff know what her husband was up to? She's maintained her innocence, but people continue to speculate about what potential knowledge she could've had.

Wizard of Lies makes the case that Ruth did not in fact know about Bernie's crimes. Rather than focusing on the machinations of Bernie's Ponzi scheme, the film instead spends a lot of time looking at the effect Bernie's actions had on his family: his two sons, Mark and Andrew, as well as Ruth. The movie posits that none of them knew what Bernie was up to, and that he had been lying to them about his business dealings for many years (hence the film's title). That, too, has always been the narrative pushed by Bernie in public: That he knew what he was doing but kept it from everyone else, leaving him and him alone to face jail time while the rest of his family avoided any charges of wrongdoing.

Ruth has maintained that she was ignorant of her husband's illegal dealings, and she's never been charged with any crimes. But not everyone believes her. Speculation ramped up in the time following the scandal that Ruth knew something after her sons, Andrew and Mark, cut off communication with her when she remained loyal to Bernie after they turned him in. However, Andrew told Matt Lauer on the Today Show that he never suspected his mother actually knew anything, and claims she attributed her loyalty to love and having been married to Bernie for 50 years.

Some have also suspected that Ruth must have known something because she worked for Bernie's firm, and by some accounts was heavily involved. A Vanity Fair profile on Ruth published in 2009 by Mark Seal paints Ruth as being both the bookkeeper for her husband's business and as someone invested in some of his many shell companies. Seal also brings up her mysterious withdrawal of over $15 million just days before Bernie confessed his Ponzi scheme to his sons that she overheard, and which led to his arrest when his sons turned him in. In response to the article, Ruth and her lawyer, Peter Chavkin, released a statement that claimed she "did not know of or participate in her husband’s wrongdoing and all financial decisions, including Cohmad, the running of all Madoff companies, and investments in vehicles like Madoff Technology were made by Bernie for Ruth without Ruth’s participation."

To this day, there's no concrete evidence that Ruth was ever involved in Bernie's crimes, andThe Wizard of Lies depicts her as a woman who is shocked by her husband's actions, unaware of and horrified by any of his illegal doings.

More like this
Where Is Dr. Cline Now?
By Morgan Leigh Davies
UK Viewers Will Have To Wait To See Jessica Biel’s Killer Housewife Series
By Rachel Mantock
Justin Timberlake’s ‘Candy’ Character Really Investigated Betty Gore’s Killing
By Brad Witter
IRL ‘Staircase’ Characters Todd & Clay Peterson Still Think Their Dad Is Innocent
By Gretchen Smail and Rebecca Patton
Get Even More From Bustle — Sign Up For The Newsletter