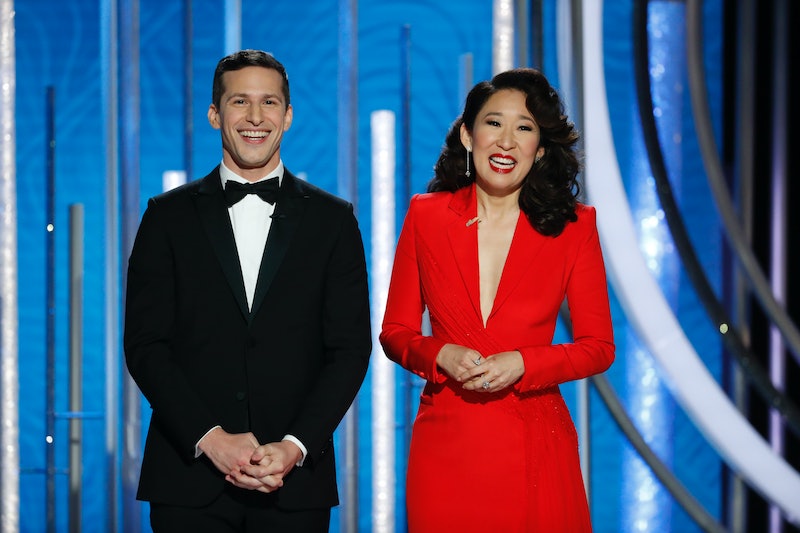 Even though Sunday, Jan. 6 is already deep into flu season, that didn't stop the 2019 Golden Globes from giving out flu shots — or did they? Hosts Sandra Oh and Andy Samberg introduced the gag during the show and it's not currently known if these shots were actually given out at the Beverly Hilton, but stars looked genuinely freaked out by the segment that occurred between award announcements. (Bustle reached out to the Golden Globes for comment on the flu shots, but did not immediately hear back.)

It seemed to happen all so fast, just like an actual flu shot. During the Golden Globes broadcast, Oh and Samberg said they wanted to do a down-to-earth segment in which themselves and the celebs in the audience seemed totally normal — just like us. In the past, award shows have done this with food gags, like giving out sandwiches (as Jimmy Kimmel did at the Emmys one year) and ordering pizza (as Ellen DeGeneres famously did at the Oscars). Oh and Samberg decided to go one step further and offer flu shots while chanting, "Shots! Shots! Shots!" to the tune of the LMFAO song of the same name.

But could have this been possible? Can flu shots just be given anywhere — including a major Hollywood awards show? I personally have gotten flu shots at Rite Aid and my office, which were carefully administered by healthcare professionals. I was also given paperwork to look over and sign before the needle ever touched my skin.

You can get flu shots at your local drugstores and, in certain areas, you can even order a licensed healthcare professional to administer your flu shot at home with a service called Heal.

However, it's dangerous to just give out flu shots to anyone and everyone without taking a proper medical history, due to what is contained in the injection. Before every flu shot, healthcare professionals usually ask about your allergies — and if they include egg, because some flu vaccines are made using egg proteins, according to the Mayo Clinic.

Oh and Samberg commented that these supposed flu shots came "straight from the Rite Aid at Echo Park," but a Los Angeles nitpick: Echo Park is a neighborhood that is located on the other side of the city from the Beverly Hilton in Beverly Hills. Echo Park is located on the eastern part of LA, while the Beverly Hills is in the western part — and as most Angelenos like myself know, going crosstown can be made way harder than it needs to be thanks to the infamous LA traffic, so we rarely do it. In fact, there's a Rite Aid about a mile from the Beverly Hilton — so why not get the shots from there? But I digress.

In any case, the gag seemed to really resonate with celebs, causing much more looks of fear than amusement.

It's hard to tell if those flu shots were given without taking a medical history (or at least asking about an egg allergy) or if they were fake needles, but at least Oh and Samberg's gag had good intentions — to make us laugh during flu season.

More like this
Britney Spears & Sam Asghari Called Out Kevin Federline’s Claims About Her Kids
By Grace Wehniainen
Jamie Foxx Revealed The Question That Got Cameron Diaz To “Un-Retire”
By Grace Wehniainen
Willow Smith & Camila Cabello’s “Spiritual Experiences” Led To “Pyschofreak”
By Grace Wehniainen
Are John Legend & Kanye West Still Friends? The Singer’s Latest Update Is Candid
By Brad Witter
Get Even More From Bustle — Sign Up For The Newsletter