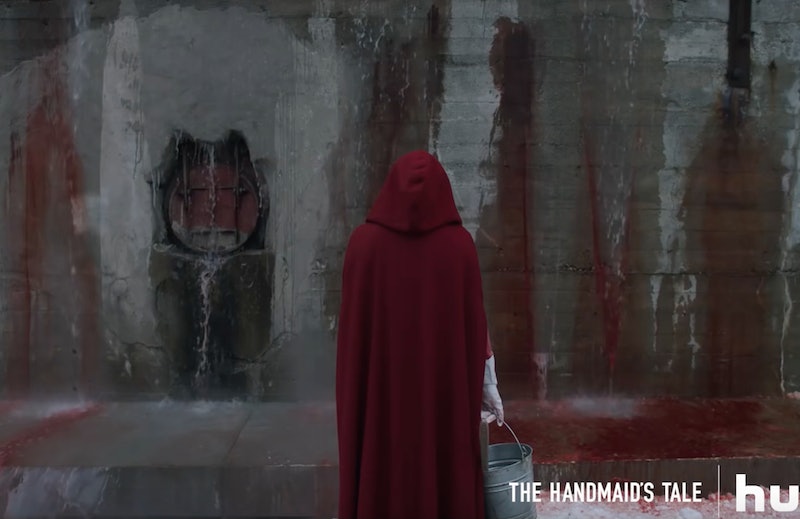 It's not long now until The Handmaid's Tale hits Hulu — and Margaret Atwood's 1985 novel is feeling more relevant every day. In a recent New York Times essay, Atwood addressed the question we've all been asking: is The Handmaid's Tale a prediction of Trump's America — one that's now coming true? It's a fascinating and beautifully written piece (did you expect anything less from Atwood?) that makes clear just how strongly The Handmaid's Tale still resonates today. If there was ever a time to introduce a whole new generation to the story, as the Hulu adaptation is bound to do — that time is now.

In her essay, Atwood says there are three questions she is most commonly asked about her iconic novel: is it feminist, is it anti-religion, and is it a prediction? To tackle the feminism question, Atwood must first clarify her definition of a feminist novel: "a novel in which women are human beings — with all the variety of character and behavior that implies — and are also interesting and important, and what happens to them is crucial to the theme, structure and plot of the book." The Handmaid's Tale, in which women are terrified into supporting an oppressive regime, in which women fight for power over each other, in which women can be sadists and opportunists as well as victims, most certainly meets that criteria.

Is it anti-religion? Atwood doesn't think so, but it is "against the use of religion as a front for tyranny" — which is a very real phenomenon in the U.S. As Atwood explains, many totalitarian regimes "have ruled behind a religious front. It makes the creation of heretics that much easier."

And finally — is The Handmaid's Tale a prediction? When Atwood was writing the novel, back in the spring of 1984, she never intended it as a prediction — "because predicting the future isn’t really possible: There are too many variables and unforeseen possibilities." Instead, Atwood had a more positive intention for this book, leading her to describe it as an "antiprediction": "If this future can be described in detail, maybe it won’t happen."

In her essay, Atwood goes on to call that "wishful thinking" — but the power of books should never be underestimated. Hulu's adaptation is about to breathe new life into The Handmaid's Tale — and that might be exactly what we need.