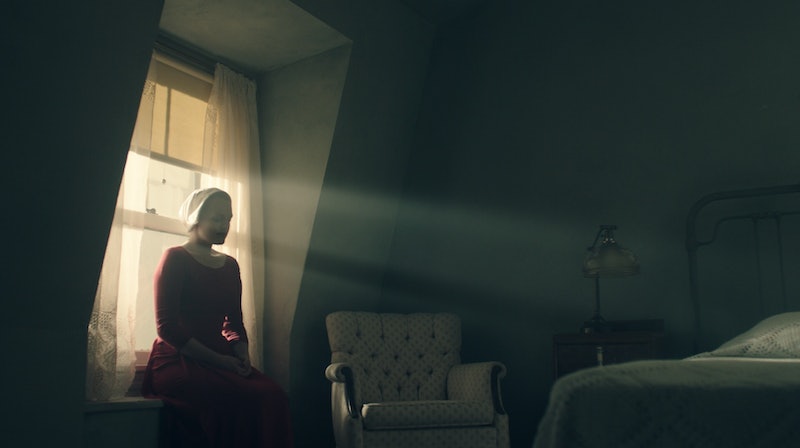 After news broke that Rory Gilmore, sorry Alexis Bledel, would be joining Hulu's The Handmaid's Tale, a whole new crop of fans jumped on board. The first official trailer for The Handmaid's Tale was released on Saturday, and by the looks of its haunting visuals and stark cinematography, it's certain that even more viewers will be recruited. Thanks to the teaser's effectiveness on building just the right amount of paranoia.

The Handmaid's Tale has all the makings of a dystopian home run. Vague and worrisome lines such as "I had another name, but it's forbidden now. So many things are forbidden now" and "Ordinary is just what you're used to" clutter the 30-second clip. Quick snapshots of a bleak, grey color scheme, intermixed with pops of red, fall into quick succession. Then, there's the overwhelming sense of inescapable patriarchal oppression.

OK, so that last one's hard to garner from the trailer alone. But if you're a fan of the source material, or have read up on the series, then you know what I'm talking about. The Handmaid's Tale — at least the 1985 novel by Margaret Atwood — was something of a portent for female activists in the '80s. Ronald Reagan was president during the time Atwood penned the novel and let's just say Reagan wasn't the strongest advocate for the female population. At the time, the novel felt more imminent than wildly fictitious.

The link between contentious politics surrounding abortion in the '80s and the parable of Atwood's novel isn't hard to recognize. Set in the "Republic of Gilead," the women in The Handmaid's Tale are valued only for their ability to bear children. Elisabeth Moss' character Offred is one of these women. Unfortunately, the misogynistic totalitarianism that plagues her doesn't seem as fundamentally outlandish as it should in 2017.

Unlike the other Handmaids (who have probably long given up hope), Offred the protagonist "intends to survive." We know this because she explicitly states so in the trailer. And thus, the journey for the 10-episode series has been set, and the question proposed. In this terribly tyrannical society, formerly known as the United States, how will Offred survive?

What isn't blatantly clear in the trailer, but is laid out in the official Hulu synopsis, is Offred's quest to locate her long-lost spawn. According to Hulu, Offred has "one goal: to survive and find the daughter that was taken from her." That seems like two goals to me, but worthy goals nevertheless.

To achieve the goal(s), she will need help and will certainly face resistance. Here's where the supporting characters — Bledel, Joseph Fiennes, Samira Wiley to name a few — come in. By the look of Wiley's face in the above trailer, this journey will be dark, troubling, and unpromising. In other words, it will be exactly what you'd expect to find in Gilead. (And hopefully not what we'll actually be forced to face in the future.)

More like this
Bill & Frank’s 'The Last Of Us' Episode Has Twitter Emotionally Wrecked
By Alyssa Lapid
Yes, 'The Price Of Glee' Is Available To Watch In The UK
By Catharina Cheung
Netflix Shut Down 'Bridgerton' S3 Rumours About A “Very Dark” Storyline
By Bustle
'Wednesday' Star Emma Myers Thinks A Wenclair Storyline Is “Possible” In Season 2
By Alyssa Lapid
Get Even More From Bustle — Sign Up For The Newsletter
From hair trends to relationship advice, our daily newsletter has everything you need to sound like a person who’s on TikTok, even if you aren’t.