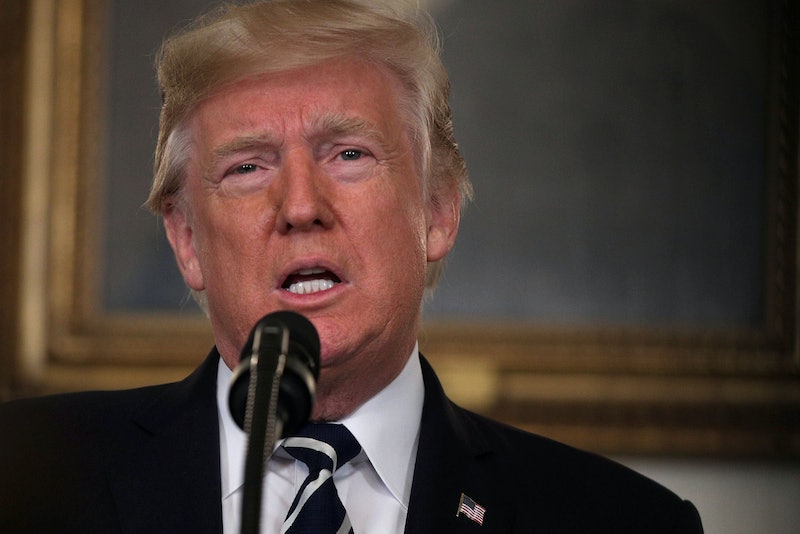 On Sunday night, a shooter fired hundreds of shots into a crowd of 22,000 concertgoers. And when he spoke about it on Monday morning, Trump didn't mention guns in his Las Vegas speech. While it's unclear exactly what weapons the gunman used in the attack, it is clear from the speed of the shots that he was using automatic weapons — and yet the president, in his address, didn't mention anything about the deadly weapons used to carry out the attack.

The shooter "brutally murdered more than 50 people and wounded hundreds more" in "an act of pure evil," Trump said in his remarks. He pledged his and Melania Trump's prayers to the victims and their families and loved ones and quoted scripture. He fell back on the image of dark spaces "brightened by a single light" and said that "we pray for the day when evil is banished and the innocent are safe from hatred, and from fear."

Instead of prayers for the banishment of evil, though, repeated polls have shown that a majority of Americans favor increased gun control. If the attacker hadn't had access to the multiple automatic weapons, including at least 10 rifles, that authorities found in the hotel room where the gunman was acting from, he could never have carried out an attack on this scale.

James Gagliano, a law enforcement analyst for CNN, said that the shots sounded like they were coming from "a belt-fed weapon, a military-style weapon." The NRA, which donated over $30 million to Trump's campaign and greatly helped him and numerous other Republican representatives win their elections, wants civilians to be allowed to have military-grade weaponry. They have reams of excuses for why assault weapons with large magazines should be allowed in civilian hands. They continually push in the courts for the Second Amendment to cover more and more powerful guns. At the same time, they oppose all additional background checks. With all that NRA money fueling his campaign, it was always unlikely that Trump was going to comment on the actual weapons that made the attack so deadly. And unsurprisingly, he didn't.

Trump did bring up the gun control memorably once — in June, after the terrorist attack in London carried out using knives and a truck. "Do you notice we are not having a gun debate right now?" he wrote, before going on to attack London mayor Sadiq Khan. Based on the speech he's just given, Trump apparently still doesn't think it's a good time to have a gun control debate now.

Given the sheer scale of the attack — at least 58 people killed, at least 500 injured — no guns rights activist can legitimately claim that knives would only replace guns as the source of violence if guns were outlawed. Given the fact that the shooter was positioned high up in a hotel room across the street, no guns rights activist can attempt the counterargument that more guns in the hands of concertgoers would have brought the shooter down faster. This "act of pure evil" only took place because the gunman had access to all of those weapons. No matter what the NRA or its surrogates in government might say, that's a fact. The availability of military-grade automatic weapons was the key factor in what made this attack so very deadly, plain and simple, and yet Trump couldn't even say the word "gun." He did, however, mention God six times.