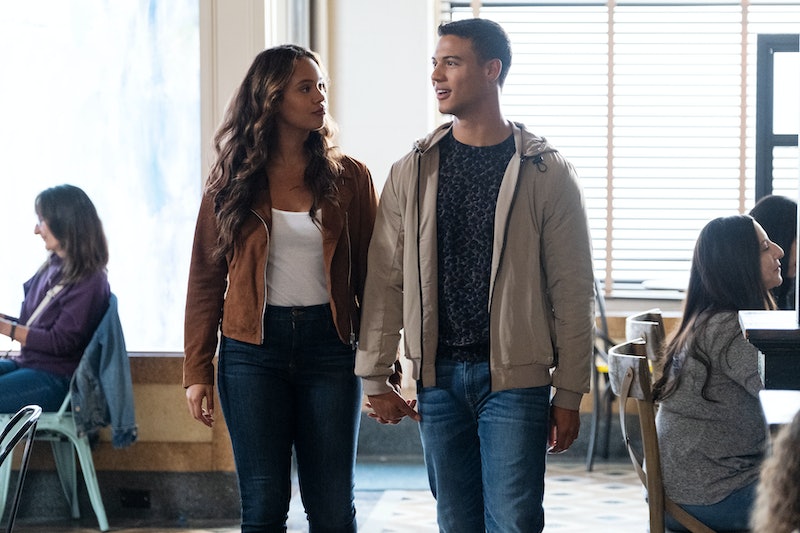 Spoilers for 13 Reasons Why Season 4, Episodes 1-8. There's a new love interest on 13 Reasons Why for Jessica named Diego and the whole situation is pretty complicated. Last season, Jessica was dating Justin, but when he comes back from rehab in Season 4, he breaks up with her so he can focus on staying clean. Jess is heartbroken, especially after she waited for Justin all while he was in rehab. But she soon finds herself drawn to Diego, a football player who's on a quest to prove Monty didn't actually kill Bryce.

The two strike up a flirtation in Episode 3 when Jess gives a talk about consent to the football team. Most of the players are messing around and not listening, but Diego tells them to shut up and "listen to the lady." Jess schools him on why it also isn't OK to just refer to her as "the lady," but she clearly appreciates Diego standing up for her — especially because Justin is also there and says nothing on her behalf.

Later, at the Valentine's Day dance, Diego comes up to Jess to say that he can help her make Justin jealous. It's a proposition that sounds good to Jess, who is still pretty hurt over her breakup. She says as much when Justin confronts Jess about why she's spending time with Diego at the dance. "Maybe I'm lonely," she confesses.

But what starts at a way to ease her loneliness and get back at Justin soon turns into something real for the both of them. And by the camping trip in Episode 4, they're constantly together and kissing. Both Clay and Ani are mad at Jess for spending so much time with Diego —  he is hunting for the truth about Monty, after all. But Jess is insistent that she can handle Diego and that she's fine.

While Clay and Ani are trying to convince Jess to stop seeing Diego, Winston is trying to get Diego to stop seeing Jess — because Winston thinks she may be involved in framing Monty for Bryce's murder. "Jess is playing you," Winston tells Diego in Episode 5. Diego insists, "No, she's looking out for me." The feelings between them are real. However, Jess is conflicted.

She knows that Diego is searching for the truth about Monty, and the truth is that Jessica helped in the coverup because she was an accessory to Bryce's murder. She also has lingering feelings for Justin, and the two of them kiss in Episode 6. But one episode later, she's back with Diego, which upsets Justin. When he asks why she's still seeing Diego, Jess says, "I can't just drop him. I have to handle sh*t."

The way she frames it to Justin is that she's dating Diego to keep him away from the truth, but there's clearly feelings there. In Episode 8, she confirms this. "I saw you with Diego today, you actually like him," Justin says to her. "Tell me you don't." Jess is quiet, confirming what Justin already knew.

But whatever romance Diego and Jess have is threatened in Episode 8 when Diego realizes that she had something to do with Bryce's murder.

During a protest at the school, Justin tries to hold Jess back from running at the cops, yelling that she can't arrested. Justin knows the danger being arrested could put her in, because if she's questioned then the police might learn that Jess watched Bryce drown that night without helping him. Diego confronts Justin about it, wanting to know why it was just Jess whom he was worried about getting arrested. Justin says nothing and Diego's eyes widen. "Jesus it's her," he says.

Earlier in the episode, Diego admitted to his friends that he really cared for Jess and trusted that she wasn't involved in anything shady. But that may all change now that Diego knows the truth.