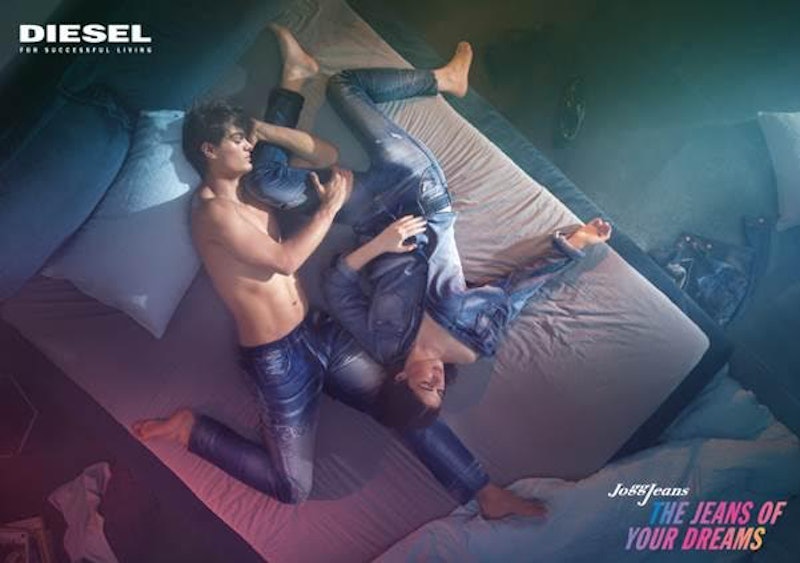 Okay, so Pajama Jeans never really took off, but what about these? Diesel has jeans that are specially designed to be comfortable enough to sleep in — so, will they become everything that Pajama Jeans promised, but never fulfilled? Could Diesel's JoggJeans actually be The Pants That Were Promised??

Well, unlike the ill-fated Pajama Jeans that have (mostly) faded into oblivion, Diesel actually has a pretty good track record fashion-wise, so they've got that going for them. Add in a press release from the brand promising that the JoggJeans are "soft and comfortable as a pair of sweatpants," and you might just have something very special. Diesel notes that the pants are actually a denim/jersey hybrid that are basically the best of both worlds, with jersey's stretch, and denim's cool factor and durability. Maybe these really will be the answer to everything we've ever really wanted out of our jeans.

The JoggJeans line has been in existence since 2011, but Diesel is giving it a new push with its latest ad campaign. Charmingly, the whole campaign is designed around sleeping — the tagline is "JoggJeans: The jeans of your dreams," and the promo images feature a bunch of chiseled models sleeping in fierce poses in their jeans.

With the whole athleisure trend taking the world by storm, this could just be JoggJeans' time to shine — who knows, maybe they'll even surpass yoga leggings as the athleisure legwear of choice.

Those models certainly look fashionably comfy, don't they? And, upon closer inspection, the pants themselves are pretty inarguably stylish as well.

The JoggJeans line has options for men and women, and includes jackets, dresses, and shorts, in addition to all the pants. All in all, it's pretty tempting, right? I mean, who doesn't want a pair of stylish jeans that feel like sweatpants in their life?