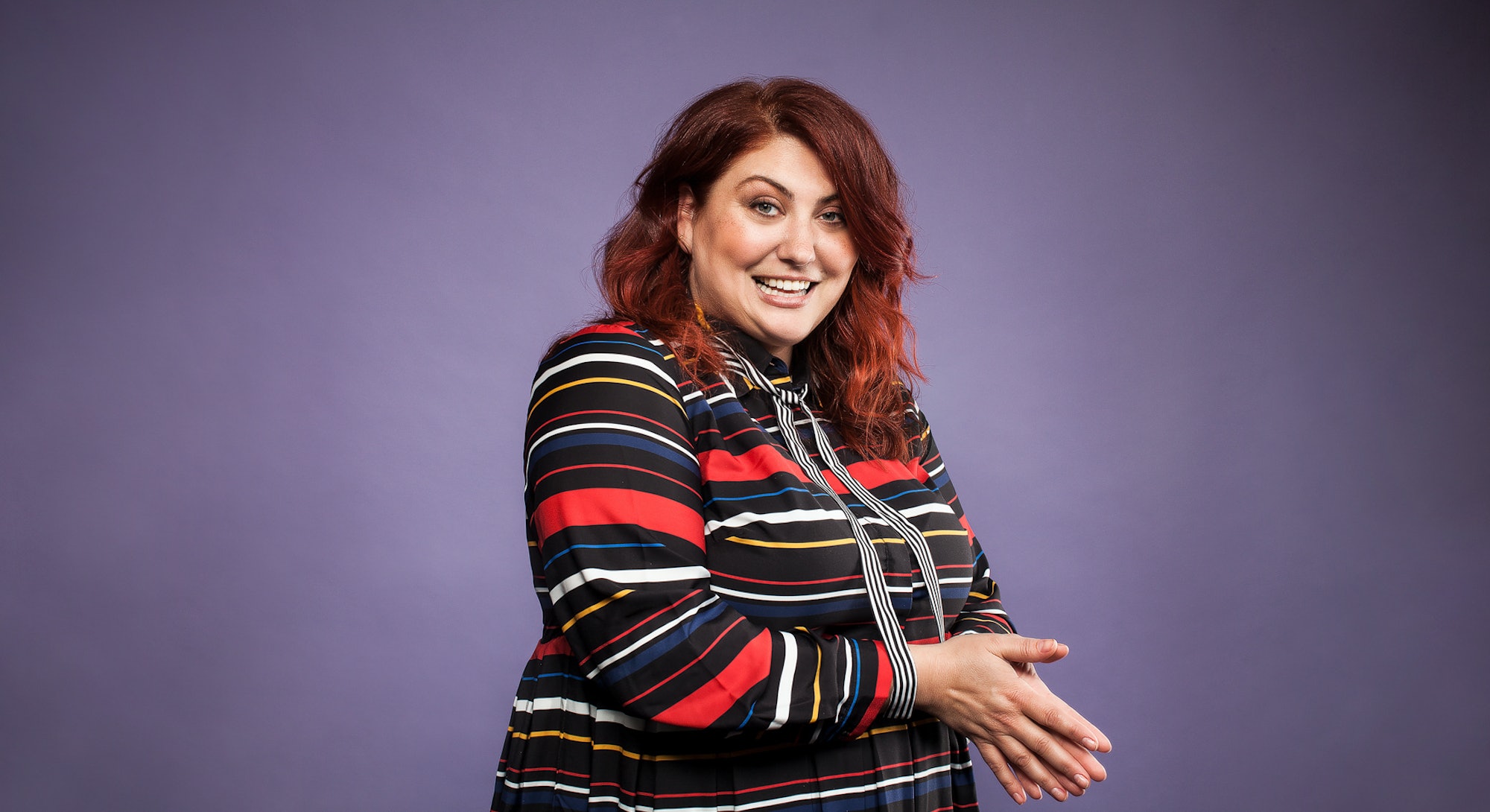 Joy Nash is heated. We've only been speaking for a few moments when things get real. It's a Spring afternoon at Bustle HQ, and she's just finished throwing women's magazines in the air for our photographer, ripping and crinkling the pages as she goes, and just as suddenly as a torn magazine page becomes a useless scrap ready for the wastebasket, our conversation turns very serious.

"I feel like we need more," she says when I bring up one of the only other plus size characters on television (This Is Us' Kate Pearson) besides her own character, Plum — the protagonist of AMC's Dietland. Plum's journey on the Marti Noxon-run adaptation of the 2015 hit novel aims to expose the darkness and insidiousness of weight-loss culture, following Nash's Plum as she becomes entangled with an underground women's group aiming to rip out society's sexist roots, from violent men to women's magazines. Dietland's representation of the plus size experience is a more indignant take on weight-loss culture than that of This Is Us' Kate, who often finds her storylines centered on her weight loss journey in a more positive, almost empowering light on the hit NBC show.

But Nash is adamant: While the reality of seeking weight loss is a legitimate experience for so many plus size women, the act of constantly striving for a different body isn't the only plus size experience available to film and TV writers. It's just the only one they choose to represent over and over and over.

I personally don’t want to hear about somebody’s diet. Like, I can’t think of anything more boring than what you ate yesterday.

"[Weight loss] is a true story for a lot of people, but there needs to be more stories," she says, her emphasis landing like a ton of bricks on the m-word. "Sixty-seven percent of the population is plus sized. We, we’re not all the same ... I feel like a lot of times there’s [representation in] media and people’ll be like, ‘That’s not my experience. That’s wrong.’ It might not be your experience, but it is somebody else’s and I feel like that’s the point. We need to have more and more and more like, kick open the door. We have important voices."

There's a pretty good reason Nash is visibly annoyed with the stunted range of storylines made available to plus size women in Hollywood: It simply doesn't represent her experience. "I personally didn’t grow up dieting my whole life. I came to fat acceptance pretty early," she says. Her statement checks out: Nash went slightly viral to the tune of 1.8 million views for her 2007 video "A Fat Rant." which takes aim at the idea that "fat" is an insult or something to be ashamed of or to evade. In what amounts to an uncanny foreshadowing of her future role in Dietland, Nash uses a good 30 seconds of the seven-minute-and-45-second video to cite statistics about the weight loss industry, most notably that 90 percent of people who lose weight on a strict diet gain it back. And while she doesn't think it's wrong to represent plus size women's stories about weight loss (after all, that is some people's experience), she just doesn't necessarily want to hear about it.

"I mean, I believe that your body is your own. You can do with it whatever the hell you want to ... I personally don’t want to hear about somebody’s diet. Like, I can’t think of anything more boring than what you ate yesterday," she says with a laugh, before shifting to a more hushed, serious tone. "As a fat person, listening to somebody else have those conversations, it’s kinda like somebody saying like, ‘My worst nightmare is becoming you.’ And that’s hard to hear. Like, it’s ballsy for somebody to say that to my face."

Nash grew up religious, and for the most part that meant little exposure to films, television, and other vessels of pop culture. ("I have a cultural blind spot," she confesses.) When I ask her when the last time she felt represented in media was, she hangs on a significant pause, before telling me she'll have to get back to me. "I'll consult my sources" about the other instances, she jokes after finally revealing that Dietland's Plum, who was only introduced into the television landscape in June of 2018, is the first character that she's truly connected with.

"I know what it’s like to wait for my life to begin," she says, referring to Plum's largely on-hold life at the start of the series. "[It's like] waiting for somebody to love you back or waiting for somebody to tap you on the shoulder and ask you to be an actress. You know?" Before Plum is recruited into the show's secret, feminist organization and forced to confront the ways she's limiting her life, the series finds Plum buying skinny clothes, living an existence as the Woman Behind The Curtain for Julianna Margulies' self-involved, image-obsessed media executive Kitty, and waiting for her life to change the moment her body does. In her own life, Nash says she "threw that away and took control of myself," almost as if offering advice to her onscreen counterpart.

And while Nash's lack of connection to other plus size characters besides Plum could be because her exposure to the industry was limited in her youth, it could also stem from the fact that representation of this segment of the population is straight up abysmal in media. At any given moment, you can generally count the number of female characters above a size 12 recurring and starring on television on a single hand (there's not even a study on this that I can reference here, because the numbers are so low they're infuriatingly easy to suss out without the help of an academic source). What's more is that according to a 2016 study by The Fashion Spot, only 1.4 percent of models wear over a size 12. Despite the momentous work of many activists and influencers to help grow the visibility of non-straight size women, mainstream media and fashion are, for all intents and purposes, somewhat devoid of plus size bodies. And yet, as Nash points out, 67 percent of American women are considered "plus size," according to a recent and oft-cited study by Plunkett Research. And there's a lot of room varied experiences (or simply "more," as Nash puts it) in that 67 percent.

Luckily, the actor says Dietland (both in book and series form) is helping to break down the walls between the population of plus size women in America and proper representation, largely because her character (slight spoiler) is not going to ever transform the way Plum desires at the start of the series. And Nash says it's revolutionary "to follow somebody like me, a fat person, who goes through a journey and is transformed, but doesn’t lose weight. That’s, like, shocking. Sadly," she says. Plum's weight loss never happens (that Nash knows of), but she won't suddenly find a better wardrobe either (or a man to prove she's alright), and there won't be a triumphant montage of her walking confidently down to the street in a colorful dress to some jaunty Diana Ross classic. Dietland gives its central character so much more than that — and that's why Nash says she feels so seen.

"I’d never read of somebody like me who is fat and the book doesn’t end with [a transformation]. Like, [Dietland] takes her seriously," she says. "Interesting things happen to fat people, you know what I mean? I feel like that doesn’t get acknowledged."

And interesting things certainly happen to Plum. In the first three episodes of the series alone, Plum finds herself being borderline stalked by an intern from Kitty's magazine Daisy Chain, before being recruited into a radical feminist society called Calliope House by a woman whose mother started one of the most notorious fad diets in history. She wants Plum to start her new program, which requires her to get off her anxiety medication and hopefully change her mind about the lap-band surgery she so desperately hopes will change her life. As a result of withdrawal from her meds, Plum spirals into hallucinations (one presents a reality in which her apartment is the jungle and a real life detective becomes a tiger-man hybrid who's both an enabler of Plum's desire to binge on take-out and an insatiable sexual partner). And as she trudges through the visions and harsh, cruel thoughts that her medication withdrawal begets, Plum's journey promises to get ever weirder, and ever closer to the path of a notorious feminist terrorist group, Jennifer, which makes itself known with the public executions of 12 previously unpunished male rapists and sex offenders. By Episode 4, the detective (the handsome one she imagined as a tiger, naturally) is asking Plum to be "a hero" and infiltrate Calliope House in hopes of helping him find a connection to Jennifer. And while Nash's character certainly prescribes to the societal pressure to be thinner (she's consistently fighting the urge to envision herself as "Alicia," the thinner version of herself in her head), the character's journey is very clearly headed somewhere else and somewhere much bigger than whether or not a piece of chocolate cake fits into her diet plan.

"Plum thinks that her life is going to like start when she’s thin, at the beginning. And then, you know, it starts way before that," Nash says teasingly.

And hopefully, by the time Season 1 of Dietland concludes, Plum — and every woman who feels seen by watching her journey — can realize that's not just a truth for a character in a wild story on a fantastical TV show, but a truth that's available to them, too.